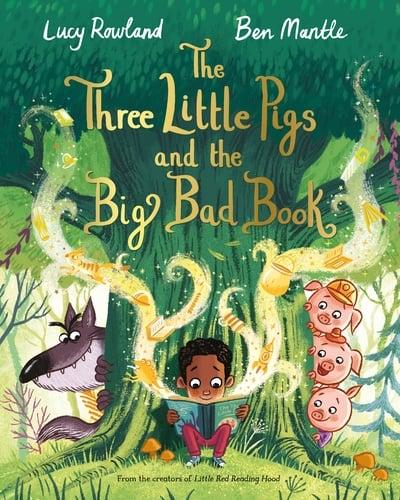 The Three Little Pigs and the Big Bad Book

A young boy and his mother settle down for a bedtime story, as they do every night. But this time, disaster strikes! Mum’s mobile phone rings when they’re only on page 7 of The Three Little Pigs leaving Ben to try to figure out what happens all by himself. He’s only little though, so he can’t make head nor tail of the strange squiggles on the page, all he knows is that one little pig has made a house out of straw, a second little pig has made a house out of sticks and a third little pig is just about to begin construction on his house out of bricks.

As Mum stays on the phone each of the little pigs arrives at Ben’s house to figure out how their adventure will continue, but they can’t read either! They CAN, however, look at the pictures and they realise that very soon The Big Bad Wolf may arrive at Ben’s house too! Will Ben and the Three Little Pigs be able to fend off the Big Bad Wolf or will this story end another way?

With fun, rhyming text and bright, engaging illustrations this makes for wonderful bedtime story to be enjoyed at any time of day or night.

The Forest of Moon and Sword

In 1647, at the height of the English Civil War, some men found fortune in witch hunting. Of course, we know that there is no such thing as witches, but clever, self-sufficient women have long been threatening to certain types of men. One such man, by the name of Matthew Hopkins, styled himself the Witchfinder General and travelled the land following rumour and hearsay to arrest women and drag them before magistrates for large sums of money.

Over the border in Scotland, a young girl named Art hides in the attic with her mother as Hopkins’ men arrive in their village.  Art’s mother forces her to run, leaving the others behind and save herself when their home is invaded. Hiding on the roof Art hears the women loaded into wagons and dragged away, when all is quiet, she creeps back into the house, finds her brother’s old clothes and her mother’s herbal handbook, she gathers her horse and sets off to rescue her mother.

As Art journeys from Scotland to East Anglia she meets many people along the way, some that would help her and others who would gladly betray her. It is up to her to judge who she can trust to help her rescue her mother from an appalling fate.

A brilliant piece of historical fiction, with palpable fear and unflinching bravery all wrapped around a great adventure.

Set in the late 90s, in an unnamed American inner-city neighbourhood, 17-year-old Maverick Carter is doing his best to figure out what direction his life will take. As a black boy on the verge of manhood, he sees two paths ahead—college and a career or drug dealing and prison. Maverick has the grades, he can go to college, he could even get a scholarship, his ticket off the streets.

All his ambitions come screeching to a halt when the paternity test, after a one-time hook-up, comes back, and that little baby boy is his. He’s seventeen years old, living with his momma, and he has to take full responsibility for a baby abandoned by his mother.

No more drug dealing for him, he has to work at the local grocery store. Homework—ha—like he has the energy for that, the baby won’t let him get a good night’s sleep! His grades are trash, his social life is non-existent. The only thing he has is an overwhelming love for his son. But man, is it tough. First day back at school there’s a nappy explosion—so much for looking his best. And babies are so expensive, they need so many things, and he can’t just buy them once—lil’ man keeps growing out of them: clothes, car seats.

Just when he thinks he has a handle on how things are going, his cousin is murdered, the girl he truly loves is pregnant, but doesn’t want to be reliant on him and he feels his life is falling apart. Overwhelmed, he falls back into old patterns, taking the easy route to earning money. But there is no future in the gang life, no future in drugs. With one baby, and another on the way, Maverick Carter needs to make choices that will affect not only him, but all those he loves. Can he step up?

This brilliant prequel to the international bestseller The Hate You Give, tells the story of Starr Carter’s dad, the man she has always known to be strong, resilient and honourable. This is the story of how Maverick Carter came to be. Angie Thomas gives us another unflinching look at life for black Americans in deprived, inner city communities, honouring the struggle while acknowledging the flaws. Families, communities, love, anger, humour, hubris—but above all—humanity. I loved it.