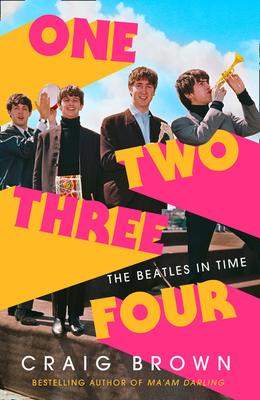 On the 50th anniversary of the break-up of The Beatles,
Craig Brown, author of a new book on the band talks to Fergus Byrne

In his 1994 interview for Desert Island Discs, Douglas Adams, who wrote much of the early script for The Hitchhiker’s Guide to the Galaxy while living in Dorset, related his story of just how obsessed he was with The Beatles while growing up. Standing in a queue to get into his local gym, he and his friends overheard someone say they had just listened to The Beatles most recent song, Hey Jude. ‘We basically held him against the wall and made him hum it to us’ he recalled.

It’s one of many stories that author Craig Brown relates in his new book, One Two Three Four; The Beatles in Time, a fascinating and extensive romp through Beatles stories that, compiled in a loosely biographical format, makes not only easy, but intriguing and entertaining reading.

For example Craig unearths the story of Eric Clague, who drove the car that killed John Lennon’s mother. Though found not to be at fault, Eric was suspended from his job as a policeman and ironically ended up as the postman that delivered fan mail to Paul McCartney’s house. His identity remained a secret until 1998. He hadn’t even known that the lady, tragically killed when she walked out in front of his car, was John Lennon’s mother, until years afterwards. Eric spent the rest of his life haunted by the memory. Up until 1998, he hadn’t even told his wife and children.

Craig Brown also manages to highlight stories like that of the Belgian singing nun, whose song, Dominique, was a huge hit around the time she and The Beatles made their debuts on the same Ed Sullivan show in America. With the arrival of The Beatles, however, the chart career of Sister Luc-Gabrielle ground to a halt. Later she left the convent to pursue a singing career with songs such as Glory be to God for the Golden Pill and Sister Smile is Dead. Along with her later album, I am not a Star in Heaven, they flopped and she became a teacher of handicapped children. Later, pursued by the Belgian authorities for back taxes that she believed the convent, which took most of her royalties, were liable for, she committed suicide with her partner Annie Berchet. Their joint suicide note explained: ‘We are going together to meet God our Father. He alone can save us from this financial disaster.’

With over 600 pages and endless sources, Craig touches on a fascinating selection of tales from The Beatles’ lives. Inevitably there are stories of some of the excesses that helped fuel the band’s notoriety. Recording engineer, Geoff Emerick, who worked with the ‘straight-laced’ producer George Martin on Beatles recordings, recalls when the band were in what he euphemistically describes as a distinctly ‘party mood’. One evening, recording Yellow Submarine, John was determined to try to sound like he was singing underwater. The band had been joined in the studio by Pattie Boyd, Mick Jagger, Brian Jones and Marianne Faithfull when John tried gargling and singing to get the sound he wanted. Only succeeding in choking he insisted on having a tank of water brought in to try to sing underwater. When that didn’t work he finally settled on covering a microphone with a condom and dipping it into a milk bottle full of water. For those, like me, unaware of that story, Yellow Submarine will never sound the same again.

Craig’s eye for a Beatles story came at a young age. He recalls being exactly eleven and a half when he asked his parents to give him The Beatles’ White Album for Christmas. He was totally enthralled, ‘luxuriating in its pure white cover’ and spending hours gazing at the ‘neatly folded’ poster that came with it. He had first heard Lady Madonna earlier that year, on a radio played by some building workers who were fixing the pool, at the catholic prep school he attended near Basingstoke. Immersed in a religiously influenced education at the time, Craig’s memory is that he decided the Virgin Mary must have been an aristocrat. His impressionable young mind had also been influenced by his older brother who had told him that Sgt. Pepper was the “best song ever written”. ‘I remember thinking that was an objective judgement rather than subjective’ he said, ‘like you’d say the Eifel Tower is so many metres high or something.’

However, although not unusual in his interest in music, Craig was in the minority for his age. ‘There were fewer people interested in pop music then in those days’ he said ‘whereas now everyone might have some records, or at least hear it on the radio. In those days it was divided into two, which was those who liked sport and then the tiny minority who liked pop. I suppose I would have known every record in the charts from about the age of nine. If I was on mastermind my specialist subject might be top-twenty hits from about 1967 to 1970.’

Despite suggesting his fascination with pop music might have put him into the minority at the time, interest in The Beatles was not a minority pursuit. Craig was aware of the excitement that surrounded the band during an era that later seemed a very short period of time. ‘They did sort of dominate your thought and there was that amazing excitement about what they’d be doing next’ he said. ‘Now you realise it was only five months maximum between each single coming out. But then it seemed like years, and there was an amazing expectancy. I remember my aunt saying “have you heard the new song”. And that’s from my aunt who wasn’t remotely interested in pop. Everyone would know what the new Beatles record would sound like. It was felt that, with The Beatles there was going to be some kind of extraordinary leap, and usually there was.’

It’s hard for later generations to understand the level of hysteria that surrounded The Beatles. They were four young boys who had to learn about the perils of fame the hard way. And it was during a time of dramatic change in the way young people reacted to the opportunities presented by adult life.
The boys’ introduction to psychedelic drugs, when their drinks were spiked by their dentist, depicts a level of naivety that reminds us of their youth. The book also details the story of how Bob Dylan introduced them and their manager Brian Epstein to cannabis. Craig said that through the process of researching the book, he found himself forgiving some of the excesses the band was often denounced for. ‘They were kids from nowhere’ he explained. ‘They didn’t have training in being the most famous people in the world. So I think I forgive them a lot more now than I would have at the time—not that I condemned them—but people did at the time. They were just people having to find their own way in this extraordinary position they were in.’

Although not intentional, the book depicts a period in Beatles history that was strongly influenced by their manager Brian Epstein, the man who one day walked down the stairs to the Cavern club in Liverpool to see them play. He eventually took his own life and has been the subject of much debate since. ‘I think you could easily argue that if Brian Epstein hadn’t gone down the steps of the Cavern club and then persisted with them that they wouldn’t have been known’ says Craig. ‘He really pushed to get them a record deal when no one wanted them and they didn’t have anyone else who was prepared to do that for them. And they didn’t have any kind of clout or contacts. But I wouldn’t want people to think that I thought Epstein was a kind of Simon Cowell figure.’

Epstein may have been a long way from a Simon Cowell type character but The Beatles were devastated by his early death. It could be argued that without Epstein’s fatherly influence the band might have stayed together longer. ‘They did slightly go off the rails then, but that might have happened anyway’ said Craig. ‘One of the things that intrigued me about Epstein was I had always seen him as this much older person and very straight and establishment. Of course, he was only thirty-three when he died, so he was older than them, but not much older. And though he seemed establishment, he was taking far more drugs than any of them. He was way out of control and miserable. So he was a terribly complex, sad figure and very reliant on them for his feeling of happiness.’

Craig Brown has been careful not to follow the normal biographical system of sticking to a specific timeline in One Two Three Four; The Beatles in Time and the book benefits from that. ‘I wanted to do a book which didn’t go with normal biographical procedure’ he said. ‘So I didn’t want it to begin with something like the birth of George Harrison’s grandfather and then go on til the last day. I didn’t want it to end on April the 10th when they finished.’

As the fiftieth anniversary of the day The Beatles broke up that is indeed a date that his publisher was aware of. Craig should have been out doing radio and television interviews about the book as debate about everything Beatle-related surfaced on the anniversary of their break-up. But like many authors whose books were set for publication this Spring, Craig’s wasn’t available to ship on the day it was published—COVID-19 had made it impossible for the warehouse to get the orders out. Thankfully it is now available to buy, at least online for the moment and it makes a thoroughly enjoyable read.