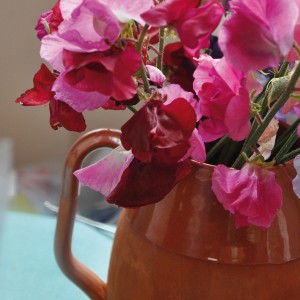 Moving from the city to the country to live the smallholding dream is not always all it’s cracked up to be – especially for the less obsessed partner of the Foodie in the family. Telling it like it is, Good Life Wife plans a wedding with the home harvest.

Reader, I’m marrying him. Since moving to Dorset we have home-grown a free range ring-bearer each plus one bridesmaid. In the first year of our thirteen together without a drama, crisis or major distraction, we are sailing away with them, our mums and two old friends to the land where the Bong-tree grows for a wedding-moon.

Back home we plan to have a celebration feast using ingredients produced by us and local friends, and transform the messy old barn into a huge dining room.

Foodie has met the meat, selecting a friend’s cow to spit roast. We still have the bespoke spit kit he put together – with typical farmer resourcefulness – for the hog roast we did with him last year. The pig was dropped off the rainy night before, mafia-style and wrapped in a sheet. My left-field younger brother got into the surreal spirit of that feast, giving the beast a last shave while asking it if it was doing anything special that weekend, and then standing it wicker-man like in the piled straw and wood before it was lit for the roast. Something told him he wasn’t in Camden any more. The children were un-disturbed by their radical dinner – though they did miss the body in the kitchen crime scene moment – merely remarking that the crackling was quite hairy. I don’t think Foodie’s razor was quite up to it.

Our chickens are laying well. We’ll use yolks for herby mayonnaise on a knobbly ratte pototo salad while the whites will be distributed to Team Meringue for making ‘Marshwood Mess’, combining a mass picking of hedgerow blackberries with the yellow Jersey cream from Modbury that’s so sweet it needs no sugar. Tomatoes of every colour and size will emerge from the polytunnel and the raised beds will serve up fistfuls of favourite lettuces.

I’ve been eyeing up the barn for a while and inviting over 100 people to come for a sit down lunch in it is focussing the mind nicely. So far I’ve got by with just pushing the junk into the corners and covering it up with straw and hay. My Seventies childhood has given me a life-long fondness for putting Indian cotton bedspreads over scruffy furniture (and even piles of paperwork and laundry when someone comes to visit).

In the barn I’ve discovered that hay and straw can do the same job. Like snow it dispels any chaos, modelling all it scatters over into pleasingly uniform curves – though the health and safety implications for children’s parties have been quite scary. DON’T jump on that nice-looking hay. It’s not actually nice.

But this event calls for a total clear out and, like stones keep coming out of the earth no matter how many times we clear them, junk keeps on emerging from the barn – delivering layers of history like a small, domestic archeological dig. In amongst the wood, scrap and straw there are signs of long-gone teenagers, a warped damp darts board and a bent CND badge. Beneath that there are ancient livestock medicines (that must NOT find their way into Drama Queen Eldest’s Harry Potter potion-making kit) and beautifully fine but rust-crumbling old tools. And under it all, at ground level, metre upon metre of baling twine that pulls endlessly out of the soil like bindweed roots.

The brink of marriage has me reflecting on what I love about Foodie. And what is infuriating. He has a kitchen style that is best described as medieval. Even in a city terrace he could make the room gothicly messy but in an old farmhouse he can go the whole way. He is captivated by the epic, lumpy flagstones – inspite of the maddening gaps that seem able to collect even more of the kids’ food droppings than the car. Part of me thinks lino would be just GREAT. But I know it would have to go over his dead body, and then there would be another awkward lump to contend with… I also distract myself when sweeping the impossible raw floor by imagining I’m snorkelling over an exotic stone sea bed, and looking out for flashes of neon fish, rather than stray bits of bread stick and carrot.

But out of that cave of a kitchen come delicious and beautiful offerings, transient treasures like a large pot of blackcurrant jam that he makes late on Sunday night and leaves out for me to find the next morning. It distills a sunny afternoon of Groovy Youngest’s picking efforts to capture the last of the bushes’ bounty before the birds. It’s the taste of his fourth summer. Cooking as the alchemy of love.

When Foodie’s not in and out of the beloved and burgeoning polytunnel – emerging with courgettes that are growing as fast as long party balloons and posies of tissue-papery sweet peas – he’s clucking round the two youngest chicks of the summer’s clutch. They had the bad luck to have their eggs stuck under the nervy powder-grey fluff ball who’s not taking to motherhood. He notices that the smaller of the two is listless and has got a lump of pooh stuck on its bottom. He carefully takes out this sad scrap, gets a tap dripping warm water to wash it then asks me to dig out the last of our babies’ Sudocrem and some Vaseline. In the midst of this I remember that a chicken’s bum is referred to as its vent (it’s what?!) and try not to think about whether that’s where the phrase ‘to vent one’s spleen’ comes from. I don’t think the kids’ medicine cupboard will cover that one.

Having cleaned it up and dotted on the creams he holds it in his hand and says it’s dying. It has stopped moving, making any sound and its eyes are slowly closing. It’s shorter than his thumb and the embodiment of hopelessness. I feel resigned but he wants to keep trying….OK, back up to the bathroom for a hotwater bottle and the plastic medicine syringe that we used for the children when they were tiny. He wraps the chick in a napkin off the table from lunch and puts it inside the cover of the not too hot bottle. You can see it reviving, eyes opening again as he gets some drops of sugar water into its minute beak. There is faint cheeping and it looks like Helpful Middle won’t be digging another tiny, stone-decorated grave.

It’s still rather miraculously alive the next morning when Foodie is away to work on the early train. He leaves me with our last pot of Sudocrem and the mixed feelings that this really is back of beyond the call of duty – and it’s also good to be getting hitched to someone willing to work out how to bring chicks back to life.