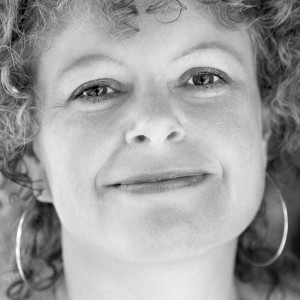 “I believe that what we eat, how we eat it and the circumstances in which food is produced has a profound impact on our sense of well being. Poor quality food results in ill health and the fact that people on low incomes may be forced to rely on poor quality food really concerns me.

I’m a Buddhist, but a struggling Buddhist really because a lot of Buddhism doesn’t come particularly naturally to me. I find it quite hard to be a still person and I find it very hard not to be greedy. I love everything about food, the texture, the taste, the preparation of it, the feeling of satisfaction it gives and its sensuality. But it’s very difficult when you feel like that about food to know when to stop, to know where the boundaries are.

Usually the Buddhist retreats I go on are vegan. The food is incredibly healthy and it’s cooked mindfully and whenever I’m on retreat I suddenly find that the food is incredibly energizing. I think we’re addicted to certain kinds of taste hits and when you eat food that doesn’t contain those kinds of flavourings it takes a while for your palette to adjust, but it’s a completely different sensual experience, and a preferable one.

I find if I get stressed then food is usually the first port of call and it then becomes very difficult to do the things that would actually be healthy for me. And I think that’s generally true for people who have a tendency towards obesity.

I don’t think I’m addicted to unhealthy food in itself but rather to the sensual process of eating. I find it very difficult to lose weight. Once I’m on a really strict diet I can do it, but the minute I come off the diet it’s very difficult to keep that balance and a healthy, measured attitude towards food. It seems to be an either or thing for me. I know from my work as a psychotherapist that it’s an issue that most women have.

The psychological role that food plays, especially in the lives of women, is a significant issue for many of us. Size zero absolutely infuriates me. One of the things it does to women is damage their sense of their own physicality, sexuality and beauty. For a whole variety of industries to make profit out of women’s insecurities about their appearance is utterly objectionable

I can’t think of a woman I know who hasn’t been impacted in that way. If you look at what makes full-blown anorexia, that excessive self-control and a sense that even when you’re thin you’re never good enough is really integral to how the disorder works. Women’s relationship with food is mediated by this idea that you’re only sexually attractive if you look like a fourteen year old and that’s pernicious.

I’d like women to be able to become aware of the relative value of their own wants and needs in comparison to these external pressures, be able to see them as external pressures and be able to steer their own way. So they know that who they are and what they need is more important. So if their husband says I only find you attractive if you’re really, really skinny and they don’t want to be really skinny they can say well I’m sorry but I do like eating food and I want to look like this and feel ok about it.

When I was growing up my mother used food as a reward system and it was also something that was restricted. So that’s why it became so conflicted and important for me. I got food when I was good – and I was an extraordinarily naughty child – and I wasn’t allowed to have it when I was bad.

When I left home to go to Oxford University I was well known for going into peoples’ rooms and clearing out all of their biscuits. I went to Christchurch and it was only the second year that it had been open to women so virtually all of my friends were men; all these very gentlemanly Etonians and public school boys would invite me round to their rooms and I’d fend them off and then eat all their biscuits!

Something similar happened to my sister. In her first term at university she developed a perforated stomach ulcer and nearly died because, released from home, she could suddenly buy food whenever she wanted it and eat more than she’d ever been allowed to before. All of the boundaries were released and we were suddenly able to access food whenever we wanted to.

I didn’t develop a natural sense of self-control. The issues about not being allowed and being allowed definitely come from my mother. She’d come from a background where food was treated in the same way. She was born in Malaysia and her father contracted tuberculosis just before the Japanese invaded so they came back to England. But he died and the family was thrown into abject poverty. She’d been very well off and then very, very poor and I think when that’s happened to you food becomes an issue, because it’s about emotional stability.

It’s interesting to trace the role of food through the generations and also to see if certain families have a propensity towards obesity or not. My mother’s side of the family does and my father’s doesn’t. On my mother’s side her family came from Ireland and a whole load of them moved over to Singapore and of course that must have been around the time of the potato famine, so they would have been people who had known extreme hardship in terms of food.

I enjoy giving food to other people and other people enjoying what I’ve created. You need a lot of close friends when you’re in politics, people who are completely there for you when the shit hits the fan and something awful happens. I have a really supportive network of close friends and when they cook for me – something interesting or from their own garden – that’s really symbolic. It is a very visceral thing because it’s about showing affection and support.

My husband is vegetarian so when we met and started cooking together I stopped eating meat. I stopped being vegetarian when I was pregnant. My son’s vegetarian too but my daughter and I are not, but I don’t eat meat that often – maybe once a week.

I really like Middle Eastern food. I like rich flavors; chickpeas and aubergines, almonds, dates, figs, creamy sauces and I absolutely adore desserts. There’s an interesting conflict with desserts between fruit for instance, explosions of taste and you know you’re eating something really good for you, and then something like home made steamed syrup pudding with cream, something that’s really terrible for you but tastes amazing and you can just have a little of. What I like to do at a dinner party is have two sweets, one of each so you can have that blend and difference and move from the very intoxicatingly sweet taste to a sharp taste to clean your palette.

Never get between a woman and her chocolate! If I could only have one single item of food on a desert island it would have to be chocolate because of the amount of pleasure it gives. I let it dissolve on my tongue and in my mouth so I don’t need a whole bar, just a couple of pieces, and I let it dissolve to maximize the pleasure.

I’m Chair of the Environmental and Social Wellbeing Committee on the Bridport Town Council and we’re looking at a recession busting strategy. One of the things we’re trying to do is make the LETS system (Local Exchange Trading System), which is a bartering system that’s not geared towards profit, accessible to people on low incomes. So if they want to swap an hour’s decorating for a bag of potatoes, that are locally grown in someone’s garden or allotment, then they can do that. That’s one way of getting good quality food to people cheaply. We need to develop more ways of doing this.

Food is political in terms of the means of production, distribution and exchange. Supply chains offset the quest for cheap food for the consumer by exploiting the producer but making huge profits for the middleman – in the UK, the supermarkets. Food is political in terms of people’s self image and using it as a prop to cope with the difficulties of their lives. Really, it all comes down to power. The inter-relationships and the ties that bind us are never empty of the implications of power. I had a relationship with a man who used to say, ‘Ros, sometimes a cigar is just a cigar’. But a cigar is never just a cigar. Everything is political.”