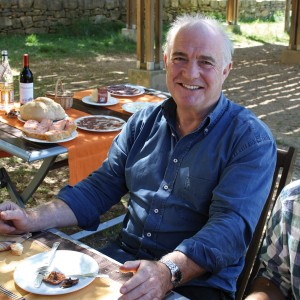 Rick Stein is horrified when I tell him that, according to the website Wikipedia, he now lives in Australia. “So that’s why people keep coming up to me in Padstow and saying ‘Oh, are you here for long?’” he exclaims. “That’s baloney, I live here!” For a brief moment I fear I may have inadvertently unleashed a powerful storm but instead he is the height of charm and warmth, and as I write this I see the Wikipedia piece has been changed to point out that, although he lives in Padstow for part of the year, he also has a house in Sydney as well as a restaurant in Mollymook, New South Wales.

He is currently roaming the countryside promoting his new book and television series, Rick Stein’s Spain. As powerful, hearty and rugged as the food it promotes, the book is a weighty hardback containing 140 new recipes. It was inspired by his journey off the beaten track of a country that first caught his imagination as an eight-year-old. He remembers how the poverty, the grey uniform of the Guardia Civil and the galloping statue of El Cid helped form a ‘slightly grim but romantic view of Spain’, that he simply couldn’t shake off.

I share those romantic and enduring memories, though sometimes tinged with a mixture of adventure and awe. Rick remembers first trying cuttlefish cooked in its own ink to show off to his parents on his first trip there, and being impressed that it didn’t really taste very fishy. My first taste of the famous inky stew came after a morning dodging rubber bullets in the old square in San Sebastian. As a rather naive young teen, I shared the dark, somewhat forbidding dish later that evening with a group of what I discovered many years later were ETA supporters – it was only a small relief to find that it wasn’t actually me that was the real target of those bullets.

However, if cuttlefish in its own ink conjures up memories of a darker Spain for me, Rick’s book is filled with the colour and warmth of the Spain that has kept millions of us coming back year after year. One of the things that inspired him to actually write the book was the fact that many friends, who were either Spanish or cooked Spanish food, produced dishes that were so much better than those he had often had in Spain. “So I thought it would be really good to do something like an off the beaten track trip through Spain,” he says. “And of course that works very well in television terms too. Funnily enough, one of the things that for a long time David Pritchard, the Director and I have been toying with, is the idea of going to somewhere like Benidorm or Torremolinos and pointing out that just a quarter of a mile from where I’m standing here, with all the sort of English breakfasts and pints of beer, you can get fabulous Spanish food.” He says the idea was born in Spain when he was filming in Magaluf in Majorca a few years ago. “We were going around asking all these poor British kids what they thought of the local food. And of course, their response was, ‘well we’re not here for the food, sorry’”.

Rick Stein’s Spain is a journey through the very different regions of a country that encompasses many influences: from Galicia with its Celtic feel and the evergreen Basque country in the north, through Rioja, Catalonia, Valencia and Andalucía. Not forgetting the huge expanses of central Spain where the sheer vastness of the country is often breathtaking. Few of the millions of visitors to the Mediterranean beaches over the years will have been aware of the diverse nature of a country that includes Galicians, Basques, Catalans and Castilians, all – in theory – under one flag. I was interested to hear Rick’s view of what, in culinary terms, holds it all together. “Well I think more than anything really it’s the ingredients that hold it together,” he says. “Because although in somewhere like Galicia or Cantabria the type of dishes are quite different from what you’d get in Andalucía, the fact is that they all use olive oil, they all use pimento, they always use tomatoes and lots of garlic; so there is a sort unity in the flavour of the food. It’s the dishes that are a bit different but the ingredients draw it together.”

That diversity of dishes could be said to mirror the character of the people: at times dark and moody with undercurrents of anger, whilst more often than not, warm, friendly and remarkably hospitable. On a recent trip to Cordoba, I visited Bodegas Campos to try their house speciality Rabo de Toro, a bull’s tail stew that they serve off the bone. It’s a remarkably dark and powerful dish which, when Rick ate it in Pamplona, he said must be ‘the butchest dish I have ever had’. He offers his own take on the recipe in the book, Oxtail and Red Wine Stew from Pamplona. Although it may be best eaten surrounded by photographs and prints of bulls and bullfighters and washed down with a glass or two of Navarra wine, there’s no reason why it shouldn’t make a hearty meal for an English winter.

Which is part of what makes Rick Stein’s Spain so palatable. Unlike many books with recipes from Spain, this is Rick’s own take on the foods he encountered, and although imbued with the character of the people, the climate and the countryside, it is still comfortingly very Rick Stein. Comforting too is his never-ending enthusiasm for his food. Pointing out that, foods such as Pimentón, Saffron, Jamón and Chorizo are important elements of Spanish cuisine, he says his latest enthusiasm is for Picada: a mixture of nuts, fried bread, garlic, olive oil and sometimes herbs that are pounded together and introduced to a dish at the end as a thickener. It is used to great effect in his recipe for Clams with a Garlic and Nut Picada.

The book also has a section devoted to Spanish desserts and Rick is quick to point out that, unlike the fare generally offered in most Spanish restaurants, the country offers fabulous dessert dishes that can be made at home. His theory is that puddings in Spain have developed a level of sophistication because of eight hundred years of Moorish rule, ‘the love of sweet, nutty and spicy mouthfuls is very apparent’. In the pretty Andalucian town of Nerja recently I tasted desserts that included delicious Malaga raisins bursting with flavour. Rick has included a recipe for Malaga Raisin Ice Cream with Pedro Ximenez Sherry that is rich, sweet and memorable. Powerful flavours that are a fitting end to one of the better cookbooks to be published this year.