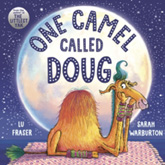 Doug is a camel, all alone in the desert and a little bit lonely with no one to play with. But along comes a camel named Brian and the two play on a see-saw, play leap frog, play hide and seek. Then along comes a camel named Claire, and another named Bruce and another named Rita. As each camel is added more games can be played until an entire camel herd arrives and a whole party ensues. Doug is having the time of his life with his new camel friends, but by the end of the day he is ‘all camelled out’ and it is time for him to go home and settle in for the night.
A delightful romp through the desert, with hilarious illustrations from Sarah Warburton, this is a counting book, a tale of friendship and a note that it is ok to be alone sometimes. It’s also a great bedtime story as the tale grows with exuberance and then winds down to a deep calm. With opportunities for little ones to engage with the text (rhyming prompts for the next number camel), lots of laughter and the time to snuggle down for a rest with Doug, this is one of my new favourite read-alouds. And the kids love it too!

Middle Grade
The Chime Seekers
By Ross Montgomery
Published by Walker Books
RRP £7.99
Suitable for readers aged 9 and up
Review by Antonia Squire

Yanni is struggling. Everything in his life has gone wrong since his parents brought home his new baby sister. The home he loved was deemed too small now she was here so they had to move away to the countryside. His amazing parents are too tired to pay attention to him since all his sister does is cry all the time. All he wants is for everything to go back to the way it was, but for that he needs his sister to disappear and that’s never going to happen. He doesn’t even want to think about it.
Then one night, the second night in his new home, his parents go out for dinner (for the first time since his sister was born) and his cousin Amy comes to the house to stay with him and help with the baby. Amy is his age and a bit of a nerd, always wanting to talk about her stupid games, and Yanni wants none of it. As he stomps upstairs to check on his sister he hears chimes and turns to see a tall man in the doorway. In the back of his mind Yanni knows something is deeply wrong, but the man is a faerie and casts a glamour over him. Somehow, Yanni isn’t sure how, the faerie gets Yanni to invite him into the room and then gets him to agree to let him take the baby. The faerie though, doesn’t leave an empty crib, he leaves a changeling in the place of Yanni’s sister. As soon as the faerie leaves Yanni is released from the glamour and realises what he has done. He chases downstairs to catch the faerie but tonight is Halloween, and the boundaries between the world of humans and the world of the Fae is thin. The faerie is gone and the changeling is walking across the ceiling. Amy and Yanni both know they need to do something and fast.
Fortunately, Amy is far more up on the world of the Fae, and with her trusty gaming guide the two of them cross the boundary in search of Yanni’s sister.
With three, seemingly impossible, tasks set by the evil faerie, and with the reluctant help of the denizens of the land of Fae, Yanni and Amy and the changeling set about their quest. By god this is good, Nicky and I both loved it.

Sam, who likes to be called S.G, is full of self-doubt and insecurity. There’s a party, everyone’s going, but S.G is so nervous that their inner turmoil is all consuming. The party is full of kids having fun, but S.G may as well be invisible, no one talks to them, no one notices they’re even there.
S.G sees another ghost across the room. They look like a sad ghost too, no one is talking to them either. Perhaps they’d like some company? The two sad ghosts share a common awkwardness and begin a beautiful journey to becoming kindred spirits.
Have you ever felt like you were invisible, and should have stayed in bed, hiding yourself from the world because no one understands you? The small things in life feel huge and molehills become mountains? Then maybe you should join The Sad Ghost Club and find your kindred spirits; “A safe space where anyone who is feeling sad or alone could feel… well… not so alone.”
Lize Meddings is an illustrator who is trying to raise positive awareness of how differently mental health affects us all. With this totally amazing new series of graphic novels/comics for teens, she has shone a light on feelings and anxieties that many of us feel daily. I feel that she knows me, and is speaking directly to me through her cute drawings and relatable characters. These books are full of hope and profundity and are truly heartwarming. The Sad Ghost Club is a real comfort blanket and I recommend it to everyone!