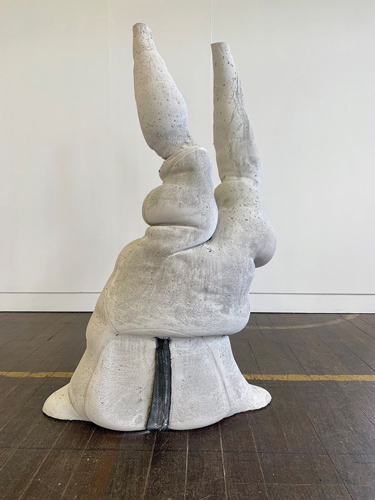 Driven to explore our relationship with environment and landscape Tania Kovats has travelled the globe working on incredible sculptural installations. She talked to Fergus Byrne about her love of sculpture and a career that nearly didn’t happen.

She is selecting sculpture for the 2019 Marshwood Arts Awards.

In an essay about the artist Tania Kovats, writer Philip Hoare describes her work as re-animating “the myths and realities of landscape in her imagination and ours.” He sees her “continually building and rebuilding it like a brick wall in her head.” It’s a description I’m reminded of as she talks about her motivation and the response to the environment which inspires her to create extraordinary sculptural pieces. The motivation is something she has never been able to pin down, but the response is constant. ‘I’m just very driven with what I do’ she says. ‘I just don’t think I could do anything else; it’s what I was made for.’ She describes it as like an engine that’s always on. ‘There’s always another work that needs to be made.’

The need to dissect, explore, investigate and interrogate the landscape, indeed the environment around her, is physical. She loves the tactile nature of sculpture. Her current exhibition ‘Divers’ at Berwick Visual Arts in Berwick-upon-Tweed involved filling wetsuits with concrete, and after setting, peeling off the rubber remains of the suits. The result is extraordinary, but she recalls the process as a ‘real wrestle’, although conversely, she also found it ‘a deeply erotic experience’. Despite casting in concrete, her current material of interest is water, and the ‘Divers’ are inverted as if they are diving through the floor—a probe ‘testing human limits’.

Moving to live by a mill in Devon has had an influence on her work. She began to concentrate on water as her source of inspiration and material. She visited the Arctic which had a ‘massive impact’ helping her to see how places she had visited previously—jungle and desert—interconnected with the Arctic and with each other. ‘Water is the connecting element’ she says, realising that all the landscape works she had done before were made by water. ‘Water is the sculptor.’ From glaciers making valleys to rivers making a gorge, she sees water as a ‘dynamic force’.

Water might be a fitting symbol of the ebb and flow of her creative journey to date. Her deep affinity with sculpture got off to a shaky start at the Royal College of Art where she felt ‘the place was sort of haunted by people chiselling on stone and macho bronze casting.’ She knew that wasn’t what she wanted and battled with the traditional interpretation of the word ‘sculpture’. However, a spell in Rome on a scholarship changed her view. Spending time immersed in the relationship between sculpture and architecture, the city and the body helped her realise she didn’t have to be scared of ‘the S word’ anymore. ‘It is who I am, it is what I do’ she says. ‘Sculpture is the most incredible thing ever.’

But things might have been very different. Told by a tutor at the Royal College of Art that she probably wouldn’t have an exhibition until she was in her forties and more likely would give up, get married and have children, was a shocking and potentially deflating experience. However, she dispatched that prophesy to its rightful place by winning the Barclays Young Artist Award in 1991. She remembers attending the opening night at the Serpentine Gallery where she was the only woman exhibiting alongside people like Peter Doig and Douglas Gordon. Each selected artist was given a cheque, and she recalls feeling ‘cross’ when all the names were read out, and hers wasn’t. Deflated and angry, her mood suddenly changed on hearing that there was one more announcement—the overall winner was Tania Kovats. ‘I was so excited’ she recalls.

It was one of the turning points in her career. One that helped her to understand the need to become visible and the value of initiatives like Arts Awards. ‘You have to seek it out’ she says of success and recognition. ‘Becoming visible is so important. They call it an artwork and some of that work happens in the studio with just you and the object, but so much of it happens beyond that. Engaging with the world, being present, making the work present, that’s all part of the artwork.’ She agrees that for many artists being brave and promoting their work can be an uncomfortable experience but explains: ‘You have to balance that introverted process with putting yourself out there.’

Tania Kovats ran the MA Drawing at University of the Arts London until 2018 when she was appointed Professor of Drawing at Bath Spa University. She has work in collections including Arts Council Collection, UK, the British Council Collection, the Contemporary Arts Society, London and the Victoria & Albert Museum and is represented by the Pippy Houldsworth Gallery, London.

Tania will be choosing sculptors to exhibit alongside her at the Marshwood Arts Awards 2019 in November. For information or to submit work for consideration visit www.marshwoodawards.com