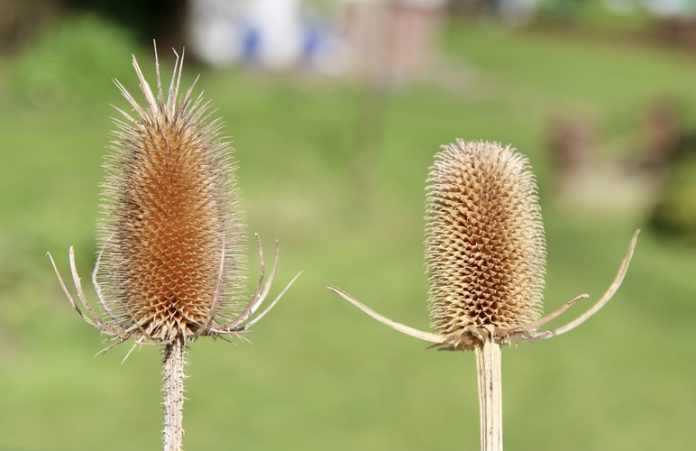 The sight of a wild teasel (Dipsacus fullonum, also called D. sylvestris) that grows typically on the verge of a road is unlikely to excite one’s interest. Aside from its beige colouring, its defensive, prickly exterior, and being the favourite foodstuff of the European goldfinch, there is little else of note. By comparison, its cultivated counterpart, the true ‘Fuller’s Teasel’ (Dipsacus sativus), played an integral role in the British woollen industry and continued to be commercially farmed in South Somerset until the 1970s. The Fuller’s teasel was used in the processing of woollen cloth; the densely compacted heads with hook-like bracts assisted in the process of napping – also referred to as raising. At this stage, about a dozen or more teasels would be inserted into a handheld frame which would brush the cloth to tease out the loose fibres in a process known as ‘raising the nap’. Still, there exists a degree of muddle and confusion around the Fuller’s teasel, for its name – Fuller’s – remains a misnomer. The process of fulling, in which the natural oils of the wool would be cleansed, dirt removed, and the cloth felted, occurred before the napping stage. Additionally, the West Country name for a fuller was a tucker, and the spelling of teasel can be interchanged with teazle or teazel.
Producing cloth originally began as a cottage industry. In the rolling countryside of Wiltshire, the Cotswolds, Somerset, and Devon, small-scale spinning and weaving occurred, often alongside the day-to-day farming of sheep. Between the seventeenth and nineteenth centuries, industrialisation and commercialisation of the cloth trade revolutionised the landscape. River towns such as Frome and Tiverton constructed fulling mills and factories for spinning and weaving, while ports including Lyme Regis and Exeter profited from woollen exports. Clothiers and craftspeople proliferated as the mills displaced and attracted rural talent. Gradually, the mills and workshops overtook the cottage industry. Importantly, a constant feature throughout these systemic changes remained the Fuller’s teasel. This is evident with the Incorporation of Weavers, Fullers and Shearmen. Based at Tuckers Hall in Exeter, this historic guild was granted a Royal Charter by King James I in 1620 to effectively regulate the region’s woollen cloth trade. Its ornate wooden interior still carries traces of the Fuller’s teasel; intricate representations adorn the oak panelling and guild’s coat of arms. One can imagine a once-bustling Tuckers Hall as tradespeople congregated to discuss matters concerning their daily business.
At one time many fields north of Ilminster towards Fivehead and Curry Rivel and east towards Beercrocombe, Curry Mallet and the Blackdown Hills were known for cultivating the Fuller’s teasel. Countless fields would have been dedicated to the biennial crop, with hundreds of six- and seven-foot-tall plants swaying in the wind, yielding thousands of teasel heads for the cloth trade. This would also have been the case in certain pockets of East Anglia. Nevertheless, the cultivation process was time-consuming and arduous. The seed was sown in around May and the young plants would be transplanted into a freshly ploughed field around six months later to flower and produce the teasel heads in the following summer. It would require regular hoeing and maintenance. Harvesting the teasel heads also required specialist equipment, including a small crescent-shaped knife created by the local blacksmith that would be tied to a leather gauntlet. An experienced cutter could harvest up to 10,000 teasel heads a day, which were then dried and stored as bundles. In the more recent past, the main intended destination for Somerset’s Fuller’s teasels was the northern manufacturing county of Yorkshire.
In the early 1970s, amateur historian R. A. McMillan travelled from Yorkshire to document the continued production of the Fuller’s teasel in Somerset. His findings remained unpublished until the release of his book in 2012, titled Teazles and Teazle Men. Based near Ashill, the Brunt family were the last known commercial farmers of the Fuller’s teasel in the area. Admittedly, by the 1970s, the commercial viability of teasel farming had reduced; rather than dedicate acres to the Fuller’s teasel, it was grown in odd patches of land alongside larger areas for grain and livestock. Furthermore, in World War Two, the family also sold some of the collected seed as food for birds. McMillan’s monochrome photographs capture the family at work during this late stage of teasel cultivation and harvesting.
Demand for the teasels eventually declined once new industrial processes replaced the teasel’s sensitive hook-like bracts with manufactured steel alternatives. These contemporary alternatives are not as effective as they can cause tears in the cloth, but they are more time-efficient. For specialist undertakings, such as the production of emerald billiard cloth and the Pope’s vestments, the Fuller’s teasel still prevails as the best tool for the job. These teasels tend to be imported from abroad as opposed to grown in Britain. Therefore, as the farming of the Fuller’s teasel practically evaporated, so too did any trace from the landscape and the local consciousness. Fortunately, with McMillan’s book and the continued operation of Tuckers Hall, detailed information exists to reveal the small but important, local role individuals and the Fuller’s teasel played in Britain’s woollen industry.

My many thanks to Paul Pickering for imparting just one part of his extensive local knowledge and for lending me a copy of Teazles and Teazle Men.