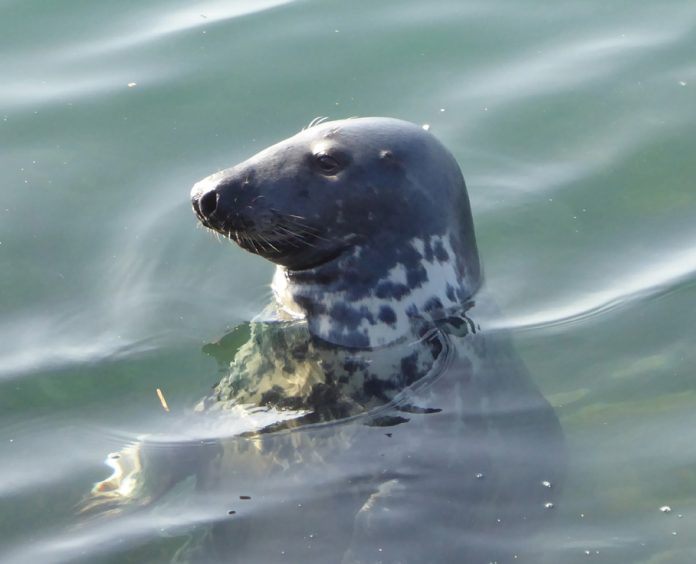 A glistening black head suddenly broke through the surface of the water a metre or two offshore. A long, dark, shadowy shape was also just visible and we realised that this was a seal. We watched, captivated, as it swam slowly south westwards, staying roughly parallel to the beach, leaving a trail of ripples in its wake. Along the beach, people were swimming and when they saw the seal coming, they quickly made their way to dry land but the seal had already disappeared.
This magical encounter occurred last year as we were walking along a shingle beach in south Devon, but chance sightings of seals can occur almost anywhere along the Dorset and Devon coasts and are unpredictable and surprising. Each observation, though, is a reminder that these fascinating creatures live alongside us, and gives an insight, however brief, into their lives.
Seals are the largest land-breeding marine mammals found in the UK and two species may be seen around our coasts, the grey seal and the common or harbour seal. The grey seal is the larger of the two with males up to 2.6 metres in length and 300kg in weight. The grey seal is one of the rarest species of seal globally and the UK has more than a third of the world’s population, mostly found around the west coast of Scotland, also the Orkneys and the Shetlands with a few significant colonies along the East coast of England. Common seals are smaller, with males up to 2 metres in length and 150 kg in weight. Numerically, UK waters contain fewer common seals but the population is still significant amounting to 30% of the European sub species. Common seals have a similar UK distribution to that of the grey seal.
Should you sight a seal, it can be tricky to decide which species but if you can see the head, that may help. Common seals have relatively smaller heads compared to body size with a clearly defined forehead and short snout. Grey seals have larger heads with longer flat noses and no forehead. Fur colour is deceptive as both species vary in colour from grey to pale brown and whether the animal is wet or dry. Fur patterns, though, may help identification with grey seals having irregular darker blotches and common seals being more uniformly spotted.
Seals spend their lives partly on land and partly in the water. They haul out, often in groups, on uninhabited rocky islands, secluded beaches and sandbanks to rest, to digest their food or to give birth. More than half of their time, though, is spent in the water feeding and they can travel long distances to forage. They are superb swimmers, capable of diving to a depth of up to 100 metres to find food on the sea bed and during a dive they slow their heart rate in order to conserve oxygen. On land, seals can appear ponderous and ungainly, dragging themselves about using their front flippers, but once in the water they swim with grace, elegance and speed. This ability to slip effortlessly between two distinct lives, one on land and the other in the water, seen and largely unseen, gives seals an aura of mystery. It is no surprise that a wealth of myth and story has attached itself to the creatures.
Because the majority of seals in the UK are found along northern and north western coasts, sightings as far south as Dorset and Devon are infrequent but of great interest. There are no regular haul out sites along the Dorset and east Devon coasts so sightings are usually of seals moving about. Most of these casual sightings are of grey seals although there are thought to be a few common seals resident in Poole Harbour. The picture changes as we move into south Devon where several regular haul out sites are found along the coast. Here grey seals gather in small numbers at low tide to rest although they can also be seen swimming nearby. Seals are also seen in the Exe and Dart estuaries sometimes a distance from the coast.
The Dorset Wildlife Trust Fine Foundation Wild Seas Centre at Kimmeridge is trying to build up a catalogue of seal sightings. Individual seals have characteristic marking patterns on their fur, so that photos can be used, rather like a fingerprint, to identify seals seen regularly in Dorset or moving about along the coast. By sharing their findings with other seal recorders, they already know that some seals seen along the Dorset coast have also been spotted in Hampshire, south Devon, Cornwall or France. Should you see a seal, you can help this project by reporting your sighting (with photographs if available, see below for details).
There is increasing concern, however, that seals are being disturbed by encounters with humans. They are large wild animals and, although they are curious creatures, they can be easily upset and disturbed. Seals haul out to rest and digest food and this essential quiet time can be interrupted if humans get too close. Disturbed seals may even panic, jumping from rocks into the sea so risking injuring themselves. There are also sporadic reports of humans being bitten when trying to feed or pat seals. Feeding seals additionally risks disturbing their natural feeding patterns.
The Dorset Wildlife Trust has compiled a code of conduct to try to deal with these problems. This code should be followed at all times when encountering seals or taking photographs, to protect both seals and humans and to minimise disturbance of these wild creatures:

Keep well away from seals so that they can’t see, hear or smell you
Use a camera zoom or binoculars for a better view
Keep dogs on a lead if seals are known to be in the area
Never feed seals
Take all litter home
Do not seek out encounters with seals in the water

Seals are iconic wild creatures and we are privileged to be able to see them along our coasts. We must, however, treat them with respect. They have their own lives, very different from ours, and they have as much right to occupy the environment as we do. We should enjoy watching these beautiful creatures but make sure that they can live their lives undisturbed.

I should like to thank Sarah Hodgson of the Dorset Wildlife Trust for her generous help and guidance when I was preparing this article
All photos shown here were taken using a zoom lens.
To report seal sightings in Dorset, use this link: http://seals.dorsetwildlifetrust.net/, seal sightings elsewhere in the south west can be reported by emailing: sightings@cornwallsealgroup.co.uk