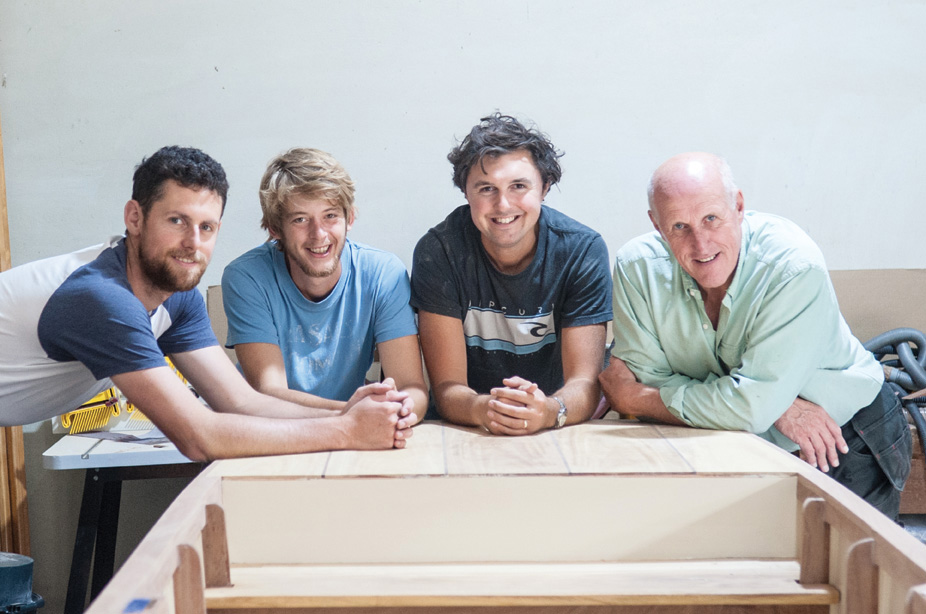 Margery Hookings is invited along to the launch of a very special boat at Hestercombe House and Gardens, near Taunton, where she meets the West Dorset team who created it.

The punt glides through the calm water of a lake deep in the Somerset countryside.
There’s a television camera focused on the punt and the men who made her. All is going swimmingly. Which is just as well, because it’s a bit of a first for The Beautiful Boat Company, which was formed in March 2018 by four men who met while studying at The Boat Building Academy in Lyme Regis.
They’ve been asked to recreate an Edwardian punt for the pear-shaped lake at Hestercombe, using photographs from the 1900s as their template. They’ve fashioned the vessel out of floorboards salvaged from the old East Reach Hospital in Taunton. The wood includes iroko, sapele and teak and was reclaimed by Hestercombe Gardens Trust chief executive Philip White from East Reach Hospital in Taunton, where the Portman ward was sponsored by the house’s last private owners.
There is quite a gathering here on the side of the lake. A lady in Edwardian dress, complete with flouncy hat and cocker spaniel, is on board, with Beautiful Boat Company director Sam Smith playing the part of Mr Miller, who, in the old photographs, was the punter. They are accompanied by fellow directors Sam Shepherd and Jamie Chitty, while the fourth member of the team, Simon Olszowski, stays on dry land to be interviewed by a reporter from ITV.
Run by a charitable trust, Hestercombe is undergoing a continual process of restoration, maintenance and development of the gardens, which span three centuries of garden history and design.
After the speeches, the boat is officially launched and given the name of Constance, in honour of the lady of the house who lived at Hestercombe for 60 years. It is Constance Portman who is being portrayed in period costume on the punt.
“It’s just as well the naming of the boat didn’t go out to public vote,” Mr White says. “Otherwise it could have been called ‘Punty McPuntface’.
The punt flows across the lake as it if were made for this day, which indeed it was. Gazing across Pear Pond, with the house and the hills in the distance, the scene could be straight from Edwardian England, which is very much the point.
The painstaking process of returning a punt to the lake began when Philip White discovered six photographs of a punt from about 1904.
As he explains: “I asked a boatbuilder about these photographs some years ago who said it was an unusual punt; shorter and deeper than most estate or lake punts and finely built in the Thames tradition. Ever since I have wanted to see a punt back on the Pear Pond as we suspect the one in the photographs was sold at the estate sale in 1951.”
Few visitors will know that Hestercombe has the remains of a boathouse on another, currently unrestored, lake, which suggests there may originally have been two punts on the estate. The boathouse provided crucial evidence about the length of the punt and suggested that it had a maximum length of about 18 feet. Armed with this information and his passion to see a boat afloat again at Hestercombe, a chance meeting between Philip and The Beautiful Boat Company’s Simon Olszowski led to the punt commission.
Says Sam Smith: “We were thrilled to be shown these intriguing photographs, and be asked if we could start from scratch, piecing together as much information as possible about design from historic plans, drawings and photographs. We then worked with Philip to agree specification and hull colour and set to work sourcing beautiful wood for the boat’s interior and trim. We used a mix of modern and traditional skills to create a punt in keeping with its heritage and with a traditional look and feel.”
He describes the whole process as a ‘joy’.
“We thought it was lovely to bring back some wood with a historic link to Hestercombe, and we have also enjoyed replicating the pole, oars and a paddle, all of which are clearly visible in the original photographs.”
The team also worked with a foundry to recreate the very unusual square rowlocks visible in the original pictures.
Says Philip White: “We’re delighted to be bringing back the Hestercombe punt, after 110 years. We hope it will allow the gardens to be seen from a different perspective, as those in the 18th century would have been able to enjoy it. This offers a new and exciting way to view Hestercombe’s unique landscape.”