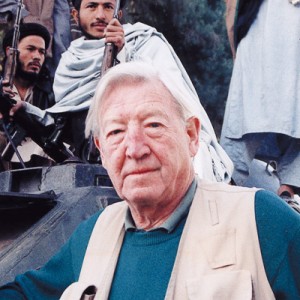 Veteran news reporter and broadcaster Sandy Gall has been reporting on Afghanistan for more than thirty years. He talked to Fergus Byrne about the current state of the conflict.

In a 2004 documentary on Afghanistan, Sandy Gall described the country as a place of staggering beauty and remarkable people. He also pointed out that the story of its history is that of ‘repeated invasions, heroic resistance and countless wars’.  A story, he said, that had come to dominate his life since he first reported on the country in the early 80s. In the documentary that resulted from that first visit in 1982, he is seen trekking through the mountains with the Mujahedeen and the ‘Lion of Panjshir’, Ahmad Shah Massoud, one of the leaders of the resistance against the Soviet occupation who was assassinated just before the 9/11 attacks in the United States. Crossing rivers and negotiating dramatic yet inhospitable terrain, Gall trekked for twelve days through the mountains dodging air and ground attack from Russian troops. Next month he visits Beaminster to talk about his latest book War against the Taliban: Why it all went wrong in Afghanistan.

The book centres on the main themes that currently impact the country, its people and their hopes for peace and security. What becomes clear is that Afghanistan, although suffering invasion from the days of Alexander the Great and Genghis Khan, is not really much better off now than it was when US and allied forces took the post 9/11 war on terror to the Taliban on their home soil. War against the Taliban draws on the results of dozens of interviews with politicians, diplomats, military and civilians from the many sides of the current conflict, to add flesh to the bones of the theory that enormous mistakes have been, and continue to be made there. And like many before him, the veteran broadcaster and journalist shows his frustration at the many things he sees as key to the state of Afghanistan today.

First and foremost is the fact that America, having ousted the Taliban, then took their eye off the ball to invade Iraq, thus allowing the Taliban to regroup—a situation that could easily be seen as having caused countless loss of life since. Speaking of the months after the initial Afghanistan campaign Sandy Gall told me: “The Americans just said that’s that, we’ve got rid of Al Qaida, but of course they hadn’t got rid of Al Qaida.” He pointed out that because Iraq then dominated American thinking “they failed miserably in Tora Bora” in the disastrous effort to capture or eliminate Osama bin Laden—an operation that saw up to 800 Al Qaida escape overnight across the border to Pakistan.

But if the Iraq war had, as he says, “a really terrible effect on Afghanistan”, Pakistan, or its security force the ISI, is seen as the oil that keeps the Taliban and other insurgent groups fuelled for battle. Much as it has been denied by Pakistani officials, the theory that American tax dollars—given as aid to Pakistan to help its economy and its assistance with the war on terror—are in fact being fed to Al Qaida and the Taliban to kill allied soldiers, carries much more weight, and it is one of the greatest challenges facing the allies today. However, Sandy Gall doesn’t believe much will be done to deal with that until after the US elections in November. Speaking of what he sees as Pakistan’s complete duplicity he says “In Hollywood terms, it’s a complete double-cross.” Pointing out the comments of one ex-ambassador to Afghanistan, who said the Americans could put Pakistan and the ISI on the terrorist list he said: “There’s an impasse in which I think Obama, because of the upcoming election, is not prepared to take that sort of strong action.”
Inevitably there are other considerations in the ebb and flow of diplomacy. Not only is Pakistan’s control of the border routes into Afghanistan important to sustain supplies to NATO troops, but it will also be a vital route out when those same troops need to take out the millions of dollars of equipment and hardware that has been amassed over the last decade. The route has been closed for the last six months because of a row over a US airstrike that killed 24 Pakistani troops, and though a more expensive route has been used since then, it remains an important card for Pakistan to play in its negotiations with the US.

Although there are many who feel the withdrawal of troops by 2014 will only lead to another civil war, I asked whether an Afghan army, supported by ‘non-combatant’ troops and US drone attacks would be enough to contain the Taliban and allow an Afghan government to stabilise the country. The answer, of course, is what ex-US Secretary of Defence Donald Rumsfeld might call a ‘known unknown’. “Some Americans, some of the senior Americans, are optimistic,” he says, but “rather a lot of other people are pessimistic. I think the Taliban have got so many tentacles and so on throughout the country that you can’t drone them all.” For many Afghan citizens, the prospect of a computer-operated war from a base in California will not win hearts and minds.

But there is a third theme that raises its head throughout War with the Taliban: that of corruption. Pointing out that ‘corruption lies at the heart of present-day Afghan politics’ Sandy Gall says that, prior to the assassination of Ahmed Wali Karzai, younger half-brother to President Karzai, he was said to be seen as the President’s political enforcer and his personal representative in the drug-rich south. He mentions how American journalist Gretchen Peters highlighted one report on drug-related corruption within the Karzai administration that suggested a complex system of kickbacks. UN researchers had estimated that officials who won ‘plum assignments’ stood to earn enormous amounts of money in bribes. Like a multi-level marketing system bribes are fed up the chain of command in varying degrees. One researcher suggested that top police officials had to pay as much as $40,000 (£25,000) a month in bribes just to keep their jobs. An Afghan architect interviewed described the Afghan government as an ‘exact replica of the Mafia’. I asked Sandy Gall whether he felt it really is that bad. He said: “Yes it is, I think Karzai is—you know he’s the Godfather”. Although he says they obviously wouldn’t admit to that description he points out that “huge amounts of money are involved, a lot of it comes with the drug business, inevitably, and so I think all aspects are a great problem, and the Americans don’t seem to be able to stop it; they keep saying to Karzai you’ve got to reform and nothing happens.”

However, the accusation of corruption can’t be targeted at the Afghan administration alone—in fact, it is how they have done business for hundreds of years—there are other foreign interests that have done well out of the billions of dollars of aid pumped into Afghanistan since the war began. The corruption and diversion of aid is an intractable circle that is highlighted by Dr Ashraf Ghani, an academic and one-time advisor to President Karzai. He says that the chain of corruption in international contracting is ‘hair-raising’, citing an example of a $125 million contract to build a new road. Initially granted to an American company, that company then subcontracted to a firm from a regional country for $80 million, making a profit of $45 million. What makes the whole scenario even more ridiculous is the fact that the company building the road will have had to negotiate with either local Taliban commanders or narcotics family warlords for security of transport to complete the job. The negotiated fee again likely used to help arm those fighting NATO forces.

After more than thirty years reporting on Afghanistan Sandy Gall’s knowledge and contacts put him in a position to know more than most. In War with the Taliban: why it all went wrong in Afghanistan he uses interviews and observations from many of those on the ground in that country to paint a realistic picture of a war that is very much unfinished. Although written from the stance of a professional reporting journalist, dealing in fact and anecdotes, there are moments when his emotion for a country that he has shared history with comes to the surface. One feels he has an awful lot more to say.