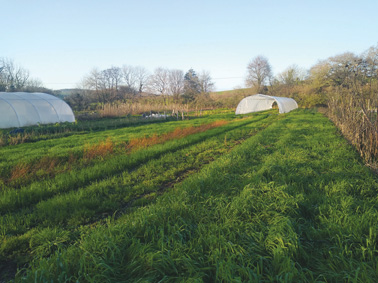 We have been lucky with the weather during January—with some beautiful cold, crisp, blue skied conditions that make growing vegetables an absolute pleasure during the winter. I often find the idea of winter vegetable growing as quite daunting—trying to get around the garden with clay soil sticking to my boots, picking salad leaves that have been frozen in the polytunnels, stressing about whether it will ever be dry enough to plant spring crops – that sort of thing. However, there is nothing better than working in the market garden during the winter when it’s not too wet. We don’t have the pressure that we experience in the summer, we can take things more slowly, reflect on the year gone by and get excited about the year ahead. By February, the days are now getting longer, the birds are busier and there is the hope and promise of spring on the horizon. We start sowing summer polytunnel crops by the end of February (we used to sow tomatoes in the middle of February, but we have found it makes very little difference to production if we sow them a few weeks later—the beginning of March is usually good). Sowing seed brings so much hope, so when we begin again this month it brings another lift to this time of year. Most sowing can wait until March if you do not have any polytunnel or glasshouse space, but we have a lot of polytunnels and want to make the most out of this space by growing lots of early sown crops as well as the main summer crops like tomatoes and peppers.
Something new that we will be focusing on this year is lots of undersowings of autumn crops with green manures. This is something we tried a bit last year, and we have learnt lots from it and have seen great benefits of having beds and paths covered with plants, and the roots of these stabilising the soil and providing a continual source of food for soil life. The improvement to drainage is massive. Our field is heavy clay and difficult to deal with in the winter. The rain puddles in pathways and drains really slowly, however, with green manures rooting into pathways, or with woodchip paths (which we do on one area of the garden), the water drains so much quicker, allowing us to walk along the paths without causing as much smearing/compaction which would lead to further drainage problems. We sowed a mix of black oats, phacelia and linseed throughout August, either straight over crops that were growing in the beds, but would be finished by late autumn—like lettuce, herbs, fennel and chicory or we would clear summer crops like courgettes and early beets by the end of august or early September and then sow the same mix into bare soil. With the oversowing, we found that after spreading the seed onto the soil (just by broadcasting it by hand) we would hoe around the crops and this would bury the seed lightly, this would then germinate in the warmth of the late summer/early autumn soil and put on a lot of growth before winter. This winter it continued to slowly grow and some of it was over a foot tall by the end of last year, as it was such a mild late autumn/early winter. We have been strimming or flail mowing these green manures on beds that we will be planting up during March and early April. We have then covered these beds with black plastic to kill of these green manures as well as any weeds and crop residue. We will pull the plastic off a few days before we plant the beds and rake them out, they are then ready for planting. For beds that we do not need to plant up until mid April or later we will mow or strim at the beginning of March and do the same. By March, the soil will be a little warmer and soil life will start to be more active and so the green manures will break down quicker than through January and February. Leaving these living plants in the soil for as long as possible will maintain the best conditions for soil life, which will then thrive and benefit the next crop, and improve the soil for future plantings.
These techniques are at the heart of organic vegetable growing, and the longer we grow veg, the more we understand about our soils, and more we see the benefits of really focusing on systems that work to build good soil health.
WHAT TO SOW THIS MONTH: If you have a heated propagator in a naturally well lit place: peppers, tomatoes, lettuce, beetroot, shallots, spring onions, spring cabbage, salad leaves (see above). If you do not have a heated propagator, best leave sowing until March.
WHAT TO PLANT THIS MONTH:
OUTSIDE: Wait until next month!
INSIDE: Most of the indoor space should have been planted up with overwintering leaves, herbs, and early crops like spring onions, early garlic and peas.
OTHER IMPORTANT TASKS THIS MONTH: If the weather dries, continue preparing beds for the spring by mulching with a little compost and covering with black plastic if you are planning on planting them in Spring. Wash any polytunnel or glasshouse to make sure maximum levels of light are getting through to the crops. Try to finish off any “winter jobs” this month before sowing, bed preparation, planting and weeding begins to take over!