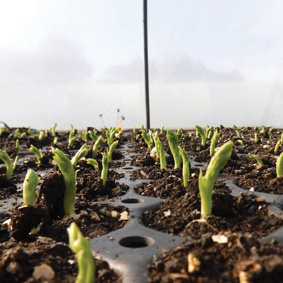 And sow it begins!
March marks the beginning of Spring, and for gardeners and growers this means the onslaught of seed sowing. This is such an exciting time and a relief after getting through winter which can sometimes be challenging for gardeners and growers (although it can also be one of the greatest times too). A grower friend calls the feeling she gets at this time of year “Spring disbelief”. After having gone through the depths of winter when it feels like nothing is growing, you get to Spring and cannot believe how incredible it is when you see seeds germinating again. I still get the same sense of excitement and hope when we start seed sowing in the Spring—it is such a special time as a grower to see all of the potential from the seeds that you have sown starting to emerge. It is even more special when you sow seeds that you have saved yourself too.
We sow a huge number of crops through March, and have done a few early sowings in February too—mainly for early crops in the tunnels, but if you are on fairly freely draining soil they could be planted outside too, with a covering of fleece to protect them from the Spring frosts and wind. Most of the crops that we grow are started off in module or cell trays. We fill the trays up with compost (peat free) and firm the compost down. We then have a simple tool that dibs holes into the compost for us to place the seeds into (it is effectively a board with dowels coming out of it that are spaced apart the same distance as the cells of the tray and you can just push it down onto the compost and it makes a little indent in the compost. You can just use your fingers, but this just speeds it up for when we are doing thousands of seeds at a time!). Depending on the crops we sow between one and 10 seeds in each cell. For lettuce, endive, chicory, cabbages, kale and other crops that we only want one plant at each planting space we just sow one seed per cell. Leafy crops for cooking or for salad like chard, spinach, all the salad leaves (other than those mentioned above), beetroot, turnips, shallots, herbs like coriander, parsley, basil all get sown at about 3-5 seeds per cell. We sow around 10 seeds per cell of spring onions—effectively aiming for a bunch. These multi-sown cells are not thinned out at all—they are planted out as they are, so you end up with 3-5 plants in a clump (or 10 in the case of spring onions) and if planted at good spacings they develop well like this. Most of the crops mentioned above we plant out at around 20 x 20 cm or 30 x 30 cm in the case of chard and kale, and winter cabbages need to be more like 50 x 50 cm. Spacing is fairly critical for planting vegetables—as it will often determine the size of the vegetable, but will also allow enough space for plenty of good airflow between the plants, minimising the chance of fungal diseases, whilst being close enough together to crowd out the weeds.
Once we have sown the seeds into the cell trays we cover the seeds with a sprinkling of vermiculite which helps to maintain more consistent temperature and moisture around the seeds. We then soak the cell trays in trays of water (allowing the compost to soak up the water from the bottom rather than watering from the top which can wash away the seeds and can be more difficult to ensure a consistent level of moisture). Once soaked we put the trays on the propagating bench and cover them with a sheet of polystyrene to maintain consistent temperature and moisture. They won’t need another water until after the seeds have germinated. The propagation bench has a layer of insulation on the top, then ontop of that a waterproof membrane, then about 2-3 inches of sharp sand on top of which we lay a soil warming cable, and then cover this with another 2-3 inches of sharp sand. The cable is linked to a thermostat so that we can set the temperature—generally around 18 degrees for most crops and around 23-25 for tomatoes, chillies, peppers and aubergines. We check underneath the sheets of polystyrene daily to see if the seeds are starting to germinate and at the first sign of germination we remove the polystyrene. The trays then get taken off the hot benches and placed on unheated benches, covering them with fleece through the Spring until they are ready to plant out.
Happy sowing, and don’t forget to plan in successions of crops—you don’t have to sow everything in the Spring!!

WHAT TO PLANT THIS MONTH:
OUTSIDE: salads—mustards, rockets etc., lettuce, peas, broad beans, potatoes, early kale.
INSIDE: If you sowed any early salad crops for a polytunnel or glasshouse they can go in at the beginning of March. Also successions of peas and spring onions will continue to be planted.

OTHER IMPORTANT TASKS THIS MONTH: If the weather dries, continue preparing beds for the spring by mulching with compost. Keep on top of the seed sowing, but don’t sow too much of anything – think about sowing successionally rather than doing one big sowing in early Spring. Things that are perfectly suited to successions include all salad leaves, spring onions, peas, beans, beetroot, chard, kale, carrots, fennel, radish and annual herbs.