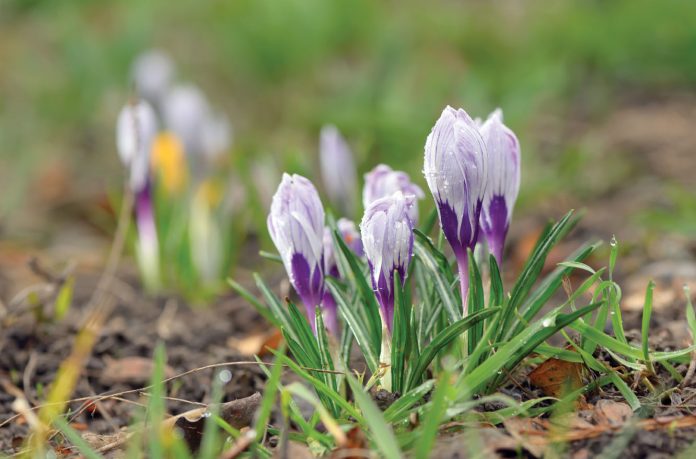 There is a danger that what I write to cover gardening tasks this month won’t be any different to what I suggested last month—that’s ‘the nature of the beast’ when it comes to getting on with gardening during the winter months.
Traditionally, February is cited as the month when you risk life and limb, clambering up a ladder, to shorten all the flowering shoots of wisteria back to just a few buds. Like rose pruning, I can’t really see why this task cannot be tackled at any point during the winter when the plant is leafless and dormant. There is a slight risk that if you do it too early, in a lethally cold winter, then the pruned stems may die back even further and you lose all the flowering buds. Doing it too late only defeats the object of doing it at all; namely that the plant will have already expended energy on every flower bud and culling the extra ones too late wastes those resources.
I mentioned snowdrops last month because they are generally the first of the spring bulbs to pop up. This month the palette of early flowering bulbs expands greatly and includes Crocus tommasinianus which can begin flowering in January, when naturalised, in short grass, on a south facing aspect, but which will be in full force by February. Similarly early are Iris histrioides (various named varieties and selections) and winter aconites (Eranthis hyemalis), although I find the latter to be more difficult to establish as they prefer ‘woodland floor’ conditions rather than ‘standard’ garden soil.
An often overlooked bulb, perhaps because it has slightly rank foliage, is Ipheion uniflorum. This is one of those slight oddities that produces leaves as soon as the summer is over, with cool, wet, conditions following the warm, dry, summer months, and which then sends up occasional flowers from that point on. In a sheltered spot, such as in pots against a sunny wall, it can flower all winter but, more typically, it will produce the majority of its blooms in February and March.
Similarly overlooked are the squills (mostly Scilla species but formerly Chionodoxa and, confusingly, the hybrid x Chionoscilla !). I have a soft-spot for these cheerful little chaps which look best in large drifts and which will happily seed around to pop up all over the place if allowed. Grape hyacinths (Muscari species with multiple synonyms) tend to be slightly frowned upon in polite gardens because they are a little too ‘easy’ and a little too keen to seed around. As with any, pleasingly promiscuous, self-seeder, they are not difficult to weed out where their presence is not required and, like squills, they are relatively diminutive.
Early daffodils, Narcissus species and varieties, are also usefully diminutive and, unlike the later, more robust types, appear, flower and disappear again without too much fuss. Named varieties like ‘February Gold’, ‘Tête-à-tête’, ‘Jack Snipe’ and ‘Jetfire’ are suited to beds and borders while their species ancestors, such as Narcissus lobularis and Narcissus pseudonarcissus, are more suited to naturalising, in as large a drift as you can afford, in lawns and meadows.
With all these spring bulbs emerging there is a certain urgency to mulching any beds which haven’t yet had this done. With a move towards a more ‘new perennial’ style of gardening, where a greater proportion of herbaceous perennials have stems with winter interest, borders are no longer cut down to bare earth in the autumn and left naked all winter. This makes the timing of when to add a mulch, a humus rich covering of something like garden compost or well-rotted manure, a bit tricky. Herbaceous perennials will soon be back into growth so cutting down their last remnants and mulching now is a good compromise. It’s not good practise to trample all over flowerbeds if they are very wet, or the ground is frozen, so, as with so much when it comes to gardening, the weather will probably dictate when you actually manage to get the job done.
One of the best reasons for leaving mulching until just before the herbaceous perennials start back into growth is that it means that you can also fork in a sprinkling of ‘fish, blood and bone’ (my favoured organic fertiliser) and weed out any unwanted imposters while you go along. You can’t add nitrogenous fertilisers in the autumn, or the depths of winter, because the winter rains will wash away any goodness before your border plants become active enough to make use of the added nutrients. A few inches of weed-free, organic, mulch on top of the prepared soil will lock in soil moisture, during the growing season, and help to suppress weed growth into the bargain. Other tasks will become apparent, as you add the mulch, and that’s why it’s a pleasing job to be doing at this time of year. I tend to prune the roses as I go along and clear the underskirts of any shrubby specimens which are threatening to shade out their herbaceous bedfellows.
Getting a head start with a few propagating tasks, under cover, is always a good idea. Slow growing annuals can be sown, towards the end of the month, if you can provide them with supplementary heat and a light position. Otherwise a timely tidy-up and stock take, in readiness for the main seed sowing, makes sense. If we have days which are unseasonally warm and sunny then opening up and airing the greenhouse, or coldframes, is a good idea especially if you have a lot of overwintering tender perennials in residence. Too much heat at this time of year can promote them into premature growth which then dies if / when the temperature plunges again. Good air flow and ventilation, on sunny days, not only helps to keep things cool but also removes excessive moisture which otherwise causes rot and fungal attack.