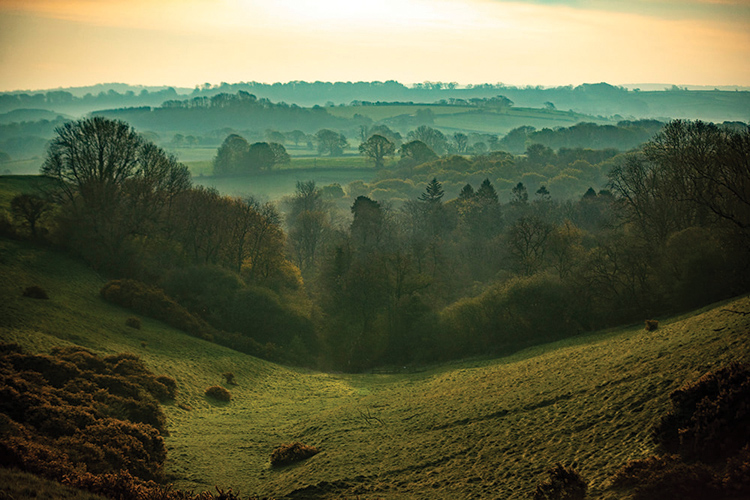 Well, we’re over the hump. It’s July and 2020 has not failed us so far when it comes to the bonkers and ridiculous. We left Europe, the world shut down, and now the crew of SpaceX are reporting that they almost clipped wing mirrors with a UFO.

And you know what? I believe them too. You’d be silly not to the way this year’s going. And I bet if there actually are aliens up there, they’ll be laughing at us.

But I wonder if, when the earth spins on its axis and the aliens focus all their 17 zillion eyes upon west Dorset, whether they’ll still be laughing. There’s a milk revolution happening here in Dorset and it’s neither bonkers nor ridiculous, but weirdly very sensible.

You might’ve noticed them, ‘milk vending machines’ have sprung up around the county like bluebells in April. If you told me in 2019 that I’d be getting my milk from a machine that looks like it’s been designed by Elon Musk himself, then I’d have called you mad. But it’s happening, and it’s really quite a good thing indeed.

Just because we’ve got all these new crises on the burner doesn’t mean the old ones have gone away. Climate change, for example, is still as prevalent as ever before. A report last month by the Institute of Agriculture and Trade Policy (IATP) discovered that the emissions from just 13 dairy companies matched that of the entire United Kingdom. Big Dairy, the report suggested, receives far less public scrutiny than that given to Big Oil, despite being responsible for a considerable amount of greenhouse emissions and the forcing of milk prices below the cost of production, causing a crisis in rural livelihoods and requiring taxpayer subsidies to keep farmers afloat.

‘It’s a race to the bottom’ Oliver Hemsley, owner of Hollis Mead organic dairy, tells me. Based just outside Beaminster, Hollis Mead is one of the hot new dairies spearheading this milk revolution, with currently five vending machines across west Dorset.

Hemsley has just trademarked the phrase “cheap food costs the earth” and as the recent IATP report demonstrates, he’s exactly right. It’s this that motivates Hemsley’s business model, as he tries to develop a profitable way of dairy farming in the 21st century that gives the environment a fighting chance.
Step one is, of course, being organic. But it seems at Hollis Mead they’ve taken the regular guidelines for what qualifies a farm to be ‘organic’ and then gone to the extreme. No pesticides, insecticides, herbicides or artificial fertilisers are used anywhere on the farm—it’s all truly natural.

On top of this Hemsley’s hand-planted over 17 km of indigenous hedges in an effort to improve biodiversity—providing a habitat for all kinds of bugs, birds, insects, deer, rabbit dormice and hares. Even this has been done to no half measure, as usually when you plant a hawthorn hedge, you’re supposed to put down a plastic weed control liner to prevent grass growth and retain moisture. Hemsley spared no expense on a plastic-free membrane to ensure minimum ecological impact.

Cows are only milked once a day at Hollis Mead, compared to other big commercial dairies who might milk two, or in the case of the IATP report, three times each day—by the end producing what is basically white tinted water. Hollis Mead, by contrast, is thicker, creamier and well bodied. Meanwhile, larger dairies will keep cows indoors transporting food to them, unlike at Hollis Mead where they are allowed to graze freely in the field. The result, calmer cows that are not so overworked, as Hemsley puts it ‘a happy cow makes quality milk’.

The point of it all, aside from restoring some form of ecological stability within the dairy industry, is to reconnect people with farming. There’s no denying that so many of us are far removed from the products we consume, Hemsley hopes to change that. He plans to build a visitor centre at Westcombe Farm, the Hollis Mead site, to allow people to see the cows, even milk the cows and taste the milk, whilst also learning about the conservation, the wildflowers, birdlife and buy the products, cream, milk, cheeses and even honey and other organically produced products made on the land.

With constant public scrutiny there’ll be no alternative for Hemsley but to uphold his fiercely scrupulous standards, maintain his vows to conservation and immaculate dairy parlour.

The sixth and newest Hollis Mead vending machine is set to open on July 4th at the wonderful Symondsbury Estate outside Bridport, an excellent addition to what is already an excellent facility for both locals and tourists.

So, if the aliens do ever decide to visit, I know where I’ll be sending them. To a Hollis Mead vending machine, of course.