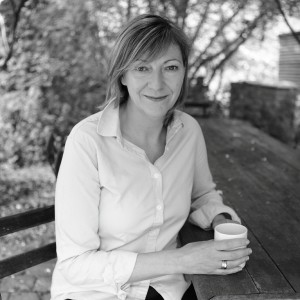 “Several things in my life turned me into a cook. I grew up in the country but wasn’t horsey or interested in country sports so I whiled away my time making rather bad fairy cakes out of packages. My grandmother lived in France and, though she didn’t cook herself, it was sitting round her table that I began to learn what good food was, seeing how well she shopped at the beautiful shops and specialist markets.

Meanwhile my mother was cooking for us out of Elizabeth David, making us probably the most garlicky children in the playground.

When I left school I went to work at Justin de Blanc in London, helping to cook the ready to eat food. It was way ahead of its time as a food shop – we had our own butcher and cooked with French butter, incredible fresh herbs and everything we wanted. I stayed for four years, certainly not wanting to work in a restaurant, though I had a couple of tries. In those days, the restaurants were just huge kitchens full of blokes, very unsuitable for women, and also I didn’t want to be on my feet cooking every night.

I met my husband, the journalist Dominic Prince, in 1990, and he suggested I should write about food. I went to see Rosie Boycott, the then editor of The Independent, and she, not knowing I’d never written anything but letters, said “Okay I’d like four hundred words in three weeks time!” I was so frightened of anybody finding out that it might be a problem for me that I did my best to perform!

I carried on loving to cook but noticed I couldn’t buy the kind of meat my mother bought. All the butchers and independent shops were closing down and supermarkets were taking over at the same time as all the emerging scandals about British food – the salmonella scare and BSE. British food was becoming the shame of Europe, a culture in decline.

It was an interesting time to write because food in the press was either recipes and eat as much filet steak as you like or bad news stories about what was going on in farming. I thought the two things needed to be able to connect in the food press rather than carry along in parallel. I wanted to write about cooking and also talk about where food came from, celebrate the good that was happening and also have a go at the bad.

I started spending time at my husband’s cottage in Dorset and began to learn about the rural food movement. The dairy farm in the village gave me a chance to hear first hand the ups and downs of producing food in the UK. It made me aware of really serious problems like the closure of the abattoirs in 2000 (due to the increased regulations after the BSE scandal) which was enormously detrimental to the high quality prime meat I was very interested in cooking. It was where I went to my first farmer’s market and understood the importance of buying seasonal produce.

Game came into my life and I became interested in wild food and foraging, in what fish were available from the coast, and then eventually in the problems with the fishing industry, including the terrible declines in some of our fish stocks.

The opening of the farm shops has been phenomenal. I don’t think you can rule supermarkets out but you should be able to use a combination of the two. Farm shops allow you to buy local which above and beyond any other food philosophy seems to tick so many boxes. It keeps the rural economy strong because it keeps the money in the district also bringing people to a place and bringing back distinctiveness. Whatever income level you’re on you can feel good about buying local food.

I wrote a column for The Telegraph called Shop Local for about a year and a half. This has become The Good Food Producers Guide, a guide to buying food from independent food shops, and the third edition comes out in October. The format is regional with the idea that someone can put it in their car and use the maps to find somewhere good to buy food. It also has quite a big section on mail-order specialist foods like smoked fish and cheeses.

My book Kitchenella came out in September 2010 and is a kind of memoir. Bless our chefs but I don’t think some of them really understand the daily predicament of having to provide good food for families. It’s really quite relentless dealing with dilemmas like cost, nourishment, health and feeding children. Baking feels like it belongs to some kind of goddess when in fact it is one of the most reassuring ways to cook and some people are just too frightened to even plan a dinner party!

Kitchenella is about hand-me-down knowledge from a lot of clever people who know how to keep a good kitchen rolling on. It’s no good having the latest recipe from someone who works in a restaurant or presents a TV show and just actually had loads of people helping them. I’m not saying we should be enslaved or cook everyday (I have days off, take-aways, we go out sometimes) but there is something heroic about the mothers and their secrets. A lot of them don’t write it down and the book is full of tips and short-cuts, recipes that developed from conversations with people, things I saw when I was travelling, even something from an old book which always had the best way to make a certain sauce.

This food revolution has a danger of causing problems not getting rid of them. I have a whole chapter devoted to Cheap, which is not a word I ever thought I’d use in a book. There’s a chapter called Fast, how to make something quickly and easily when you’re on your own. A lot of the time mothers feed their children the best of the kill and neglect themselves. We have very little time and you can’t argue with someone who chooses to play with their kids rather than spend three hours cooking for them.

My book The New English Kitchen: Changing the way you shop, cook and eat is a collection of recipes, laid out by ingredient which means you can look in your fridge and then decide what to cook. It’s about variety and introduces things people don’t think about eating very often. I like the idea of fast and feast, with a good old blow out on Sundays. But we don’t sit here in England eating steak and kidney pies all day, we’ve had olive oil and lemons in this country for five hundred years. We pirate food from everywhere and include it with the fresh food we produce so well and have always been very eclectic, cooking with spices and herbs. I think true English food is a kind of hybrid. I don’t want to eat imported pork because we have perfectly good pork but we don’t produce lemons and I can’t live without them, they’re my second salt.

My book The New English Table: 200 recipes that will not cost the earth is about leftovers and economy. The great people in cookery were doing all this lovely food on the TV yet nobody ever mentioned money. I wanted to bring back the concept of buying good quality food to be responsible because of the food chain. We have to be good consumers, make something go further and get the most out of it like wearing a really good coat you love until it’s in threads. Low-grade food, like disposable fashion, is something to chuck away. I like the concept that when you buy something good you eke every last bit out – stock from the bones, other things from the cold meat and vegetable peelings. Using good quality food to its limit makes it affordable.

I love good cookery books – Elizabeth David, Jane Grigson, Anabel Boxer – and it was a combination of reading so many and working in 1992 for Clarissa Dixon-Wright at Books for Cooks, a cookery book shop in Notting Hill, that inspired me to write. Also, it was my curiosity in the whole world of food. It was the information that stayed in my head when other things seemed to slip out of it. I’m not very interested in high gastronomy, I like restaurants that serve original or authentic food or that’s very accurately cooked. I used to go and sit in restaurants to learn, hanging around their kitchens to see why their watercress soup was bright, bright green for example while mine turned to sludge.

At Books for Cooks I was cook, washer-upper and waitress in a test kitchen with about twenty seats. It was very popular and I remember Ruby Wax coming in once with Alan Rickman, who played Snape in Harry Potter. I was absolutely besotted with him because I’d just seen him in Les Liasons Dangereuses on stage. I cooked their lunch with hands shaking and then they asked for a cappuccino. I was so flummoxed by the celebrities I ground black pepper onto his right in front of them!

In my eight years doing food stories for The Telegraph I’ve travelled a lot. After being very un-travelled in my twenties, I’ve written about sake in Japan, vanilla in Madagascar, spices in Sri Lanka, tuna in the Maldives, salmon in the Faroe Islands and Alaska and brown sugar in Mauritius. For a while it seemed everywhere I went was suffused with natural disasters, from a nasty earthquake in the Japanese mountains to a hurricane in Cuba. It got to the stage where the editor at The Telegraph just sent a message saying could you tell me where you’re going next because I want to make sure I avoid the area!

Next for me and the food industry? Well, there’s the bakery I started in November with the children (Jack, 15 and Lara, 13). I have a strong conviction that even when you’re young you can earn money in such a way that you can learn something that might be useful later on. We just had the idea of baking some bread and selling it to the neighbours and it was made possible by Giuseppe Mascoli, who gave me a piece of sourdough from his pizzeria in Brixton Market. We get beautiful stone ground white British flour delivered once a week from Cann Mills just outside Shaftesbury. We make three kinds: a white sourdough (that isn’t white because the flour’s so full of oils), a raisin white unsweetened sourdough and a rye and spelt bread.

We mix the dough on Friday evenings in big vats, using both arms to mix in the yeast with the flour and water. Then we shape it late at night, flour the napkin-sized cloths and wrap each piece of dough in one and bake them on stones. We make about fifty loaves, helped by my catering oven and a big paddle, and our neighbours come on Saturday morning. The children give up a lot of their Friday evening for it but we wouldn’t still be doing it if they didn’t enjoy it. People keep coming back for it and it makes me think that I’d like to develop the whole thing a bit more into something more formal.”