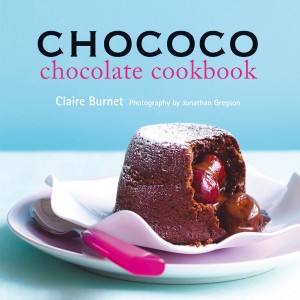 “I came to this business partly because of a love of food which I blame on my mother. She’s a complete foodie. I was born in Singapore and my parents met and married out there. My mum was really into eastern flavours and I suppose we had a bit of an eclectic upbringing on that front.

We came back to the UK when I was eight and my mum just carried on with the cooking. She was about feeding us blinis and polenta and risottos before they were heard of as food trends. I used to go to school with chicken liver risotto in my thermos flask and my school friends would be going, ‘What is that?’ Then in the mid-80s my parents moved to Brussels. I would go home for Christmas and we’d go to the local chocolatier and patisserie and buy fresh chocolates, handmade on the premises, fresh cream fillings to be eaten within days, not within months. and I think that was my discovery of the world of continental chocolate.

It’s been one of those latent things as I then went into the world of marketing and met Andy in 1997. We got married in 1999 here in Swanage, because this is where Andy’s family was from. It was his emotional heartland. We had a chocolate wedding cake and our dessert was do-it-yourself ice cream sundaes with chocolate sauce. The whole love of food and chocolate was there even then, though I hadn’t come up with this idea at that point.

We were still living in London. Andy was working in the city as a finance director for a software company. I was by this point freelancing. I had wanted to set up ice cream parlours years ago but never had the guts, or it hadn’t been the right time … but it’s always been about food for me.

When in 2000, our daughter Lily came along and life in London wasn’t really working – the quality stuff was happening down here – I almost jokingly said one day, ‘Chocolate, I could do chocolate, I love chocolate, I know about chocolate!’. The more I researched it, the more excited I got. For me the concept was just what my experience of chocolate on the continent was, fresh chocolates, handmade on site, fresh ingredients, no additives, no preservatives, use local ingredients where you can and let’s talk about the chocolate. Let’s talk about the origin, the bean, about where the chocolate comes from and let’s not talk about Belgian chocolate. A lot of chocolate makers still talk about, ‘Oh this is made with the finest Belgian chocolate.’ Who cares? That’s where it’s processed. Let’s go back to where the chocolate comes from. and I think that’s partly from having done quite a bit of travelling over my time. I wanted to tell a story about food for our customers, hence the map of the world on the wall. It’s not just about the chocolate, it’s about vanilla, it’s about cardamom, apricots, raisins, sugar, it’s about the local ingredients, also to really educate people that quite a lot of food grows on trees, and where does your food come from?

I think it was becoming a mum that made me really re-evaluate food and what I was feeding baby Lily and what we were eating – how many people were involved in it and how intensively farmed it was and how many e-numbers there are in it. So I really started with the proposition right from the word go that it was going to be fresh, it was going to be as local as possible and it was going to be ethically sourced. If I couldn’t go local I’d want to know the full provenance of what we were buying. So we’ve never been to a cash and carry, I’ve never bought blended product and we’ve always tried to trace as much as we can back to source.

The products we used were way beyond fair trade. Fair trade is a label. It’s not a guarantee of quality by any means. It works to certain categories for certain industries, but it’s debateable how much it’s working in the chocolate industry. The cocoa bean is indigenous to South America, Venezuela into the Central American belt, and the Western Amazon Basin, as well as in West Africa. The fair trade system is being used in West Africa which actually produces the poorest quality beans, but the greatest percentage. The fair trade premium is paid to the cooperative. That doesn’t necessarily mean it goes to the farmer and there are some very wealthy cooperatives out there – there are not necessarily very wealthy farmers.

Our chocolate is produced by independent companies, like for example Mott in Grenada. His is a tiny business, it is a cooperative. We’ve been out there and we’ve met him. We’ve met the guys he works with; there is massive traceability.

So actually the higher quality you get, you won’t see fair trade on it. It’s a bit of a red herring in the chocolate world. We call it beyond fair trade and it’s for connection with the producers, with the farmers, and actually there’s much higher value added to the local economy for them to produce a finished product than there is to export raw beans – even if it is fair trade raw beans. These businesses that are actually producing a finished product for us to work with, are adding a lot more value to the local economy because they’re using milk, sugar, labour and packaging, and they’re sending a finished product. So I think it’s more nuanced than just fair trade.

That said we do our bit when we’re using sugar and things … not that we add any extra sugar into our chocolates, because obviously chocolate comes with a certain level of sugar added already. We don’t add extra sugar, but when we do make cakes and goodies for the café we will use fair trade sugar and fair trade cocoa powder.

We obviously also use local eggs, butter, milk. All our milk and cream comes from Trevor Craig’s Farm Dairy. He’s in Osmington, near Weymouth, and he is the last dairy farmer in south Dorset that still supplies local. Obviously you’ve got the north Dorset guys, but he’s the last south Dorset one. And we’ve worked with Trevor’s cream since we launched. My first meeting with him, when we were still researching everything, was in his cowshed, with Lily, who was about 18 months old, toddling around eating a marmite sandwich. I was chatting to Trevor about this mad idea I had that I wanted to make fresh chocolate. He was saying, ‘Yeah, OK, well I can supply you with cream,’ and discussing how we were going to do that and me going, ‘Am I mad?’ And him replying, ‘Well it probably beats sitting in an office in London doesn’t it?’ I’ll never forget that and Trevor’s been a big supporter ever since. We love his cream; he’s not organic, but he’s low density and his cream is rich, thick and yellow and just gorgeous and we love working with him. It’s fun and I think he’s quite proud of his involvement and he’s managed to still keep supplying us as our capacity has grown.

Loads of chocolate people now talk about fresh, origin chocolate. The provenance of chocolate is all the rage. There was a phrase coined by the Sunday Times a few years ago on the theme of local and ethical food – ‘the Latte Factor’. Local, Authentic, Trusted, Traceable, Ethical. I feel quite proud that we had done that in 2002.

Chococo is a small business. We opened our doors in December 2002 in this Lanes area that we could see the potential of, right in the centre of Swanage. It’s a back alleys area that all the locals had forgotten. When we opened it was a hairdresser’s with just one room upstairs and one room downstairs. We put the factory, or our little chocolate kitchen, on the ground floor, and we put an internal wall in with a window so people could watch us making. And we put the shop upstairs which is mad, but that’s what we wanted to do. Because we wanted to show that we were real people making real chocolates. We call the shop ‘Cocoa Central’. So you come to Cocoa Central to eat, drink and play with chocolate, even though we’ve now outgrown the kitchen.

In my Chococo Chocolate Cookbook I try to keep it as simple as possible. I am a mum and I am busy and there are not enough hours in the day, and yes, there are times when we all want to do something as a bit of a treat, but I wanted to make the book really approachable. I have just tried to make the recipes practical to the point that my ten-year-old Lily can be left in the kitchen, completely unsupervised, and make the flapjacks and the chocolate cakes and the cupcakes and the muffins quite happily on her own. And I think, well if a ten year old can do it; it’s practical.”