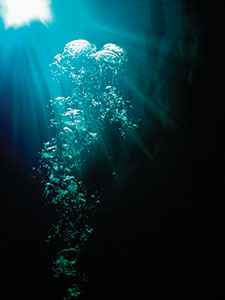 ‘Oi, what’s happened to me sand eel?’ said Ben, grumpily, as he held his rod up and swung his baited line into the boat. ‘Something’s taken a huge chunk out of it!’ He laid the now stone-dead sand eel on the deck of Carra Carra. Sure enough, there was a circular hole ripped into one side of the eel, penetrating as deep as the bloody back bone.

‘You’ve been cuttled’ said skipper Pat Carlin. ‘Next time you feel something tugging when you’re reeling in, take it slow. See if we can get one’.

Cuttlefish are a strange and marvellous species. Like squid, there’s something very foreign and exotic about them. Which makes it even more of a surprise, to encounter them in British waters, which at this time of year, we often do.

When I grew up, all cuttlefish meant to me, was something odd we bought in the pet shop: a white bony, crumbly tongue-shaped thing, that we’d take home and jam between the bars of my budgie’s cage. My budgie, Dougal, would peck at it and grind his beak against the white pumice-like stuff. Cuttlefish do actually provide an important source of calcium for caged birds, as well as help to keep budgies’ beaks from in-growing.

The white cuttle ‘bone’, is in fact a cross between a skeleton and a buoyancy aid, which the cuttle carries buried beneath its squid-esque body. The crumbly texture of the bone is caused by a structure riddled with a mass of tiny air and gas pockets that help it to float and stay upright in the water.

Its front end is an octopus-imitating mass of eight tentacles, in the centre of which is a hawk-like beak. Its beak is sharp. Its tentacles are strong. And the result of a cuttle attack, is exactly what happened to Ben’s sand eel: a big gaping hole of bleeding flesh. It happens to anglers’ fingers too, if they’re not careful. If you land a cuttle fish. Which isn’t always easy. Do keep it. Do eat it. But don’t stick your finger in its laughing-gear, while it’s still alive. If you do, your piano playing, nose picking or fly tying, will henceforth be seriously compromised.

‘Trick is to reel in very slowly, especially when it comes to the surface’ says Pat. ‘Then, hold your bait in the water, while I grab the net.’

Only a drift or two later, another one of our charter crew, David, shouts that he’s got a cuttle on his hook. Fact is, they rarely actually get hooked. They grab hold of the sand eel and will snack happily on eel flesh, all the way up from the depths, if not disturbed. Try and lift them out of the water though, and they’ll just let go. But, if you hold them at the surface and slip a net underneath, they can be scooped out, before they make a jet-propelled dash for the sea bed. Pat got David’s cuttle in his net. Yet, even when it was securely bagged, he kept it in the water and gently bumped the net against the outside of the boat. ‘Watch this’ he said, ‘he’s going to squirt’.

As if on cue, the cuttle shot a cloud of black ink into the water. A thin jet even broke the surface and splattered up the side and over a neighbouring angler’s cheek.

Cuttlefish are full of ink, called sepia. And they use it in exactly the same way that octopus do, to create a smoke screen, to confuse any attacking predators. The ink is ejaculated into a craftily cuttlefish-shaped cloud. So, they leave a silhouette of themselves, hanging in he water as they rocket to the depths. One single cuttlefish can squirt enough ink in a minute to cloud 20 cubic metres of sea.
Their ink is messy, thick and black. But, if you save it you won’t be sorry. Cuttlefish risotto cooked in its own ink has a fabulous rich and slightly sweet-sour flavour all of its own.

They belong to the cephalopod family, like squid and octopus. Versions of cuttlefish inhabit all the oceans of the world. They live fast and die young. A cuttlefish’s life span is rarely more than three years, and they become sexually mature after only 18 months.

They spawn in the spring and early summer, in warm patches of water around the south coast. They mate head to head, and the male cuttle passes a sealed packet of sperm into a pouch situated just below the female’s mouth. She then finds a cave or a rock crevasse, to hide in and lay her eggs, one by one, passing them over the sperm packet to fertilise them.

After mating, the female’s bodies deteriorate and they die quickly, leaving the sea bed littered with white corpses, which attracts shoals of bottom feeding fish like skate and black bream, who eat them up wholesale in their own post-spawning feast. It is also the reason why squid strips make such great bream bait.

They have three separate hearts inside their bodies which pump blue coloured blood. And marine scientists have recently discovered that as marine molluscs go, cuttlefish are rated as extremely intelligent, presumed to be something on a par with rats.

Apart from their vicious beak and ink cloud, their greatest defence strategy is to change colour and camouflage themselves to match their marine environment. Even at birth a baby cuttlefish can display as many as 13 different patterns and their colour repertoire increases radically with age.

Cuttlefish may be masters of disguise, but even armed with an array of chameleon-like costume changes, they still aren’t quick enough to dodge Pat’s net. Thank God.