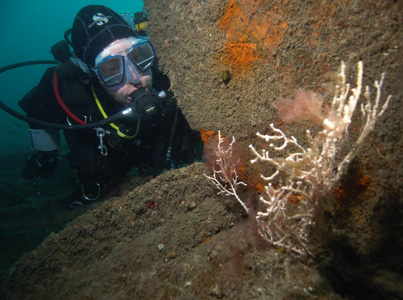 As you gaze out to sea from Lyme Regis Cobb do you ever wonder what lies beneath that constantly moving multihued expanse of sea? Does it resemble the land above with rounded hills and steep-sided valleys or is there a flat featureless plain down there littered with the decaying remains of sunken ships? And how deep is it anyway ‘full fathom five’ or hundreds of metres? I think I can now claim an inkling of knowledge of the seabed after hundreds of dives but ask me to draw a map and I wouldn’t know where to start. During a single dive I might cover 800 metres but even on an exceptional day I will never see more than 10 metres of seabed to either side of me – and usually it is much less. All this in a permanent green-tinged gloom with colours filtered to the point where cut flesh oozes ink-black blood.

The seabed in Lyme Bay is covered in the main by areas of thick undulating mud but it is far from devoid of life even in these grey submarine deserts as there is much, albeit invisible, burrowing life. However, the oases in this realm of Poseidon are the rocky limestone reefs and shipwrecks scattered across the bay. In places these reefs take the form of jagged 2m high ledges rearing from the seabed like fortifications. Sometimes there are plateaux terminating in 6 or 7 metres high precipices.  Depths a couple of miles offshore are in the 25-metre range but of course shallower on the reefs. These reefs are covered in marine organisms—there is no bare rock to see. The pink sea fan, a gorgonian (a sort of colonial soft coral), is the dominant species.  Looking like flattened roseate trees they vibrate gently in the current across which they are aligned so that the individual polyps can feed on the plankton borne by the tide. Between the thousands of fans are colonies of Ross, a bryozoan, that resembles nothing so much as a packet of huge cornflakes glued together in a bowl shape. Ross shelters countless small creatures in its maze-like interstices and is frequently used by rays and catsharks as a surface on which to bind their egg cases.

The most popular dive site in the Lyme Regis area is not a reef but the wreck of the collier Baygitano, sunk in the dying days of the Great War by a U boat and lying 20 metres down about a mile offshore. It is recognisably a wreck and situated on a sandy seabed, it functions as a reef. Now surrounded by thousands of ghostly white sea squirts it is gradually disintegrating. In 1968, aged 17, on my tenth dive, I was awe inspired. The boilers loomed above me in the dim light and I was surrounded by a huge shoal of pout that held station over the wreck. The dive was short as in those days we were using small capacity ‘tadpoles’, low-pressure tanks of compressed air originating from fighter planes used in the Second World War 25 years earlier, but I have never forgotten the experience. This year I dived the wreck a century after its sinking and a half century after my first dive. It has changed with the years; plates have collapsed, railings have gone but the triple expansion engine block remains as well as the massive boilers. As a reef it has become heavily encrusted with marine life. The huge shoals of pout and pollack remain with a flash of darting silver provided by the occasional bass. Several species of wrasse patrol the wreck including the orange and electric blue cuckoo wrasse, the bronzed goldsinny and the tiny blue rock cook. Little leopard spotted gobies dart for cover as the diver passes and lobsters shyly reverse into the shelter of the plates. A diver with a torch can shine it into the darkest crevices and frequently will be startled by the cold dead eyes of a blue-grey conger eel, its dorsal fin gently rippling along what can be a spine more than two metres in length. They often share their homes with edible crabs or lobsters but whether this is a true symbiotic relationship it is difficult to know.

The boilers are becoming encrusted with the vividly coloured jewel anemones that clone themselves into multicoloured patches. Most exciting of all is the return of species not seen for many years such as the orange crawfish with its long waving antennae and the angler fish (or monkfish), a master of camouflage that waves a fleshy lure above a well camouflaged mouth (in fact the fish seems to be practically all mouth!).

There is no doubt that the establishment of the Marine Conservation Zone has had a dramatic and beneficial effect on the marine life of Lyme Bay. We need more zones like this around the UK; currently, only a tiny percentage of our seas are protected in this way.