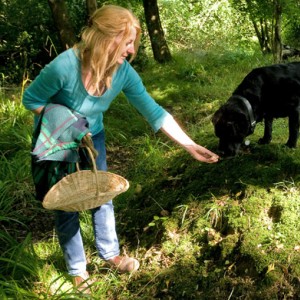 Ever since man first learned to communicate, passion has been a source of huge inspiration – powerful emotions have compelled human beings to reach for the impossible, and often achieve the unimaginable. Whether building spacecraft, writing sonnets or expanding the horizons of medical science – like trees or plants that reach for the sky – it is often the passion of one individual that drives others to great heights of achievement.

Dr Joanna Francis is one of those who possess that passion. A woodland restoration expert, her enthusiasm for the natural world she lives in is powerful and infectious. Although her main job is as a restoration ecologist, she forages, along with her dog Henry, for fungi, berries, leaves and other wild food whenever she can, often supplying them to a local restaurant in Beaminster, West Dorset. Her eyes light up when she talks about foraging expeditions in local woodland. “When I see the first chanterelles of the season my heart sings!” she says. “I would have made a great cave woman. I would have been much better off being born many, many years ago – because gathering from our wild larder is just inherent in me. It’s not something I do from a weird, alternative perspective, but because it’s completely a part of my psyche.” Five minutes in her company and I find myself wondering how any youngster could have wasted time climbing trees, when there was so much to learn in the undergrowth below them.

She remembers being pushed in her pram as a child while her parents pointed out edible foods in the hedgerows. She grew up in West Sussex where her family owned a Garden Centre and Nursery, and this helped instil her original interest in botany, which she learned primarily from her father. He taught her to be observant and, as a four year old, to use books to look up different plants to see how they grew and reproduced and in which habitats they lived. She also remembers how her mother’s foraging trips were an adventurous mission to gather the season’s full bounty. “She wouldn’t just take us out to get a few blackberries for a single crumble, for example, we would go on a mission until all the blackberries had been picked”. The place where she grew up has now been engulfed by Gatwick Airport. With more than a hint of sadness she reflects on the loss of “those lovely semi-natural habitats, ancient woods and old grasslands. I remember what grew in them as a child – I can now interpret what important habitats they were and yet they are all gone”.

After gaining a Botany Degree from Imperial College, she spent a little time in the City, and then for a spell with her own flower shop, before accepting that there was something far more powerful driving her. She undertook a PhD in Woodland Ecology back at Imperial College where she met renowned fungi expert Ted Green MBE who became her mentor. Founder of the Ancient Tree Forum, Ted Green is a pioneer of the theory that ancient trees were once ‘working trees’, serving man over many centuries. He promotes the view that they should be regarded as historic living monuments – a view that Joanna enthusiastically subscribes to. She understands that the whole natural system relies on what goes on under ground. “I am fascinated by the role that fungi play in woodland habitats” she says. “It is such a complex system and, fundamentally, fungi are running it. They are the primary nutrient recyclers, without which the woodlands would look completely different because none of the timber would break down. They are essential for the health of natural woodlands. Yes, there are a few fungi such as Honey Fungus and species of the current rogue Phyphtophora that have become detrimental to us, killing trees, hedges and plants in our tidy gardens and managed forests. Where the fungal flora is kept in balance as in semi-natural woodlands that very rarely happens, because they are contained by the rest of the fungi in the habitat. That some fungi are edible, and as Ted would often say ’are all aphrodisiacs’!, is how that world opened up to me, but I have since realised their inherent importance within my favourite habitat. I went out most days in the autumn for about five years while I was doing my PhD and I was very, very lucky to meet some of the Gods in the fungal world. I learnt such a lot from them.”

She follows an unwritten code of practise when foraging, ensuring that rare plants or mushrooms are not picked and makes sure that a member of each generation of whatever she finds stays behind. “It’s important that you don’t pillage as they are all natural foods for other wildlife” she says. Apart from the deeper need to understand the world she works in, Joanna sees huge benefits for anyone wanting to enjoy foraging. She loves the fresh air, the healthy walk and the seasonality but, most of all, not knowing what might be around the next corner. “I love the fact that I go along the path on a normal walk one day in March” she says, “and suddenly there are some new shoots, and I think right, now it’s time for me to have my nettle soups, my risottos and omelettes! Spring has arrived.”

She has now dedicated herself to breathing new life into habitats after ‘man’, or humankind, has disturbed them. Her passion for what goes on at and, most importantly, below ground level leads to an interesting and compelling analogy between what can and can’t be achieved. “If we really, really wanted to,” she says. ”we could, for example, move St. Paul’s Cathedral in its entirety, shifting it brick by brick from one place to another. We have the technology, we could rebuild it. However we cannot do that with an ancient woodland.” As she so rightly points out, this is partly due to a lack of interest. “People happily pay for a day at Alton Towers, but put a price on visiting the woods with all their rich natural heritage and nobody would come.”

It’s not an uncommon reflection of the world we live in, and the power and resources that go into marketing a plastic, and lately ‘virtual’ world, all but wipe out the attraction of the natural earth we grew up on. This is why we need the passion and knowledge of people like Joanna. They offer inspiration on so many levels. Joanna is now delighted that her sister takes her three little daughters on similar foraging missions along bountiful hedgerows to those they shared as children. The earth is a giant beast and each of us spends a very tiny amount of time on it – we should make the best of that time. So if you happen to be wandering the woods and you meet a giant black Labrador who answers to the name of Henry, you may be lucky enough to find one of nature’s really passionate supporters very nearby.