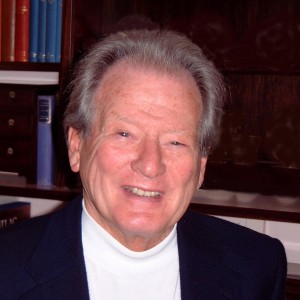 Sir Neville Marriner is one of those rare men who seem to utterly defy the ageing process. When I met him in April he was about to celebrate his eighty-sixth birthday and his attitude to life was like that of a man half his age. As we strolled around his Somerset home he enthused about his family, his career as a conductor and his collection of contemporary art, with an obviously genuine modesty and an engaging charm.

He cites his home and the county he has chosen to live in, as a major re-energising factor that allows him to travel the world, working at a pace that most of us would find impossible. We’re only in Spring and he rattles off a list of locations where he has conducted this year already – Vienna, Berlin, Paris, Tokyo and Los Angeles – “and of course we spent some time in Australia also” he says as an afterthought. According to his wife Molly, they have been on five continents in five months. He is amused by a booking in the diary for a month in Tokyo in 2012 “I think there’s some fascination about geriatric conductors,” he laughs. “To imagine that at this great age I might still be able to stand up and do a month’s work in some foreign parts is hard to believe”.

Yet for all his high-profile conducting work and travel to exotic locations, he still manages to make time for local engagements. He is proud of his local activities saying, “I’ve conducted the local orchestra in Axminster and one in Seaton and I’m conducting the chorus in Axminster this Summer.” He points out that “being here you don’t get any of the professional pressures, don’t even get a decent signal on the mobile phone, so it’s quite peaceful. It means I can do most of my preparations for concerts and things down here.”

Born in Lincoln, the son of a builder who had a passion for music, he remembers live music as a constant in his youth. “Before I ever picked up an instrument at all I don’t think I went to bed without music going on around the house.” He remembers his father as a strong Methodist who played piano and violin, “rather badly” and conducted the church choirs. His father bought him his first violin and taught him until he was about 11, by which time Sir Neville was winning medals at local music competitions. At sixteen he got a scholarship to the Royal College of Music as a violin player. After a short spell in the army, he went to the Conservatoire in Paris, where he admits he may have learned more about life than he did about playing the violin.

Although he never intended to be anything other than a violin player, his conducting career was to change his life completely. He recalls meeting a lady who used to sign his cheques when he did work for the BBC, earlier in his career. She remembered how she wrote them out for four guineas, five guineas, eight, twelve, fifteen and twenty and then said ‘I don’t know if you ever got beyond twenty!’ Contrast this with what Sir Neville describes as his ‘fantasy life’ when he was first flown over to California to become musical director of the Los Angeles Chamber Orchestra. “I remember thinking how very extravagant it was to be sent on an aeroplane,” he says. “When we got there we were met by a limousine about as long as a bus and driven into this palatial establishment in Beverley Hills. I remember it was evening time and there were blue lights over the swimming pool and recorded music coming out of the trees. And the house was completely made of glass. It was where one of the Marx Brothers had lived I think. There were all sorts of strange film people in the houses around us.” He recalls how his next-door neighbour’s monkey got loose one day and was chased through the garden by assorted gardeners, a little girl and a butler, fully clothed in butlers uniform.

Last year Sir Neville and his fellow musicians in the Academy of St. Martin in the Fields orchestra celebrated 50 years together. Their story, and that of Sir Neville’s extraordinary life, are well documented and celebrated in various publications, as well as in an excellent book by his daughter Susie Harries and her husband Merion, and now in a new book by Christian Tyler.

However, the story carries on. His son Andrew is principal clarinet in the London Symphony Orchestra and as Sir Neville puts it, “He has a crazier life than me! Today he is in Dubai for two concerts and then the day after tomorrow he is in Bombay – it’s quite extraordinary to be able to do that.” Sir Neville was recently commissioned by the 76-year-old billionaire American composer Gordon Getty to conduct a piece of music he had written. “He flew over in his private plane with his guests for the recording and afterwards gave a grand dinner party in a hotel for everyone involved. We got past the first course and suddenly he called ‘silence, silence, silence…’ and he stood up and started singing an aria from one of the better known Italian operas. So he sat down and we all clapped. That was all fine until then he stood up and did it again before the pudding!”

One suspects that Sir Neville Marriner’s ability to see and enjoy humour throughout his life has armed him with endless anecdotes from what one might call the classical equivalent of a rock and roll lifestyle. Gentler perhaps, compared to more modern excesses, but like the music it presented, it has more depth, texture and substance than much of what we hear today.