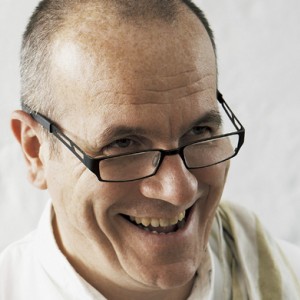 Richard Bertinet may prove to be a great advertisement for the boy scouts. One of the first nuggets of wisdom he passes on to me about his cooking style is the need to be prepared. “It makes it easier to just sit down and enjoy your food” he says. “Cooking is only a small bit of it. It is the preparation of all your ingredients – the cooking part, if you look at it, is very simple stuff. The preparation is what takes time. I believe it is a bit like winning the 100 metres, your race will last 10 seconds if you are very good, but your preparation will last two or three years.”

Owner of The Bertinet Bakery and The Bertinet Kitchen in Bath, Richard came to prominence when he published his first book Dough in 2005. A hugely successful book on the subject of making bread, it won numerous awards including the James Beard Award for Best Book (Baking & Deserts) and the Julia Child Award for Best First Book. Richard exploded the myth that baking bread must be a necessarily daunting and time-consuming task and showed how, having a quick and easy bread baking in the oven while dinner is cooking, is just as natural a part of preparing the meal as opening a bottle of wine. He followed up with Crust in 2007 which won World Gourmand Award for Best UK Book (Baking).

He has just launched a new organic bread range which comprises more than a dozen breads. They will be available in London’s Selfridges Food Hall and in Riverford Organic delivery boxes in franchises in much of the South West and across Wales. His bread will also be supplied to restaurants such as Angela Hartnett at the York & Albany, Tom Norrington Davies at Great Queen Street and many other restaurants and delicatessens in London, Cardiff and the South West. Speaking about the launch of the new range Richard says, “I grew up in a culture where wonderful bread was something everyone would buy from their local bakery every day, and spent the past seven years seeing the extraordinary response to my books and bread classes from people discovering the satisfaction of creating their own bread. Now I am on a mission to make great bread available to everyone – bread you can trust as much as something you have baked yourself, bread so good you will eat your crusts and use every last crumb.”

However in his early days in the industry Richard wasn’t exactly enamoured with his job. “I really hated it” he tells me. “I started it when I was fourteen and I thought it would be a good idea. But all my friends, they were mechanics or something like that, and on Friday night they would all get a night off. They would all go to a pub or something and I would go to work. So I used to hate my job. And my day off was Monday – where I lived that day it was a ghost town, there was nothing going on. So you sleep during the day, you are always tired and you become Mr Grumpy a bit.”

He remembers how the local bakery tempted him even as a young boy. “I used to peek through the door to see the workmen in the back. And the oven, I was fascinated by it. One day I found myself behind the door and I couldn’t get out again. To buy the bread was one thing but I was always very fascinated with what was going on behind the door. The baker was very proud to open the door and put the bread in the shop, he was like ‘Hey look at me, I’m the baker, I’ve made this bread.’” Richard decided he also wanted to be able to show that pride. “Bread is part of your blood, you learn to work with it. If you care about your job, you get caught in a spiral and you can’t get out of it. I have absolutely no regret. I have moved on since – working the hard way when you are young isn’t bad for you.”

Richard enjoys the social benefits of cooking with family. We talk about our children and he points out the value of time spent sitting around the kitchen table. “We are all in the kitchen, having a bit of fun, a glass of wine” he says. “We get the pleasure of relaxing around food. When your girls are 16 or 17 they will love cooking with you: when they have problems they will be able to share them with you whilst cooking. In the old days that’s what they used to do. People used to sit around the big table, peeling the potatoes and solve problems.” He paints a picture of a genial camaraderie that so often is not found in commercial kitchens.

With pride he tells me that Dough has now been published in 15 countries and in 12 different languages and that there is one lesson he takes with him in whatever he does – simplicity. “I want people to understand, there is nothing complicated about it. There is no French word that people don’t understand. It is giving people a little push, ‘come on, have a go, don’t be scared of it.’”

Dough was soon followed by the also successful Crust, but Richard’s latest book, Cook: in a class of your own with Richard Bertinet takes a slightly different path. Since his cookery school in Bath now attracts pupils from all over the world, it is logical that he should offer some of his extensive knowledge to those that may not be able to attend courses in the West Country. Cook takes Richard’s understanding of the need for simplicity and preparation to a level that many amateur cooks have been crying out for. The book makes no effort to draw readers into complicated recipes but prefers to concentrate on answering the questions that many of us are afraid to ask, whilst at the same time giving hands on advice on simple yet very satisfying kitchen tasks. That’s not to say that Cook isn’t jammed solid full of mouth watering recipes. From Pork fillet stuffed with Gruyere, Sage and Bacon, and Braised Little Gem Lettuce, to Mussels in the Bag with Ginger, Chilli and Lemongrass, the book sheds inspiration from every page and it’s hard not to want to rush to the shops for fresh ingredients. Unless you want to spend the wee hours of the morning pan-frying, beating, battering and buttering it’s best not to take this book to bed with you. Like Richard’s personality it may become slightly addictive.