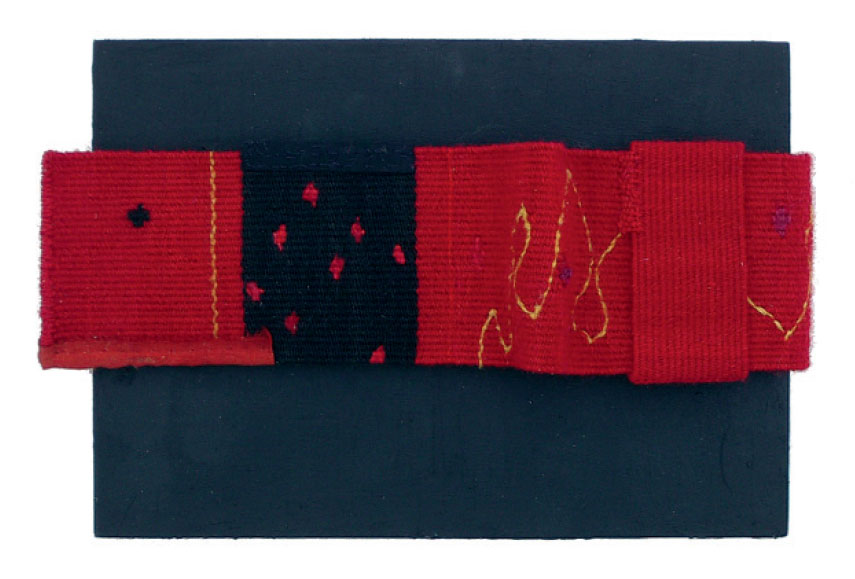 There is an undeniable eroticism in Jacy Wall’s woven and cut textiles, they speak of concealment, hidden secrets and of a time when garments were not discarded when they became worn. They were patched and darned and repaired until there was almost more added than original left, and the fabric itself developed that wonderful patina of age through handling and wearing and being rubbed against a washing board by coarsened red raw fingers. She treasures her grandmother’s exquisite set of samplers of invisible mending. Virginal morsels of white lawn, linen, fine wool, cut into, ripped and then mended with impossibly tiny stitches using the finest of needles and the thinnest of cotton thread. Wall follows in the footsteps of this tradition of repetition, perceived in the past as ‘woman’s work’. It is slow and time-consuming, slave to the rigidity of the loom, the bobbin echoing the rhythms of darning and mending as it weaves in and out of rows of thread held in tension.

She has always taken risks. At the age of twenty-two she gave up a safe job and set off for an Italian adventure working for the Society Portrait sculptor Fiore de Henriquez in Peralta. She then had the courage, when she found herself making curtains, to admit that this was no longer exciting or an adventure, and returned to London. However one result of the Italian trip was an awakening interest in printmaking. On a trip to Rome with Fiore she had been taken to see an Italian printmaker and was fascinated by the press realising she wanted to “do” things rather than be an observer. On her return, sidetracked by a weekend weaving course, she took a degree in Constructed Textiles at Middlesex Polytechnic, following which she made one off pieces, hangings and rugs to commission. In 1994 an Award by the Theo Moorman Trust enabled her to reassess her working processes, address the areas of work which she felt had got stale and spend more time in the studio.  She visited exhibitions of contemporary textiles and painting, studied historical and ethnic pieces at the Museum of Mankind in London and the Holburne Museum of Craft in Bath. She had expected to be drawn back into textile design but her researches led her once more towards weaving, “remembering that for me tapestries are perhaps about aspects of fabric and not about pictures”. She began to realise that the key to moving on was to incorporate simplicity in both design and colour range into her work. The award culminated in a successful exhibition but it was the large piece that she made two years later, in 1996, that really revealed how far she had come in that year of research. The Wall, a huge woven tapestry in wool, linen and silk on cotton warp measures 183 x 244 centimetres and with its abstract design using deliberately unevenly hand-dyed threads it looks like a majestic watercolour with pours and drips of jewelled hues cascading downwards. Technically a masterpiece of improvisation in this medium she acknowledges that, “It was probably the most difficult thing I had ever made”.

In 2001, as a member of the Environmental Arts Group Genus Loci, she participated in a Year of the Artist project at Hestercombe Gardens in Somerset. Fifty metres of hand-dyed silk made a dramatic appearance both in the making and in the installation. During the process of dyeing she wandered into her garden and those few moments of inattention allowed fifty yards of raw silk to act as a siphon for the bubbling red dye, flooding the bathroom and seeping through the floorboards: “Red drips then appeared through the sitting room ceiling below, like some scene out of a horror film! Luckily my sofa at the time was blood red, and so drips didn’t show, and the slow seepage in fact produced fine red lines along the plasterboard joins, which looked rather beautiful”.  Finally, the piece was installed in a rill designed by Edwin Lutyens at Hestercombe; a ribbon of red flowing gracefully along the landscaped waterway incised into the soil.

But through the years, the fascination with printmaking lurked in the back of her mind and whilst working on The Wall she had also been studying Printmaking, one day a week. This led into a Masters in Multidisciplinary Print at UWE in Bristol, which she completed in 2002. The processes and time for research fed into her weaving again. The techniques of printmaking, drawing and painting ran parallel to the construction process, feeding into it and imbuing her work with a unique originality. Holding Together, made in 2002, was another seminal piece. A rich creamy length of woven wool, slashed and ripped in places, punctuated with loose-knotted cotton threads, fistfuls of tangled wool and patches of false darning. Thread-thin slits revealed glimpses of scarlet dyed silk beneath the cool cream surface.

Recently, Wall’s dry point etchings and small painted drawings have taken a more central role. The paintings retain a sense of the scale of the mended textiles to which many of them refer, giving them an inherent charm as objects of desire. Pin-pricks pierce the paper in Pierced Field and in Seeds Sown, black untidy marks bleed, suggesting stitches and tears, drawing attention to the fragility of fabric. The increasing paleness of her palette adds a poignant vulnerability. There is a cross-fertilisation of disciplines as one process spills over into the next. The works on paper, occasionally collaged with canvas or fabric, are in the nature of studies, experiments, as she negotiates her way around the impasse, which the rigidity of the weaving technique imposes on her. Using them as a form of sketchbook has allowed her to improvise on the loom, working on different sections of the weaving as the weft climbs upwards through the warp adding colour and marks which echo the freedom of a drawn mark. Combining different strands of colour from her own dyed threads in this free and easy way enables her to produce abstract compositions with swathes of subtle hues.

Tapestry has a long and honourable tradition but Jacy Wall is bent on subverting the process, picking it apart and creating a textile which is much freer in design and conception. William Morris was an early hero and she still “loves things that are handmade, useful, unpretentious”, but she balks at the label of weaver with its suggestion of craft and adherence to rules. I hesitate to say that she is a maverick but in terms of traditional tapestry weaving that is probably what she is. She constantly questions the technique, the process, the purpose and is dragging weaving into the 21st Century.