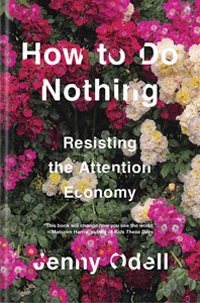 One of the most difficult aspects of this pandemic is maintaining a positive focus, which is why this month’s lit fix is brief and to the point. I’m recommending a book which is part self-help, part philosophy, part call-to-arms: How To Do Nothing: Resisting the Attention Economy by Jenny Odell (London: Melville House, 2019)
Odell is an American artist and writer, based in Oakland, California. Much of her world view is informed by her physical proximity to big tech—Facebook, Google etc on West Coast America. Her glimpses of nature are rarer than ours here in Dorset: a wetland carved out of the urban landscape of San Francisco, a city park. But as the opening quote from Walter Benjamin reads, “Redemption preserves itself in a small crack in the continuum of catastrophe”.
Make time and space to do nothing, Odell argues, and we wrest our focus away from the attention economy (our phones and computers) to reposition ourselves in a present, physical realm (“that tiny, glowing world of metrics cannot compare to this one, which speaks instead in breezes, light and shadow, and the unruly, indescribable detail of the real.”).
My father, a constant gardener, has no desire to even try social media. I, on the other hand, use Instagram relentlessly, perceiving it as a vital tool in my work as a writer and journalist (reading Odell, I suspect only 5% of my claim to productivity is really true). As for my kids, like most teenagers they’re involved with different tech platforms (Snapchat, TikTok) more than I’d care to admit. In our household, some of the most familiar four words you’ll hear spoken is GET OFF YOUR PHONE.
Odell’s book is something of an antidote to that. I’ve been scribbling in the margins of her book all month, not because it’s an easy read, but because it’s a thought-provoking one—and one I think will resonate with our West Dorset community.

1. “a dropping out, not dissimilar from the ‘dropping out’ of the 1960s”
2. “a lateral movement outwards to things and people that are around us”
3. “a movement downward into place”

In intelligent, nuanced writing, Odell gives ‘a plan of action’ to counter the noise. She argues that in silence, there is everything to hear. “It takes a break to do nothing, to just listen, to remember in the deepest sense what, when, and where we are.” The book, although written pre-pandemic to huge critical acclaim, seems to resonate even more deeply in lockdown, and the opportunities the next era could bring.
Right now, there’s no #FOMO (Fear of Missing Out) because life as we once knew it has been put on hold. But maybe when things start to return to normal, we can try to become less obsessed with constant distraction, and live instead by a more empowering hashtag: #NOSMO (the Necessity of Sometimes Missing Out). Maybe we can replace misspent time (which is only profiting the corporates) with doing less, immersed in the reality of place.
For me, however, I fear Odell has replaced one distraction with another. Her textured thinking unspools so many new threads. In putting down Odell, I’ve found myself picking up some of the great American nature writing she references. They include the works of Gary Snyder (The Practice of the Wild) and Rebecca Solnit (A Field Guide to Getting Lost). I like the link she draws, between the global push for habitat restoration (the trend for rewilding) and what Odell calls the necessity of ‘restoring habitats for human thought.’ There’s an irony to that, of course… To hear the silence, I realise I need to go further, to do nothing, not even read.