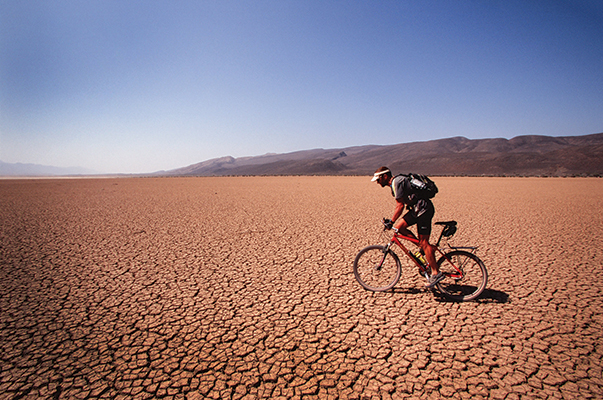 Expedition 360 gave Jason Lewis an appreciation of living within finite means and limits. He talked to Katherine Locke about some of the things he hopes people can learn from his experience, and his talk at the Purbeck Literary Festival.

If you are reading this with your New Year’s resolutions already a distant memory, take some inspiration from Jason Lewis. He went from someone who had never crossed an ocean, roller bladed, kayaked or ridden a bike for more than a few miles to a Guinness World Record holder for the first human powered circumnavigation of the Earth.

‘It wasn’t even my idea’, says Jason. ‘My friend Stevie Smith had the original idea and I suppose I was open to the thought of an adventure’. He was running a small cleaning company in West London at the time and definitely wasn’t feeling fulfilled. ‘When Stevie came up with the idea, it appealed to me because we didn’t need to be experts at anything’, he says. The pair, who met at university, had a history of taking off for weekends on random trains just to see where they would end up and they were keen walkers, but neither had ever been at sea before.

‘It is ironic really, as my father was in the Navy and is a very keen sailor. He had taken me with him a few times, sailing out of Lyme Regis, but I didn’t like it very much’. Their lack of experience created a naive innocence of the journey ahead. ‘We looked at the land sections as the easy bits’, he says, ‘but we knew from the beginning that the sea crossings were going to be the hardest’.

The pair raised the money to have a special pedal powered boat made for them by friends Hugo Burnham and Chris Tipper. The boat was built in Exeter and had a pedal mechanism devised for the purpose. ‘We did a couple of sea trials out of Salcombe’, recalls Jason, ‘but we found it hellish—difficult and boring—so we thought we would save ourselves for the real thing’.

The duo set off on their journey in 1994 when Jason was just twenty-four years old. ‘The plan was a four year trip, but it ended up taking thirteen years’ he says.   Jason explains that there were myriad reasons for the trip taking so long. ‘Fundraising being a key issue’, he says, but at the beginning they set off with the whole world ahead of them.

The first leg of the journey was cycling overland through Europe, which was pretty straightforward, the challenge came when the pair crossed the Atlantic in their pedal powered boat. The journey took three and half months, in a tiny boat, sitting less than five feet away from each other, day and night. If just the thought of it makes you feel claustrophobic, it also took its toll on the two friends. ‘Little things start to get to you’ says Jason, ‘things you probably wouldn’t even notice on land’. Small habits became unbearably irritating. ‘For me it was the way he smelt’, says Jason, ‘after a month he smelt like old rabbits’. For Stevie, the way Jason blew his nose over the side of the boat was disgusting beyond endurance.

The breaking point came over the laundry. ‘We did our laundry by throwing our clothes overboard and dragging them behind us on a rope’, he says. One laundry session Jason forgot about his clothes and left them out there for three days. ‘It was the straw that broke the camel’s back for Stevie’, says Jason, ‘he went nuts calculating the drag and how much longer the trip would take due to my thoughtlessness”.

Needless to say, the pair decided to take a break from each other once they reached the States. ‘We decided to cross America separately’, says Jason, ‘so we could regroup before the Pacific crossing, which would take even longer’. It was on this leg of the journey that Jason was the victim of a hit and run car accident.

‘I was roller blading through Colorado at 5pm in the afternoon when I was hit by an 82 year old drunk driver’ he says. Both Jason’s legs were badly shattered in the accident. ‘I didn’t feel any pain’, he remembers, ‘it was only when I tried to stand up and ended up on the stumps of my lower legs did I realise how seriously hurt I was’. It took months to recover, with surgery and physiotherapy, before he was able to recommence the journey.

If these stories have whetted your appetite for more tales from an extraordinary voyage, you are in luck. Jason has written extensively about the journey, publishing a trilogy about the trip entitled The Expedition. The first of the series won the Independent Book Publishers Association Benjamin Franklin Bill Fisher Award for best first book (non-fiction) in 2013 as well as several other accolades.

Jason spends much of his time these days giving talks to literary groups and schools about the venture and will be appearing at the Purbeck Literary Festival on 25th February. The audience is invited to spend the afternoon with Jason as he recounts the extraordinary feat of human powered circumnavigation. He is also keen to talk about his latest passion—planetary sustainability.

‘If I learnt anything from Expedition 360, it was an appreciation of living within finite means and limits’, he says. ‘During the journey, I passed through so many amazing places that I didn’t have time to properly explore. I am really interested in people who live in isolated places, away from the rest of the world’. There are some islands in the South Pacific that he describes as ‘micro earths’. ‘These are people who live in simple, sustainable, traditional communities’. Jason is keen to learn the lessons these people can teach us and intends to write about his findings in the future.

‘We need to find ways to simplify our lives’, he says. ‘Our grandparents knew how to make things and to mend broken objects instead of just buying new’. Being on the boat meant that every gallon of fresh water had to be pumped from the sea and every hour of electricity was produced via solar and wind power. ‘It made me aware of the consequences of my actions’, he says, ‘and how consumerist and wasteful we have become as a society’. Jason’s next challenge is learning and teaching us about how to do more with less.

The Purbeck Literary Festival runs from February 14 to 27. For information visit www.purbeckliteraryfestival.info.