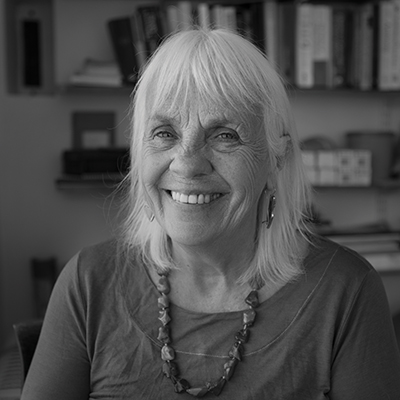 “I was born in Teddington, Middlesex—perhaps as a celebration of the end of the war! My three siblings were all pre-war and much older. From an early age I loved nature and that is a theme that remains throughout my life. I can remember being small enough to look up into the flowers of foxgloves and waiting for the bees to come. I loved each autumn gathering the apples and later turning the compost and getting out the little wiggly red worms with my father. We lived beside Bushey Park, which was my playground, and the only danger I was warned about was to be wary of the rutting deer. Most of our holidays were in Wales visiting relations, and there I was at home in the wild mountains and the cold mountain streams.

I left home and school at 18 and spent the summer delivering milk for my uncle who had had a stroke; then returned home to run the office of the first nuclear disarmament candidate in the 1964 election. This led to a job at Peace News where I met my first husband Rod Prince, who was the paper’s editor. I then went on to Amnesty International for a short time until the birth of our daughter Lucy, and when she was 3 months old we spent the winter in Elba. After that Rod had a job in Paris with Agence France Press and we were there for a couple of years during the ‘Évenéments’, which I didn’t see much of as I didn’t want Lucy to be exposed to teargas; but I did get to a lot of art galleries! In 1970 along came Mischa, and when he was 6 weeks old we left to live in Dar es Salaam in Tanzania, where Rod was working on the English language newspaper for another couple of years. This was an exciting time—mangoes in the back garden and meeting all sorts of people. Here I met Chinese and Vietnamese aid workers who introduced me to acupuncture. I loved the economy and simplicity of this system, just a few needles setting someone on the road to recovery. I learnt about the ideas of self-sufficiency for a developing country, a health service which was about health promotion through better sanitation and education, and the establishment of rural health centres as opposed to the very expensive high tech machines which could only be put in the city, and therefore not meet the needs of most of the rural population.

We returned to England in 1972 and lived in large communal house in Stockwell. It was a busy time full of ideas and projects ranging from exploring recycling plastics, to setting up a newsletter called the Transnational Monitor to look at the power of multinational corporations—although sadly our backer backed out. We ran a news service out of the basement, and the house was frequently full to the brim with Argentinian refugees. I decided to train to be an acupuncturist and was told I needed to become a doctor first. This turned out not to be true, but not before I had studied for the science A levels that I would need for medical school, only to be then told that they had to be twice as good as for a male applicant—why didn’t I go to a provincial medical school? Instead I applied to study botany at Bedford College.

After a summer working as a mechanic in the local 2CV garage (ours was always breaking down), my boss told me I wouldn’t enjoy university—and he was right! However, I went for a couple of terms, but left as I felt that most of the lecturers were there primarily to pursue their own research, which was fair enough, but it seemed to be along the lines of breeding square tomatoes so they would fit better into boxes for packing.

Later, I worked at Spare Rib, mainly on the sales, although we were a collective and discussed the content of each issue. There I discovered where I could study acupuncture without medical training, and I was off to the College of Traditional Acupuncutre in Leaminton Spa. This changed the way I perceived the world, health, disease and people. I was lucky enough to get another job at Latin American Newsletters in the circulation department which funded my studies.

Once qualified, I moved with Lucy, Mischa and Christopher, my new partner, to the Midlands where I set up my first practice in a small village. It felt like ground breaking work; hardly anyone had heard of acupuncture then, and a lot of educational work was needed to get people interested. In addition I began to assist and later teach at the College in Leamington. After six years, Christopher’s work took us to Cambridge. I continued to teach but it was a long drive, and I was setting up another new practice. It was here that our son William was born, 17 years after Mischa, and so, reluctantly, the teaching had to go. This was a time of further discoveries—I studied Zero Balancing and began meditation, following the teachings of Thich Nhat Hanh, one of the few teachers at that time who included children on his retreat.

Christopher had grown up in West Dorset and we had often visited for holidays, borrowing a house in Lyme Regis. In 1993 we had the opportunity to buy the house, right on the seafront—nothing between us and the sea—wonderfully elemental! At that time there were still several food shops in the town and we started doing all our shopping on foot and abandoned the supermarkets. Then along came the necessary coastal stabilisation works which made access to the house difficult. We moved house and have finally settled here in Wootton Fitzpaine, which is wonderful. We have a small flock of Jacobs Sheep which we share with Fivepenny Farm just up the road—little did I know I would learn about sheep husbandry! I love their characters, but not always their feet and dirty bottoms. My connection with the land and the sheep, and the demise of the small food shops in Lyme Regis, has awoken an interest in the burgeoning local food production in our area, and I am keen to support this movement. I don’t know what is possible here, but am heartened to know that still over 70% of the world’s food production in the world comes from small scale farmers. I am alarmed by the current proposed Transatlantic Trade and Investment Pact, and feel the fears that we expressed 40 years ago in our launch issue of Transnational Monitor were more than justified. And so as the Real Food Bus leaves our yard several days of the week, I keep my fingers crossed.

Since being in Dorset I have continued exploring, studying and deepening my understanding of the workings of the human body, health and disease. This led me to the Karuna Institute on Dartmoor to study craniosacral therapy which works beautifully with 5-element acupuncture—which is the variety of acupuncture I practise. Both systems work to enhance health in an individual rather than eliminate disease, and both focus on the whole person rather than just the specific symptoms. During this time I also spent many visits in the South Sinai desert working with the Bedouin. I was able to share with them aspects of the cranial work.

Now I am working less but not inclined to stop, and want to spend more time in my pottery. After over 30 years of practise I have honed my skills and now know that if I can make a difference, lessen the suffering, to just one person and their family, my time is well spent. I feel my life has been blessed and I have been lucky to have had so many opportunities; my family, children, grandchildren, friends, teachers, and clients—all bringing great treasures. One of my favourite quotes from WH Auden is “Healing”, Papa tells me, “is the art of wooing nature.”—I’m still working on it!’