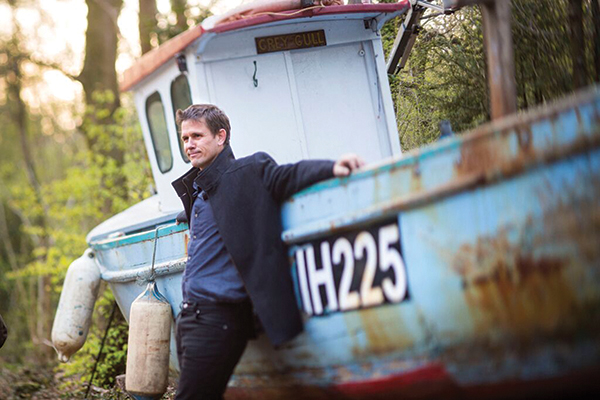 A local arts organisation worth watching is the innovative b-side, based in Portland. Founded in 2008 as part of the lead up to the 2012 Olympic Games, b-side runs a bi-annual 10 day arts festival as a
celebration of place, community and contemporary art.
What exactly does that mean?  And why is it important? Co-Artistic Director and Advocacy Developer, Sally Watkins, explains ‘Public and community art explores the unseen, the forgotten places’, she says. ‘All our projects are site responsive and celebrate the history and ecology of Portland & Weymouth. This is a unique place, in terms of geography, culture and history. The projects we commission observe that and help us commemorate the distinctiveness of the area.’
Some of the work already commissioned by b-side includes a subversive performance with puppets in a ruined church, artworks on bus stops and an orchestral sound weather station. One of the highlights of the 2014 festival was Lullaby by Luke Jerram. The work consisted of an illuminated mass bike ride that delivered a lullaby to the people of Portland via bike mounted speakers; the music was composed by Andy Taylor. You can watch a short film about the event online (http://b-side.org.uk/archive/festival-2014). Warning—have a box of tissues handy. If anyone needed any persuading about the efficacy and importance of public art, then this short film should do it.
As part of his continued relationship with the organisation, Luke Jerram will be talking about his work at a fundraising event organised by the Friends of b-side on November 27th at Stonehall, Portland. The evening is the first of a series of fundraisers and will include a light supper by Hive Beach Café chef Luciano.
Luke Jerram is a Bristol based artist and probably most well known for his work Park and Slide. A giant 300ft waterslide was installed in Park Street in Bristol and tickets were issued on a first come first serve basis.  Over 95,000 people registered, but only 360 were lucky enough to get tickets. However, the event was attended by 65,000 people and received considerable nationwide media coverage. ‘This massive urban slide transforms the street and asked people to take a fresh look at the potential of their city and the possibilities for transformation. Imagine if there were permanent slides right across cities?’ said Luke at the time.
He continues to explore large scale public work and is eloquent about its relevance. ‘For me, art has the capacity to make people look at where they live in a completely new way. A street can become a slide, the sky a canvas for making music’, he says. In the latter example, he is referring to his ongoing experimental work The Sky Orchestra, a visual audio installation comprising of hot air balloons being released at dawn and dusk and playing music to sleeping people. The Sky Orchestra questions the boundaries of public artwork, private space and the ownership of the sky.
During the fundraising evening, Luke will be talking about his projects and the importance of public art. He is passionate about the inclusive nature of shared projects. ‘For many people, visiting a gallery or museum is something foreign to them. Something other people do. b-side understands that it’s their responsibility to serve their community and reach out to everyone, not just the usual art goers.’, he says. Luke works with organisations like b-side because ‘like much of the artwork I deliver in the public domain, b-side are also taking art out of the museum and gallery context and delivering it directly to the communities we serve’.
He also has actual proof of the way that public art can change lives. His project Street Pianos (Play Me, I’m Yours) resulted in not one, but three marriages and one very public proposal. More than 1,400 pianos have been installed in over 47 cities across the world and are placed in public spaces such as stations, parks or markets where passersby are invited to play them. One marriage was the result of two Australian journalists (who had never met before) being sent to cover the story in Sydney. Not only did they get married, but Luke was invited to the wedding. Another couple fell in love (and subsequently married) over the piano in Liverpool Street Station. The third couple, from NYC, used the piano as the centre of their wedding ceremony.
The Friends of b-side who have arranged the evening started as a small group of volunteers, keen to support in the work of the organisation and help extend the reach of projects beyond the bi-annual festivals. The Friends have expanded in numbers and vision and now manage the membership scheme and host the fundraising events. The aim is to make the organisation more financially sustainable (it is currently funded by The Arts Council) and enable it to expand and extend the programme.
For those interested in supporting b-side on a more formal basis, there is the possibility of becoming a member. The organisation offers three types of membership package, each named after strata of rock found on the island. The basic membership (Bedrock) is £15 pa, whilst Whitestone and Oolite are aimed at individuals or businesses attracted to the idea of sponsoring b-side and specific events.
Many cities and towns across the globe want to be seen as innovative, creative and dynamic places to live and do business. Involvement with the arts can greatly enhance this aim by providing events and activities that draw a wide audience. The cultural capital offered by organisations such as b-side is very hard to measure. The non-financial social assets gained from being involved with public arts projects within the community are hard to quantify. It could be argued they have an ‘afterlife’ that extends way beyond the original work.
Luke Jerram is very aware of this and nurtures his involvement with b-side because ‘it is ambitious and takes risks in commissioning new artwork’. In his own words ‘Hats off to them!’.