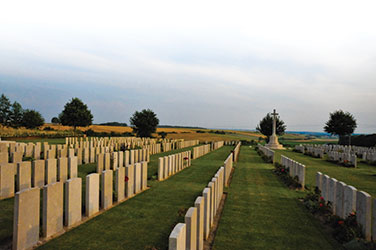 In advance of his talk with biographer Max Egremont at Beaminster Festival, Somerset-based historian and poet James Crowden gives an appraisal of the history and poetry of the First World War.

One hundred years have now passed since the outbreak of the First World War, one hundred harvests have been gathered in since 1914, but the memory of that terrible war still has the ability to cast a long shadow over the countryside.

The corn stooks, hayricks and horses have gone. Almost every village in Dorset, Somerset and Devon has a war memorial to remind us that something dreadful happened. Men went off to war and didn’t come back. Some lived in deep trenches and dugouts in Northern France and Belgium and charged pointlessly at barbed wire and machine gun nests. The names of  Picardy, Flanders, Ypres, The Somme and Passchendaele became bywords for suffering and sacrifice.

But the First War was also fought in the strangest of places: the mountains of northern Italy, the beaches of Gallipoli, the dusty plains of Egypt, Palestine and Mesopotamia, the hills of Macedonia, the scrub of East Africa, the cold seas off Coronel and the Falklands, the North Sea, The Broad Fourteens and the North Atlantic. And of course in the air.

But contrary to received wisdom, not all the fighting ended in November 1918. It spilled over into Russia with British troops fighting on the White Russian front against Red Bolshevik forces south of Archangel, even as far afield as the Caucasus, Persia and Vladivostok. Those troops did not come back home till September 1919.

The first half of the 20th century was such a complex equation of geo-political ambition and empire building, that some historians regard the First and Second World Wars as one continuous war with a gap of twenty years in between to re-build and re-arm.

What horrified people most was the indiscriminate and inhumane nature of this modern warfare. What is certain is that during the early twentieth century the psychology of warfare also changed gear. But the transition from a ‘gentlemanly’ 19th century notion of warfare with well defined rules of combat where ‘civilised’ men did not fight on Sundays to the industrial scale of killing, did not happen overnight.

What is obvious is that many of the tactics used in the First War can clearly be seen in the Boer War, which was fought in South Africa 1899-1902. Complex trench systems, barbed wire, accurate long range rifles, creeping artillery barrages, the mass de-population of the countryside and the extended use of concentration camps: all are to be found in the Boer War.

Many of the famous First War generals cut their teeth there. Major Douglas Haig only just escaped in time from Ladysmith on the last train riddled with bullets. Sir John French was in charge of cavalry. Ian Hamilton who led the disastrous landing in Gallipoli was in the Siege of Ladysmith as was Henry Rawlinson who ended up supervising the evacuation of British troops from Archangel. Winston Churchill was captured in the Boer War when an armoured train was ambushed. Even Winston’s intrepid aunt, Lady Sarah Wilson was a war reporter from inside Mafeking. Artillery spotting from balloons, early radio, war correspondents, stereo photographs, even moving pictures were all there. The press were deeply involved in the Boer War and world opinion was firmly set against the British throughout the world. So when the First War came along, the British establishment took whatever opportunity they could to muzzle the journalists and war photographers. Hence the importance of poets and simple honest uncensored letters back home trying to tell an awful but inconvenient truth. Trench postcards became de rigeur. ‘I am well/unwell etc etc.’ ‘My leg has/has not been shot off.’

Every family has its First War stories. Every family has its casualties. Both my own grandfathers were there, one an infantryman (whose father was born in Lulworth) was stuck round Ypres and became involved with gas warfare and another was on convoys in the North Atlantic. Several uncles were also in the trenches and one in the Motor Machine Gun Corps was wounded three times. Another was captured by the Emden. in the Bay of Bengal. They said very little.

But in the 1960s I met other old soldiers and wrote down their stories.  One man Sgt Grylls from the Devon Regiment, had been one of the first to march through France in August 1914 and heard the first shots of the battle of the Aisne, as bullets rippled through the long grass. He thought they were grass snakes or vipers. Another Devon man, Mr Skelton had been at Gallipoli as a Royal Marine but on the Asian side in February 1915. Eight weeks before the disastrous landing in April. As he said ‘We left our calling card”, which gave the Turks eight weeks to prepare the beaches with wire and machine guns, under German supervision of course.

But however accurate and interesting these soldier’s stories are, it is in the First War poetry that one finds the real nuggets of distilled thought, where words take the place of bullets and shells. Where a line replaces the barbed wire and the awful stench of truth arises from the page. Words hard won and wrought from a front line where consciousness was rescued from shell shock and a maimed body, then brought slowly back to life. Many poets were wounded, and then returned to the front line and were later killed. Quite a few actually relished the fighting.

Their words are increasingly important and popular as their voices speak for other wars as well, and are read by a far wider audience than they could ever have imagined.