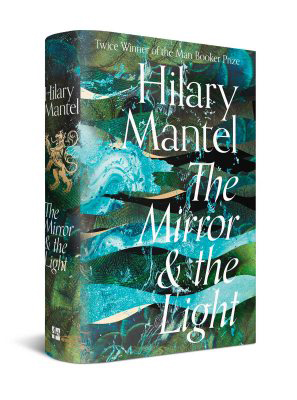 Even a writer’s most avid fan might find 900+ pages a daunting prospect, but for those of us who have already immersed ourselves in the first two books of Hilary Mantel’s Tudor trilogy centred on the life of Thomas Cromwell, ‘Wolf Hall’ and ‘Bring Up The Bodies’, the experience once again registered more sustenance than endurance.
Both of the first two books won the Booker Prize, and for the third to also win it would be unprecedented, but I think few people would bet against it. Historical fiction has become a ubiquitous genre in recent years, and like all forms of writing, its quality varies. Most of it is set earlier than living memory, and faced with the inescapable fact of not having been there, the author must find some way to enter the past – perhaps research, imagination or some predetermined social or political agenda. Writers can guess, construct or manipulate the past, but only a writer with Mantel’s extraordinary combination of investigation, empathy and logic can actually inhabit it.
There are no thees and thous in Mantel’s Tudor England, no big heroic speeches, no gallant knights and forlorn damsels. We find ourselves with the brutal – quite frequently, literally – realities of everyone in England, whatever their wealth or station, having to deal with not just an authoritarian regime, but an authoritarian regime centred on a single man holding absolute, God-like power.
An episode of the sci-fi comedy Red Dwarf contrived a scenario where an entire planet had been constructed from the mind of the least pleasant character, Rimmer, giving physical manifestations to all his phobias, insecurities and prejudices. So England at the time of Thomas Cromwell had to arrange itself around the mind of Henry VIII.
Both Thomas Cromwell and Henry VIII have been demonised for various reasons, Cromwell for doing Henry’s dirty work with merciless efficiency and Henry for throttling and suppressing the Catholic traditions of England. Both images are, of course, gross over-simplifications; like Brexit, like finding our way out of a pandemic, like rescuing the planet, nothing is that simple, however much we would like it to be. Cromwell, having been the principle bagman of Cardinal Wolsey until Henry harasses the Cardinal into dying on the way to his execution, has to deal with the strange, precarious world of Tudor power politics. He has to somehow both appease and control Henry, and far from being simply Henry’s chief of terror, he does sometimes save people or do the best he can to save them, including, in previous books, Sir Thomas More and Thomas Wyatt, the former unsuccessfully, the latter successfully, and in this one, successfully, Henry’s own daughter Mary, forced by oath to declare her own mother’s marriage null and void and therefore disinherit herself.
Cromwell is the son of a Putney blacksmith, a man of extraordinary strength and ferocity, and he grows up in the kind of world where his own mother can drag him off to witness the burning of a ‘heretic’ woman when he is still a toddler. He is a survivor, fluent in several languages and self-trained in political tradecraft across the courts of Europe. Unlike most of Henry’s senior courtiers, he cannot call on small armies of men bound to him by oath and property, or appeal to the great traditions of his family name, or retreat to one of his castles to sulk and recuperate.
I have personal experience of putting historical fiction together; my novel ‘Howell Grange’, set in the mid-nineteenth century and following the fortunes of a northern mine-owning family, was published last year. I know how exhaustive the research needs to be, and how it isn’t enough to see characters as stereotypical cut-outs, or ignore the circumstances and attitudes of their time. Yes, Henry is a tyrant, but he is also genuinely concerned about the succession and the possibilities of plunging the country into chaos, and rightly so, as it turned out; yes, he lusts after Anne Boleyn, but unlike some of his predecessors, he concentrates on consent rather than force. Yes, he disestablishes the monasteries and moves the country significantly away from Rome, but many of them at the time were corrupt to the core and milking the populations around them with what can only be described as protection rackets.
On a ‘spoiler alert’ basis for those whose knowledge of Tudor history is not exhaustive enough to know what ultimately becomes of Thomas Cromwell, I will leave the ending alone, but no-one has to be a historian to relish all the qualities of this book, the sharp and frequently very funny dialogue, the living detail of Tudor food, buildings and pastimes, the unflinching portrayal of the hot, in-your-face undercurrent of everyday violence and death in what some would still term ‘the good old days’ and the understanding it provides of how so much of the world we now inhabit was starting to develop.
One of the 17th century descendants of Thomas Cromwell went by the name of Oliver, the only man in our history to replace rather than serve a monarch, and it is tempting to imagine what kind of trilogy would emerge from the Mantel searchlight remaining with the Cromwells. In the meantime, I can only say that it will take something truly phenomenal to deny this volume a third Booker prize for its author. Whatever the gongs awarded, her now very numerous band of devotees certainly won’t be disappointed.