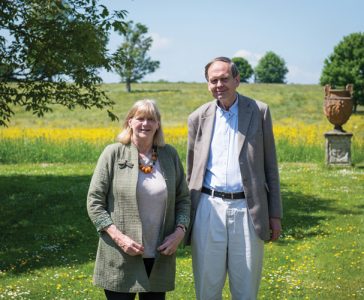 John Montagu kept a diary when he first realised his father was affected by Dementia. Now, more than 30 years later he has published his observations of the challenges faced trying to secure the future of Mapperton against a backdrop of difficult times. He talked to Fergus Byrne.

John Montagu is distracted by kittens. When I arrive to talk with him about his new book, Mapperton Moments, the 11th Earl of Sandwich pops his head out of the window to warn me to be careful coming in the door in case some new arrivals make a break for the dangerous outdoors. We do the ‘shut the door quickly before the kittens get out’ dance as two adorable furry balls of energy tumble over each other trying to climb up his dangling scarf.

As an introduction, it’s a pleasant distraction from the subject of the book I’ve come to talk about. It is a diary covering the last eight and a half years of the life of his father Victor Montagu, Viscount Hinchingbrooke, the 10th Earl of Sandwich. The book covers the years during which the former MP was slowly gripped by Alzheimer’s disease.

Mapperton Moments is a touching and funny—though at times painful—memoir. It not only gives a fascinating insight into the realities of the day-to-day running of a crumbling country manor, but it is also a keen observation of the challenges that accompany the slow decline of a powerful presence. John’s father ‘Hinch’ was a long-standing MP for South Dorset, elected in no less than five general elections. President of the Anti-Common Market League from 1962 to 1984, he was also a member of the Conservative Monday Club which was initially founded to correct a perceived Tory swing toward liberalism. A powerful presence in political life, Victor Montagu also wielded his influence at home, sometimes with devastating consequences. It is the last years and the impact on those closest to him during this time that is laid bare on the pages of his eldest son John’s memoir.

For John, the writing was a therapy that he described in the book as ‘the therapy of the computer’—although the process had begun in longhand and moved through a range of technologies before finally being edited on a computer in recent years. He also described  it as a ‘fairly accurate thermometer’ of how whatever genuine affection he had for his father in the past had been eroded by the time spent dealing with the disease. There were times in the process where he found himself talking to the page. ‘I could only deal with it by writing’ he said. ‘That was a way out of it. It was so exasperating. I thought  I must tell somebody.’

One of the many difficulties included the feeling of alienation. When you live with someone you see changes every day, whereas those that make occasional visits are often blissfully unaware of the frustration and loneliness of dealing with such painful and slow transformation. John explains: ‘There were four or five years where he was ostensibly an ordinary person living an ordinary life. For everybody else, they only had to say one thing like “Hello Hinch”, or whatever, and it would keep him on his traditional route.’

It’s a recurring theme. ‘How little even close friends and family seem to understand’ John writes after complaints that he took his father home too early from a drinks party when it had been at his father’s insistence. Talking about it later his frustration is still raw. ‘That’s the other fascinating thing about looking after the elderly’ he says. ‘It’s the perceptions of being in the home and the perceptions of being outside. You stare at people as if you can’t believe they haven’t realised what’s going on and they’re encouraging you and helping you—they’re the enemy in a sense.’

Day-to-day life at Mapperton was the constant struggle to keep ahead of the elements and included a perpetual redoubling of efforts to find ever more creative ways to fund the maintenance of the estate. However, the other battle was the need to monitor his father’s activities. John recalls Hinch’s insistence on near-daily visits to the bank in Beaminster, on one occasion proffering a £10 note to the cashier and asking her to give him £30. These moments were at times amusing but also endlessly frustrating and painful. They were a long step beyond just forgetting close family names.

Whilst winter frosts meant constant visits from local plumbing company Tolmans, Hinch also developed a habit of pushing down the needle on his gramophone to try to increase the volume requiring repeated visits by an electrician to fix it at a cost of £10 for each call out—a not insubstantial sum in 1987. John remembers wavering between wanting to keep his father fully informed about activities in the family and on the estate and the worry about the ‘ghastly sequences and often irrational thought processes’ that would inevitably follow. Hinch developed a habit of raiding the garden’s honesty box and eventual concern for the welfare of others resulted in him being deprived of his car. Occasional falls and an insistence that he hadn’t been to places for 30 years—although he may have been there a week previously—left giant holes in conversations that once might have been enlightening and pleasant. Such conversations became ‘not occasional but continuous’ writes John.

As decline became less gradual there were moments where hiding behind doors rather than engaging with his father became the easier choice. Hinch took to drinking vodka in the morning, going to bed after lunch and then waking at dinner time and demanding breakfast. ‘He was rather one to glare at you when you went into the room’ recalls John, although he remembers that  the sweetest smile sometimes replaced the glare. ‘They would sometimes cross over and you would get both of them in the same day—fretting over the marmalade or something. There were times when we couldn’t bear to sit in the dining room. Then you’d start hiding. That is the reality. I was never frightened or anything like that, but I certainly would avoid a lot. I wouldn’t want the confrontation. That’s where Caroline comes in because she was able to stop him.’

The daily grind of trying to get him back to bed after he had risen at 4 or 5 in the morning and then not getting back to sleep was endlessly wearing . In time John confides desperate descriptions to his diary with the observation that they may be a little over the top ‘but you sometimes have to look over the top to see things in perspective.’

Rest eventually came with the first visit to a care home in the New Forest. John writes about how the journey included mile after mile of making up answers to the “where are we going” question, ‘like the witches in fairy tales, coaxing the children deeper into the wilderness.’ Once there Hinch packed his suitcase daily explaining to staff that he had enjoyed a lovely holiday but was ready to go home now.

Anyone who has experienced the mental agony of dealing with a loved one with Alzheimer’s will recognise the conflicting emotions that come with the experience. Residual guilt at the resentment of the person one loved is sometimes overcome by the conviction that the one suffering from the disease is not the person they once knew.

John Montagu’s reflections show the deep warmth and compassion of the writer and at times affection for the man that played such a significant role in his life. He tells me about skiing holidays as a young boy and exciting trips such as visiting East Germany with his father and the MP Richard Crossman. ‘We visited the parliament and they all clapped the English MPs coming for the first time’ he recalls and mentions the thrill of passing through the infamous ‘Checkpoint Charlie’. These are memories that were perhaps suppressed by the years that followed—the politics that John rarely agreed with and the slow descent into Alzheimer’s. He describes the discipline of recording those final years as a valuable exercise that created a time when he could quietly remember his father.

Mapperton Moments records defining years in a relationship, but as John explains in the introduction, the writing process was also a means of working out what inheritance means ‘and the frustration it can involve.’ The book offers an insight into that quandary on many levels. The exasperation of dealing with the outside perception of chattels or political legacy, versus the reality that the day-to-day difficulties that life throws at everyone are painful and frustrating no matter where you are in society. To say that Mapperton Moments is a touching memoir may be doing it a disservice. It is so much more than that.