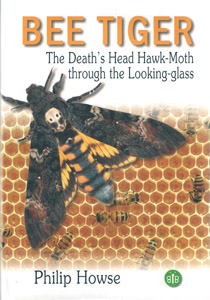 Burton Bradstock based entomologist, Philip Howse, investigates the hawk-moth and it’s ability to use mimicry and deception to trick predators. James Crowden has been reading his latest book.

This is a remarkable book by a remarkable man. Bee Tiger has nothing directly to do with tigers but in a very subtle way it does. Mimicry and deception are at the very core of this book. The Bee Tiger is a very clever moth and Professor Philip Howse has delved into its secrets. The subtitle of the book is, The Death’s Head Hawk-Moth through the looking glass. Already this phrase conjures up images of Alice in Wonderland. And that is not out of place.
The Bee Tiger moth is so named because of its yellow and black-striped abdomen and its silent entry into a hive of unwary bees to get their honey undetected. Which is quite a feat when we consider bees to be very clever, alert and hard working. All those sweet productive hives dripping with honey. So the moth is a bit of sponger. One of nature’s cads, a bit like the cuckoo. But you have to admire its gall. The other name that it is known by ‘Death’s head hawk moth’ is more to do with our own fears and superstitions. We fear death and yet we perceive signs of death even in a moth which has sinister skull like markings on its upper thorax.
The Bee Tiger moth comes from Africa and is often found on mainland Europe, but is a visitor to our shores in the summer months. The moth’s elusive markings have evolved to deceive its predators which are in the main birds and bats. The moth is very brave to enter bee hives and steal honey, and to get away with it without being stung. So in a sense it is a double agent, and a very clever one at that.
In this short book Philip Howse explores not only the magical way in which this moth operates in the natural world, but he explores the role of mimicry and deception in survival, as well as our own superstitions linked to it. In Germany, for instance, the moth was used as a talisman in the late Middle Ages by farmers who nailed it to stable doors to keep away evil spirits.
But Philip is a fine entomologist and always wants to get to the bottom of things. Here we are dealing with evolution in a Darwinian sense, where every aspect of moth’s design and camouflage has a role to play. He quotes Miriam Rothschild and her proposition that birds who live off insects will find yellow and black markings intimidating, as they trigger fears of hornets and giant bees. Then again Philip quotes the work of Nikolas Tinbergen the Oxford ethologist who worked on animal senses and proved that birds have blinkered vision. They see the detail first and then run a mile without stopping to think that it is only a moth. Mimicry has worked. The moth has survived.
Indeed, mimicry is also the essence of military camouflage. But it does not stop there. There is sound. The adults emit a squeak when alarmed, made by expelling air through its proboscis (tongue), which has a structure that vibrates like the reed of a wind instrument. The species is nocturnal.
Philip Howse takes us on an incredible journey into the meaning of skulls and art, potatoes and honey, superstition, bats, birds and mirrors. The doors of perception are flung wide open. Our own culture is intimately woven into this remarkable story. The book is a little gem and a fantastic read.