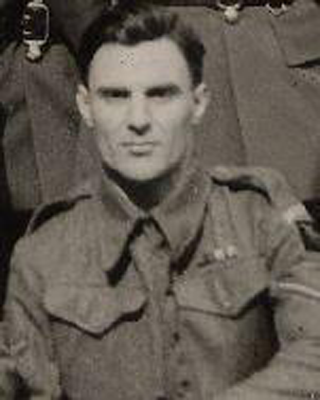 Christopher Jary remembers three British battalions: the Devons, Hampshires and Dorsets in the invasion of Sicily in 1943. His latest book Roy’s Boys, nicknamed after Brigadier Roy Urquhart DSO, draws on the testimony of scores of veterans.

On 2nd March, in Auckland, New Zealand, the Dorset Regiment’s most distinguished veteran of the Second World War will celebrate his 100th birthday. Having enlisted as a boy soldier in 1936 and served in India before the war, Denis Bounsall fought throughout the Siege of Malta. His Brigade then led the Allied landings in Sicily, Italy and on D-Day. Miraculously, Denis survived the three-month campaign in Normandy, the advance through Belgium and the battle around Arnhem before the Brigade was finally rested and returned to England.
Denis led a charmed life which, in the course of his duties as a stretcher-bearer, he risked countless times in battle after bloody battle. And now, on the day he makes his century, he will receive a birthday present from Dorset that commemorates and celebrates his exceptional career as a soldier. He does not know it yet but he will receive the first copy of a book concerning the invasion of Sicily in 1943 by the three West country battalions that made up 231 Brigade – otherwise known as the Malta Brigade and included the 1st Dorsets, the 1st Hampshires and the 2nd Devons.
Their story began on Malta, when the three battalions first came together. Churchill had seen the potential of Malta, which he called “the unsinkable aircraft carrier”, to sink enemy shipping crossing the Mediterranean to supply Italian and German troops in North Africa. Hitler ordered that Malta should be “neutralised”. For the tiny garrison and defenceless population, this meant blockade, starvation and the heaviest bombing in history. Denis and his friends spent 34 months dodging the bombs, enduring starvation, defending the airfields, ports and coastline, repairing the runways and preparing for imminent invasion. It never came.
Impressed by the Malta Brigade, Monty recruited them to his 8th Army and sent them to Egypt, under the command of Brigadier Roy Urquhart (who later won fame at Arnhem), to train to lead the invasion of Sicily. The first day of that invasion saw the greatest amphibious landing the world has ever seen—it surpassed that of D-Day! First ashore of the brigade were C Company of the 1st Dorsets, led by Captain Charles Martin from Rampisham. At first they met unenthusiastic Italian home defence troops but soon they encountered Germans in the shape of the Herman Goering Division and their war changed dramatically. The Germans fought a fierce rear-guard action across the island, defending every possible hill. They fought with skill and tenacity in terrain which strongly favoured the defender. For the men of the Brigade, Sicily was a succession of tiring advances through choking white dust kicked up by the vehicles and marching men under the blazing Sicilian August sun. The capture of hill towns on their way—Vizzini, Agira and Regalbuto in the shadow of Mount Etna—cost casualties heavier than those suffered by the infantry at Kohima and not far short of those suffered later in Normandy.
In one of his first battles 22-year-old Denis Bounsall worked out in the open on an exposed road under heavy shell, mortar and machine gun fire, rescuing and tending wounded soldiers. A couple of days later he single-handedly carried another wounded man back from a patrol, evading German soldiers to bring him back to safety. In recognition of these feats he was later to be awarded the Distinguished Conduct Medal—next down from a Victoria Cross.
After a gruelling five and a half-week campaign, German forces were forced out of Sicily by 17th August 1943. The Malta Brigade now rested by the sea, caught malaria and prepared to invade Italy. On 8th September they landed on the toe of Italy – ahead of the 8th Army’s advance – and helped to speed their way north. Unlike the invasion of Sicily which had been planned with great care and thoroughness, the landing in Italy was planned at the last moment and went very wrong. It was to the great credit of the Brigade that, once ashore, they rose to the challenge, imposed order on chaos and won through. Their story in Sicily and Italy is told in the newly published Roy’s Boys.
Monty told them he would take them wherever he went and, when they all groaned, he replied that this might mean England. It did. In November the Brigade returned to the UK to train to lead the Normandy landings. At 0730 on 6th June 1944 the 1st Hampshires and 1st Dorsets landed side by side on Gold Beach near Le Hamel. It became an infantry battle to dislodge the very determined German defenders, and Charles Martin, by now Second-in Command of the 1st Hampshires, was killed. By the end of the day the Dorsets had taken all their objectives, the Hampshires had taken most of theirs and the Devons had taken their primary one and they had grabbed a viable beach-head near Arromanches.
March 1st sees the publication of Roy’s Boys, telling the story of the invasion of Sicily. It completes a trilogy about the Malta Brigade’s story. The other two books, Yells, Bells & Smells – covering Malta – and D-Day Spearhead Brigade – covering D-Day, have been re-issued in matching editions also on March 1st. Written by Christopher Jary of Frampton, they are the work of a team of researchers from the Keep Military Museum in Dorchester and the Royal Hampshire Regiment Museum in Winchester. All have personal or family links with one or more of the three regiments and all are volunteers at one or other of the two museums which together represent the Devonshire, Hampshire and Dorset Regiments. The stories are told through the eyes of the soldiers who were there – often in their own words – and are full of maps and photographs, many them published for the first time. Publication of the completed Trilogy has been brought forward to enable Denis Bounsall to get the first set of books. Let’s hope he likes them!

These books are available from the Keep Military Museum bookshop (Keepmilitary museum.org/shop). They cost £15 each, including postage, but the whole trilogy can be bought for £36 including postage.