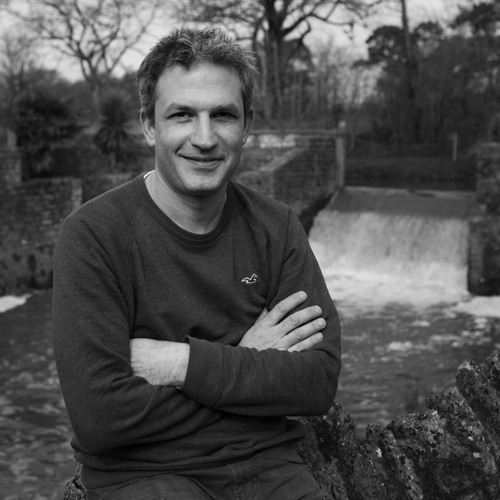 ‘I was born in Boston, Lincolnshire, in 1971, but I don’t really feel like I’m from anywhere in England. My father was in the Royal Air Force so we bounced from RAF base to RAF base throughout my childhood. I thought of it as normal but in retrospect, it was quite a weird life because we were in a constant state of motion. I don’t remember being attached to places, or possessions, because our lives were always being boxed up and shipped three months ahead of us. Maybe that’s why I’ve always been able to live out of a rucksack, and why friends remark I’m always wearing the same set of clothes. If I ever fight with my wife, it’s over packing, as I can do it (badly, she says) in less than three minutes.  As children, we lived on bases all over the UK, as well as in Germany where my dad was on an exchange programme with the Luftwaffe, and Maryland where he flew US Naval jets like in Top Gun. He was a test pilot. His speciality was night flying. This was in the Seventies when jets had quite a high casualty rate; over a third of his graduation class died in flying accidents over the years. He left the RAF when I was ten and joined what became British Aerospace. My father was also a scientist. He invented the modern way of flying jets at night—a helmet-mounted image-intensifier system called Cat’s Eyes which remains the industry standard. I remember when he appeared with his invention on the BBC TV programme, Tomorrow’s World. My father still works in the aviation industry but is based in America these days.

After the RAF, my family settled in Kent, where my mother worked as a school teacher. I went to a local school there, then got a scholarship to board at Lancing College, near Brighton, when I was 13. I’ve always had a lot of hobbies, slightly obsessive ones, which usually tend towards the slightly tech-y. When I was small, I designed rabbit traps, which were far too complicated to ever catch anything. When I was at Lancing, I got quite good at home brewing. I sold a lot of homebrew, like three, four gallons a week. Even the teachers were buying it. I then left to study classics at Oxford, where I joined the shooting team and my hobby switched to making bullets. You start with a mould, and pour in molten lead, then clamp it shut. That’s the bullet. You resize a used brass casing, measure in some gunpowder, put the bullet in, crimp it. It’s quite stressful. If you put too much powder in, the gases won’t be able to come out fast enough and the gun will blow up. We never had any accidents at the club, but I saw a guy shoot his finger off like that.

Oxford was a lot of fun. Academically I never quite excelled in the Ancient Greek I signed up for, but I enjoyed Philosophy and Latin, even if it’s never had any impact on my future. Then a job in London with an ad agency, until I started a business called JohnHenry making record covers on an early Macintosh computer. Our first band was called Earthling, an EMI signing, then we got the Prodigy, who became our first big clients. We started doing their T-shirts and ended up naming a few of their records, fifty quid per name. Working in the music industry was carnage: there wasn’t a lot of money, but it was a good laugh.

We gradually shifted from record covers to corporate work, doing TV graphics and CD-ROMs. When the internet came along in 1997, it was a real Wild West. Everyone was blagging their way through. A client would ask if we could do something and we’d think: yeah, why not? They couldn’t ask to see what we’d done before because no-one had a track record. It was interesting, but London wasn’t for me. We sold the company in 2009, on a five-year buyout, which was hard. I was having to spend more time in London than I liked while my family were in Dorset. I was also having to juggle this pressure with my wife’s commitment—she’s often overseas in her work as a journalist. During that buyout, I realised how rooted we really were to Dorset. Her parents and sisters, all local, managed to help us keep the family feeling secure as my wife and I came and went. We perfected ‘the tag marriage’—catching each other at the door as one half arrives and the other leaves. We have two young sons for whom Dorset has only ever been home.

It’s very difficult to leave a company you’ve set up; it’s emotional. I didn’t feel I could just walk out on my colleagues because I’d got a better job in the same industry. Besides, I didn’t want to get on the weekly Axminster-London train line ever again. I thought about starting a brick-oven business, because I’ve made a few in my time for family as well as friends. But I couldn’t make the numbers work. Fortunately, I was offered a job that was beautifully vague, although quite a lot further from Bridport than any of us expected. It was working in Kathmandu and Mongolia, running a cashmere weaving business, renovating Sir Edmund Hillary’s house in the Himalayas, and building a football pitch for Sherpas into the side of a mountain. It was baffling, eccentric and amusing. Each school holidays, we decamped with the whole family. It was never going to be long-term but it was a perfect filler, and a proper adventure my children won’t easily forget. It was during that slightly odd-ball year that I thought about setting up the food business, OutdoorFood, which I now run out of a converted mill in Pymore.

The idea has been brewing since a trip I made to Greenland: a two-week, self-supported hiking expedition with my friend, who is a mountain leader. I ended up making my own dried food because I couldn’t find any hiking rations I liked. It all tasted artificial, cheap, and unhealthy. So I started experimenting with recipes, using a home dehydrator. Fish from Bridport. Vegetables from Bridget’s Market. Lamb from my father-in-law in Broadwindsor. No additives. No palm oil. All natural ingredients. It was a new hobby to obsess over, which got more interesting when I saw how shifts in dehydration technology could change the market. I fiddled with the pipework in the house. I converted part of our kitchen, diverted hot water pipes from our bathroom, and built a prototype commercial dryer out of wood and wire. The whole camping food industry uses freeze-drying technology, which is a different process, relying on vacuum chambers rather than ovens. No one else was making dehydrated meals, which is strange because in simple terms, the process is something like 12,000 years old. Eventually I managed to work out the challenges, and launched FIREPOT—a healthy camping meal in a bag you just add boiling water to. We launched in March 2017 in a barn in Chideock. In January, I moved into bigger premises in a former mill outside Bridport. Our food has already been to the top of Everest and the South Pole.

I married my wife, Sophy, in Stoke Abbott in 2000. Her parents had a farm there at the time. In 2001, we found a place in Marshwood, swapping our one-bed flat in London for a four-bed semi in Dorset with a spectacular view of the Vale. We bought our current home in Ryall in 2009. A total ruin, we couldn’t move in for two years—we camped in the field when my in-laws got fed up with our menagerie—but now it’s home. I spend most weekends taxi-driving the children to various activities around West Dorset. Sophy is coming to the end of a three-year book project in Siberia, so the new business has also allowed me to be flexible around her absences when she isn’t taking us all with her. All of us love travelling, which is perhaps what an RAF childhood gave me at the beginning.’