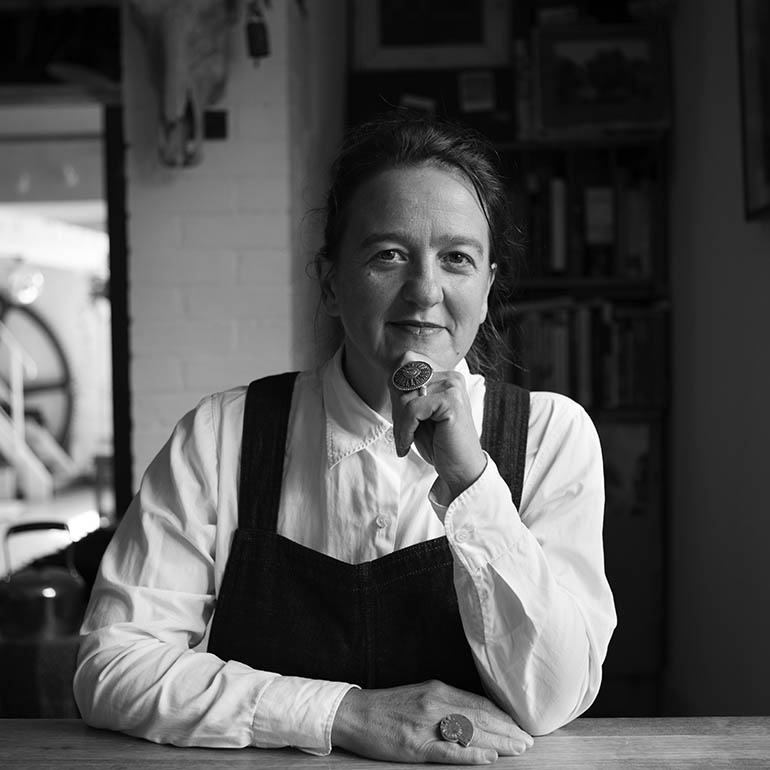 ‘I was born in Whitehalk in Brighton but spent most of my childhood in Patcham, close to the Sussex Downs. My mother is English, my Dad Hungarian. When war broke out in 1939 his family faced a terrible decision: their oldest son would remain in Hungary, but they would get their youngest out of the country. At the age of nineteen he was moving across war ravaged Europe, sometimes in camps for prisoners of war with other displaced people. He saw nothing of his family for many years, during which time both his parents died. His first trip back wasn’t till the 70s. I was terrified he wouldn’t come back from behind the “Iron Curtain”, which in my imagination was a real metal barrier he needed to pass through. That family decision to send away a son with the possibility of never seeing him again must have been dreadful. I am mindful that many people face such decisions in the world’s current migrant crisis.

My parents met at the engineering factory where they both worked, my Dad 20 years older than my Mum. Within 2 weeks of meeting him she’d broken off her existing engagement, and they married. When I was about five my Dad went to work on the oil rigs in Saudi, well paid years which enabled them to buy their first home. My Mum was now becoming a successful businesswoman sending personnel out to the rigs, and became the main breadwinner of the family. My Nan lived with us and was there for my brother and I—she always held the family together. After my Grandad was discharged out of the merchant navy with ill health, they worked in service; Nan was the housekeeper and he was the butler, but he kept getting the sack for being argumentative. My Nan was resilient and faced the challenges of an itinerant life—two young kids to look after as well as her ailing husband. I have some strong matriarchal roles in my family.

I think I knew from an early age I wanted to be an artist. At the age of 11 I asked to go to boarding school. I loved it, despite it being a slightly freaky all-girl catholic convent school. I had a supportive art teacher, and my time in the art room gave me the solitude I needed to survive living communally. From there I went to an extremely progressive experimental sixth form boarding school. Turns out it was where a lot of creative London intelligentsia sent their kids—their parents were poets, performance artists or produced operas—a completely different cultural and political world. Some sixth formers set up Kids against the Bomb—the youth wing of CND. I went to philosophy lessons with the headmaster who set about convincing me that God didn’t actually exist. I was introduced to great writers like DH Lawrence, Harold Pinter, Jane Austin, Sylvia Plath and TS Eliot, and as a result probably had my head in a book for the next 10 years, finding reading a means of escape to another world, in the same way that as a child I loved the sea’s horizon and the space to imagine what lay beyond.

About this time I first went to galleries, the National and the Tate. Seeing the Rothko room was a significant moment for me, realising that an abstract picture could be profoundly spiritual. The experience gave me even more appetite to discover what art might be. My work had become my home.

I went to art school in Newcastle, which is all smartened up now but then it was a gritty, bleak but beautiful place, with bigger landscapes and steely skies. I loved swimming in the freezing North Sea, the colder the better. From there I went to London, via the Royal College of Art. Whilst I didn’t find the teaching there particularly inspiring, I made some long lasting friendships including Alex, my husband. We met there, and have been together for 27 years—although we only married 3 years ago. The RCA was a very formative time career-wise. From my graduation show in 1990 I was selected to show at the Serpentine Gallery, and won the Barclays Young Artist of the Year Award, which led on to my first gallery quite soon after; I’ve been making and showing my work both here and abroad ever since. There was great appetite for young British artists at that time, despite my tutors questioning why I worked so hard, given I was just going to get married and have children. I teach now; I run the MA Drawing Course at the University of the Arts London, and I can’t ever imagine saying something like that to a student!

Ten years after meeting, Alex and I had our son Frank. When he was quite little we lived in Los Angeles for a couple of years. We had loved previous trips to the States, the amazing landscapes of the desert and mountains, road trips in Utah, hiking the Grand Canyon and the mountains of Colorado, and also loved the city of Los Angeles. So we decided to try living there, but when in time Frank began to pick up an American accent I thought it was time to come home. We lived in Shoreditch for many years, but eventually the area changed from being an artist-friendly, alternative environment to the night-club capital of the world. It didn’t seem right for us any more, with Frank growing up, so we sold up. We needed an adventure so we went travelling in South America, from Buenos Aires to Patagonia, Chile, Peru and Bolivia for 6 months, home-tutoring our eight year old son en route. Just before we were about to head off into the Amazon jungle in Peru I found out I’d won a commission to create a work for a ceiling of the Natural History Museum, for the Darwin Bicentenary. That meant we had to come back.

Some good friends at Uplyme put us up for that summer when we didn’t have a home—or a plan—and during that time we decided not to go back to London. Partly as a result of seeing people with simpler, more rural lives on our trip we started looking for somewhere to live in the West Country. After a lengthy and uncertain period we moved into the Mill here at Luppitt, and much to Frank’s relief he could settle; he got a place at Colyton Grammar School and embraced life here.

I make work and write about how we relate to the natural world, but it’s very different to living in a rural place—there are so many challenges to it, but I am so happy that living here has been a part of my life. I’ve also come to realise how profound the prejudices are in Britain between the urban and the rural—going both ways. I think it’s as significant as the barriers between rich and poor, north and south, and various other cultural or political divides.

Living in the Blackdowns I feel more at home than anywhere I’ve lived before. I went to Transylvania a few years ago for an art project. Out the train window I saw men and women scything meadows in the early dawn light, in a pre-industrialised agricultural landscape a bit like the Blackdown Hills. Turns out my Dad spent his childhood in Transylvania, something I didn’t know till I went there. My Mum’s happiest time as a girl was when they lived at Wrington in Somerset, at Barley Wood. Sometimes I think these things helped me connect personally to the deeply rural landscape I live in now. The Blackdowns are a beautiful, wild, hidden place, full of resilient folk. It’s been a great place for us to live out our time as a family. Frank has finished school now and is going off to university to study medicine, so it’s nearly time for us to think about what’s next.’