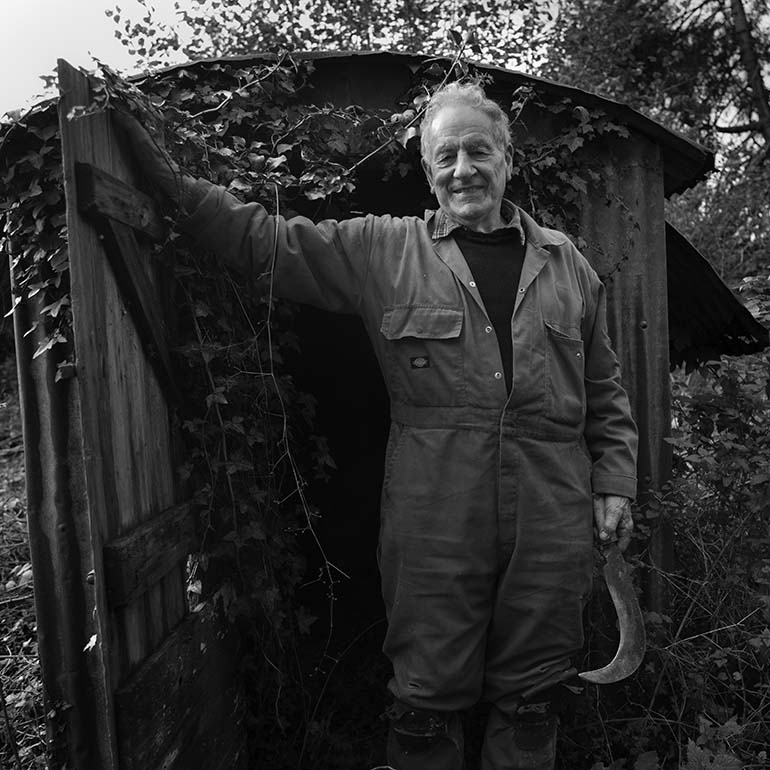 ‘My family’s from Wool; I was born and brought up in the village, and still live there. I’m now the sixth generation of hurdle-makers, a trade we can trace back to the 19th century in our family. Right from when we were quite young we went to work in the wood for Father, who was spar-making for thatchers. He’d trained as a hurdle-maker, and then the First World War came along and he never went back to it. He wanted a house, so went to work on the railway, but he carried on spar-making part time for the rest of his life. So we were always in the wood as youngsters; my brothers are all gone now bar one, who’s in a home, but it was my eldest brother that taught me hurdle-making.

I went to school locally, worked on the farm, and then did my National Service in the Army with the Dorset Regiment. I was a lorry driver for a bit, and then we got married, so I needed some extra money and went back to the woods part time. That was 50-odd years ago now. About 40 years ago I met Don Davis, who was hurdle-making here; he was heading towards retirement, was good enough to let me have some of his woods, and little by little I’ve built it up from there. I use about four acres of hazel coppice a year on a seven year cycle, so I’m looking for about 28 acres in all.

When I started it was a lot of sheep hurdles. Melplash Show had some most years, as did Frome Cheese Show, although when we joined Europe that stopped—they weren’t allowed to use wood apparently. But a lot of farmers were still using them for lambing pens, and would buy a few dozen every year. And now it’s pretty much all garden hurdles of various sizes. It’s gone from a century or so ago when every village, where there were sheep, would have had several hurdle-makers (in 1885 in Wool alone there were 11 recorded), to now when it’s just me making garden hurdles and trying to compete with the imports from Eastern Europe. In the days when sheep were folded every night across the arable ground, and grazed on root crops in the winter, it took 15 dozen hurdles to pen them in the one acre fold. Every morning the shepherds would have to move three-quarters of those hurdles to make the next night’s fold. That’s why there’s what we call a twilly hole near the top of the hurdle to allow the shepherd to put a bar through 3 or 4 hurdles at a time and carry them all on his back. One of the oldest country crafts, the wattle hurdle was also used for building walls, so called wattle and daub, often found in mediaeval buildings, and one was found buried in the peat on the Somerset levels, laid flat as a walkway over wet ground, and thought to be 5,000 years old.

Rotational hazel coppicing every seven years has huge environmental benefits for a piece of woodland. On the areas I’ve recently cut, the wildflowers that come through in the spring have to be seen to be believed. Dorset Environmental Group recently surveyed one of my copses and found 47 plant species thriving. This morning, a butterfly settled on the white side of a hurdle with the sun on it, and that’s not bad for late October. However, if the hazel’s not cut for 10 years, or less now it seems to be growing faster, it becomes overstood, and useless for hurdle making. Nor is it ideal for firewood; it gets so tangled in the top branches, it’s very hard work to cut, and will warm you up four or five times before you get to burn it. So it will be a great loss if the hazel’s not coppiced, but no one seems to care. Now we’ve got Ash Dieback disease through imported saplings from coming in from Poland via Holland, and I think that happened because nobody, especially the authorities, cared about the consequences. Although, we sent some hurdles to the USA, and they burnt them on the dockside because they hadn’t been treated.

My working day in the woods starts at about 7.30am, rain or shine. One day a week I’ll just cut rods for a few hours, and leave them to pitch for a few days so they’re not too sappy to work, and I’ve always got a few strings to work with that I cut previously. I’ll work in one curf, about half an acre, which will last me a few weeks. I start with the flake, usually a nice bit of ash pole, cut in half lengthways, with nine holes in it for a garden hurdle, into which the uprights or zales are fitted. The flake has a slight bend in it so that when the new hurdles are stacked they’ll tighten up as they dry out and straighten. The two end zales are round, and the seven through the middle are split. Then I’ll start weaving in the twillies, the smaller round rods at the bottom, which are bound in so the hurdle doesn’t fall to bits. The larger rods through the middle of the hurdle, or rixon, are all split, and we’ll cleave enough to make the hurdle. That’s done using a hook that’s never been sharpened, which, once started into the rod, can be worked all the way along its length by a combination of pulling and twisting the hook, splitting the wood as it goes. It looks a bit dangerous, as you’re working towards the hand you’re holding the rod with, but I don’t push it. It’s easy when you’ve done one before. Once upon a time you’d reckon to make 8 sheep hurdles a day, but that’s going some, and hurdles didn’t need to be as tidy as they do today. These days if I make two and a half six-foot hurdles that’s a good day’s work, and it’s a lot of wood to shift. In the summer, when the sun’s out it does get very warm, but the wood works nicely. In the winter, if the wood’s frozen I’ll light a fire and lean the rods on a frame over it just to take the frost out of it.

I’m doing exactly the same as my father and grandfather did all those years ago, nothing’s changed. I’ve never bought a tool in my life. The hooks I use, that one was my father’s, that one Don Davis’s, and that one Frank Churchill’s, and they are sharp. I put my own handles in, using a bit of withy. What has changed of course is partly because sheep farmers have little need for wattle hurdles now, and partly down to competition from Eastern Europe. My son Steve was working with me after training as a quantity surveyor—he’s a good hurdle-maker. But 10 or 12 years ago the cheap imported hurdles started flooding in, nailed together and cut with a band saw, so they don’t last. We lost business from seven companies in three months, and these were lorry loads of hurdles. It’s the same with spar-makers. They’re struggling now for the same reasons, which is a great shame.

Steve, with a mortgage to pay, had to go back to quantity surveying, but he hopes to come back to hurdle-making if times get better. So I’m carrying on with that in mind. I go to most of the shows to promote my work, and the variety of customers I supply makes it more interesting. I supplied some hurdles for the recent film Far from the Madding Crowd, and the New Hardy Players in their production of The Woodlanders. It’s a way of life Thomas Hardy must have appreciated.’