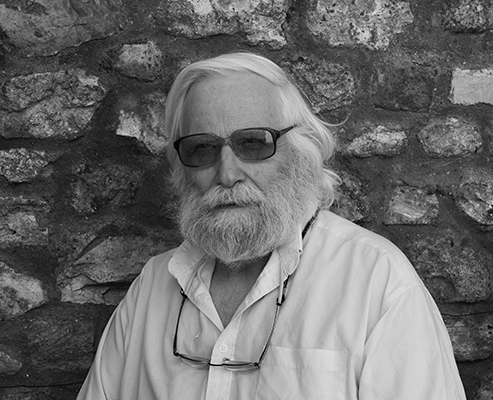 Julia Mear met David Starr at his home in Axminster. This is his story.

‘I was born in Nelson Hospital in Merton Park, Surrey on 4th August 1936. My mother, Bertha Eleanor Agnes White and father, William met in Clapham, their families all knew each other. Mum was dad’s second wife. His first wife was mum’s twin sister who had died aged 29. We were all very close with lots of extended family around us. Although I was born partially sighted, I led a normal and happy childhood, of course then the war came along. I remember mother and father talking about it and the effect it would have on the neighbourhood, I was only 3, but I remember it well as I couldn’t understand what they meant. It was the phoney war for a while but it soon became very real and in September 1940 we had a JU88 bomber crash into the side of our house. Luckily we were in the shelter and the couple and baby, who were in our house at the time managed to get out. Everything went up in flames, I got wrapped up in a blanket and we spent that night in hospital. The next few nights we slept in the underground stations. Mum and I moved to Lymington to stay with Mum’s cousin, Aunt Dolly and her daughter Dorothy Page, who actually lives in Axminster now. Dad stayed in London, he was a gas mains man and very useful during the war. I started school there and also did my first audition for pantomime and got the part of Dick Whittington’s cat. I never actually performed as I fell ill, so it wasn’t until 75 years later that I got the chance of being in a pantomime again—just this year actually, in Axminster’s fine production of Puss in Boots!

I remember going to hospital to get tested for my first pair of spectacles when I was just 18 months old and my earliest memory of realising I might be different to other children was when I was almost 4 years old. Neighbouring children were talking to me over the fence and asked why I held on to the fence when I walked. Of course I replied, ‘so I can see’, and they were surprised to learn that I couldn’t.

We moved back to Raines Park in London and at 8 years old I was sent to a School for the Blind in Upton, Nottinghamshire, a big manor house, now the Horological Society headquarters. I cried the first few nights but I soon settled in. I had a fantastic teacher there, Miss Davis; some things she taught me have stuck forever and helped with a degree course I took later. She was in tears seeing us all off at the station when we were transferred to Dorton House in Buckinghamshire.

I got fed up with boarding school and conned my specialist into letting me go to a partially-sighted school where I went from a very average pupil to top of the class! I later managed to get myself into Wandsworth School of Building from 14-16 years of age. They found I couldn’t do much there really, because of my sight. However, I was pretty good at the practical side—I can still lay bricks today.

Then I came down to Torquay to a RNIB rehabilitation centre for a three month assessment course where I found I could drink in local pubs under age as I looked much older. I went into the engineering side of things which led to a course in Letchworth and I then got a job with GH Zeals in Merton as a capstan lathe operator; manufacturing thermometers and other scientific instruments. It was during this time I met my wife.

I almost met my wife, Jean Hills, in 1948; she had infantile retinoblastoma and was totally blind. I had left Dorton House in the July and she started there in September. We actually met about 10 years later when I did some voluntary work for young and blind people in Wimbledon. Her mother didn’t know what to do with her so she was on our day trip. We met on the bus and got talking. I was 22 and she was 16. Later she came to the club meeting and we all said we’d write to her—well, I could write brail so I was the one who wrote to her. When she was back from school over Christmas I arranged to see her. She came to visit and we found we were both interested in classical music, by the time she went back in the Spring we had decided to get married. Mother wept, saying she thought I would have found someone to look after me, not the other way around. But everyone was happy for us both. Jean was very much the outsider in her family and one of four siblings. They didn’t really know how to cope with her blindness.

We got married in Surrey in 1961; we lived at my mother’s for a while and then moved to Harlow, Essex in October 1965, I was now working for BOC, British Oxygen Company, making medical equipment. We already had two sons by then—Andy, who was born partially sighted but is totally blind now, and Christopher who has perfect sight. Our third son Ian was born in 1966—he is partially sighted with infantile retinoblastoma. The Health Visitor would often bring new mothers round to see Jean to learn how to change nappies as she did it so well. I was made medically redundant at the age of 42 as I was getting extreme migraines. I got my teaching certificate and went on to teach people with learning difficulties.

I lost my wife to malignant melanoma in 1984. Jean was an amazing woman. She was the only totally blind person to show her own dogs at Crufts and at just 18 years old. We had always talked about moving to the West of England when the boys left school. We were country kids at heart as our boarding schools had always been in the countryside. Whenever I had visited Devon or Dorset I felt immediately at home.

Andy now lives with me, he works in Exeter for the Department of Working Pensions, loves music and plays anything you can blow—he is a great recorder player. Christopher lives in Hitchin, Hertfordshire, he works in finance and is married to Mary, and I have two grandchildren. Ian lives in Essex, working for Customs & Excise, but always popping down to see if Dad’s alright. It took him just two years to get a degree in anthropology and osteology, and he’s a keen musician.

I had been coming to Axminster to visit for the last 28 years or so. After Jean died, I always stayed with my second cousin, Dorothy, who now lives in Axminster as well, but at the time ran the Queen Victoria pub in Lyme Regis with her cousin Pam, before both of them retired. It was a low time in my life, having lost Jean. I just fell in love with the place though—I would get off the train at Axminster and go exploring. Andy started coming with me to get away from London, after the underground bombings, he was on Liverpool Station when it happened. Andy and I moved here in 2011 and we already knew the town quite well. You can probably guess I am quite gregarious. I started work straight away as a volunteer for the museum. I joined the committee of the museum and the Arts Café, and I am a member of the TIC (Tourist Information Committee). I’ve attended local art classes with Karl Taylor and sometimes I exhibit my work. Of course, I also thought I’d like to join the dramatic society—I’d previously done some comedy sketches with some friends and gone around old peoples’ homes as the entertainment.

We feel so lucky living here; we have all the amenities around us that we need. Andy’s guide dog, Timber knows his way around just about everywhere. We all walk down to the station in the mornings—Andy and Timber catch the train to work—I just go for the walk. I recently did a sponsored walk from Lyme to Axminster for the TIC—I had to be hoicked over a few styles but I did it. I feel I have managed to immerse myself into local life quite well.’