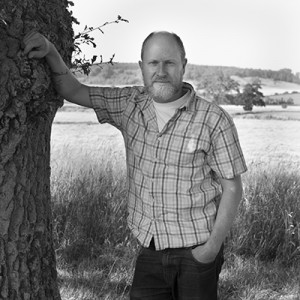 Robin Mills went to Somerton, Somerset, to meet Gavin Pretor-Pinney. This is his story.

“I was born and brought up in London, but my father is from here in Somerset, and my mother’s from the States, from New York. In the 1970s, they built the house they now live in, so from around that time we would come down here regularly for weekends and holidays. So I’ve always had a connection to this area, and the Pinney family are from West Dorset. I have an older brother, Giles, and a sister, Jenny, who also live locally.

I studied all sciences at Westminster School. I was a bit of a science nerd. I got into Oxford to read philosophy and physics, but ended up changing to philosophy and psychology. It was the philosophy that I enjoyed, but you can’t do that on its own at Oxford, nor was it particularly vocational, so afterwards I went to Central St Martins in London to do an MA in graphic design. I went from studying the sciences to the arts, which felt particularly enriching as I had no arts background—no O level or A level art, nor a foundation course. This distinguished me from the others on the course. At the end, the tutors confessed that they couldn’t think what sort of job would be suitable for me. They said I’d have to go and create one of my own. I didn’t have any clear idea of what I’d end up doing; I’ve always just pursued what interested me, and never had a five year plan. Sometimes I think life would have been a lot easier if I had.

My first job was the launch art director for a newspaper/magazine called the Modern Review, which was founded by columnist Julie Birchill and writer Toby Young. I worked there for its first year. After that, I was freelancing as a designer, when a friend from school, Tom Hodgkinson, asked if I’d like to help out with his idea for a magazine, called the Idler. We started that in 1993, so this year is the publication’s 20th anniversary. I art directed it, he edited it, but as a two man team we both did a lot of everything. First we ran it from my flat, until my then girlfriend had had enough and said we needed to find somewhere else. So we did it from Tom’s flat until his girlfriend said the same. After a couple of years we started producing it from the offices of the Guardian. We’d attracted a bit of a cult following which interested the newspaper. The Idler is about the importance of downtime, about how relaxation, time doing nothing, is underrated in society. There’s great pressure to be busy or to be seen to be doing something, all of the time, but only when you step outside of that are creative thoughts more likely to come. The Guardian liked our ideas, and offered to help with office facilities and printing. They saw that we attracted talented young writers. Soon Tom and I began to work for the Guardian’s Product Development Unit, coming up with ideas for new sections. While I was there, I created their mini guide for the Glastonbury Festival—part of the Guardian sponsorship of the festival—it hangs around your neck and tells you what’s on and when. 15 years later, they’re still distributing it there every year. Tom and I were doing bits of commercial work like this, at the same time as producing the Idler, partly because we weren’t getting paid for doing the magazine. Besides the Guardian, we worked for various companies like Channel 4 and PlayStation, often as a kind of two-man ad agency. The Idler magazine was successful in terms of reputation, if not financially. We always had legendary parties in Farringdon in London.

Then in 1998, we started an absinthe importing company. The musician John Moore wrote an article for the Idler about the colourful history of this incredibly strong and infamous alcoholic spirit; how it was banned in France and several other countries around the First World War. It was the favourite tipple of the avant-garde in fin-de-siècle Paris; Toulouse-Lautrec, Rimbaud, Baudelaire, Oscar Wilde all drank it. Van Gogh was said to have cut off his ear on it. Some claimed it nearly brought Paris to its knees. The intoxicating wormwood herb, in combination with extremely strong—and in some cases very impure—alcohol content, made it somewhat of a dangerous drink. But it became illegal for many other, more political, reasons too. The establishment disliked its association with radical artists, and its popularity amongst women. The wine industry considered it unwelcome competition following blighted harvests. John Moore discovered that it wasn’t actually illegal in the UK, and so, following a pub conversation, we decided to form a company (with a fourth partner) to import it from the Czech Republic. Just a few months later, everyone was drinking absinthe in fashionable London bars like the Groucho Club. A huge media frenzy ensued; “The Green Fairy Returns” (La Fée Verte was its original name) was on the front of the Guardian, the Daily Mail fretted about how awful it all was, and a whole raft of companies then started importing. It was such an interesting project to be involved with, and it began a world-wide craze. Absinthe is no longer illegal anywhere these days.

After Tom and I had been producing the Idler for 10 years, we wanted to mark the anniversary by taking a break. I went on a seven month sabbatical, swopping my flat in London with one in Rome. I learned Italian, did very little work, and I came to terms with a period in my life that lacked any structure. It was at times challenging, having had so much on in London. But I was really happy, living in an idyllic location in Rome, and spending my time thinking. It was during this period that the idea of doing something with clouds came about. I had always loved clouds, right from an intense curiosity about them in my childhood. I thought it was a shame they get such a bad press. The break from work had given me space for a major shift in my thinking, something that’s difficult to have in an office, as we have always argued in the Idler. I felt that, far from things to complain about, clouds are one of the most evocative, diverse, poetic aspects of nature. I didn’t know whether to do a website, a book, a TV programme, or what, but when I came back from Rome, a friend in Cornwall asked me to speak at a literary festival she’d started, the Port Eliot Festival. I thought if I gave the talk an unusual name, more people would come along, so I called it “The Inaugural Lecture of the Cloud Appreciation Society”, even though no society existed. Lots of people turned up, and many asked how they could join, which made me think that perhaps we actually do need a society. So I bought a book on how to put up a website, and in 2005 The Cloud Appreciation Society was up and running. It just spread infectiously. There’s often a lot of luck with these things—with the timing for instance. Small digital cameras had become ubiquitous, and the ease of emailing photos had dissipated through the population, so the Society photo gallery became an enormous resource. There are now 3,000 members, from almost 100 countries, and some 10,000 photos on the gallery. In its first year, I got a Yahoo! award for the Best Weird and Wonderful Website. I went on national TV, and the society rapidly grew. Part of the reason for its success is that there’s humour and whimsy involved. I wrote a book, The Cloudspotters Guide, which 28 publishers turned down before I persuaded one to take it on. It is now in 20 translations and has sold a quarter of a million copies here in the UK. I’ve written other books since. The Wavewatcher’s Companion was perhaps the most challenging because of its huge scope (about all waves, not just the ones in the oceans). It did moderately well, but was awarded the Royal Society Winton Prize for Science Books in 2011. The prize was such a genuine surprise to me. It is the most prestigious award in popular-science publishing, with previous winners like Steven Hawking and Bill Bryson. That break doing nothing in Rome, after which I changed from being a designer to being an author, turned out to have been a significant time for me.

Tom Hodgkinson and I have collaborated once again to produce a book about the ukulele. It is called The Ukulele Handbook, and charts the fascinating history of this unpretentious little guitar. From cloud spotting to wave watching to ukulele playing…you might wonder if there’s any logic to the progression. If there is, it’s that the interesting things in life happen when you manage to step away—however momentarily—from the pressures of the daily grind.”