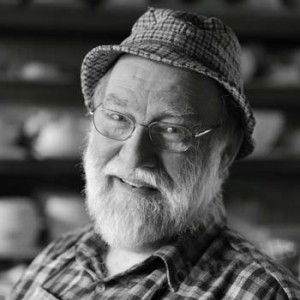 I was born on 21st July 1939 in the pottery cottage belonging to my grandfather Bernard Leach, in St Ives, Cornwall. My boyhood in St Ives was pretty idyllic; our playgrounds were all the coves and beaches round West Penwith, and I can remember when the distress rockets went up, running down to the harbour to watch the lifeboat go out, which was the most exciting thing for a small boy. It was wartime, my father was away in the army with the Duke of Cornwall’s Light Infantry, and mother invited a friend she’d met at the bus stop in St Ives to bring her two little girls round to have a bath, because we had a proper one, and they only had a galvanised tub in front of the fire. We were all aged about three or four, so my brother and I, who were nasty little boys and made the girls sit up the tap end, shared our bath tub with these two little girls and had lots of fun – and that was how Lizzie and I met. We married in 1961, so it’ll be our 50th anniversary later this year.

My father David was in partnership with his father Bernard in St Ives. Grandfather set up the pottery there in 1920, where there was already a very well-established artistic community going back to the 1880’s. After he returned from studying pottery in Korea, China and Japan between about 1910 and 1920, he’d been asked to join the Cornwall Handicraft Association, and had some assistance in setting up the pottery in St Ives. To put it into perspective, he started making pots in the old fashioned way, like I do now, during what was the post-industrial, post Victorian era, and his approach was controversial, very influenced by his experiences in Oriental culture, and caused questions to be asked. What was this man doing returning to the old ways, hand-throwing, when all the interest of the time was in new mould-making machinery, and mass-production? He would talk about spirituality, the “soul and personality” of the pot, and I’m the same, but the difference is that today there’s more acceptance of this approach, and I think Grandfather’s work had the same ethos as all craftspeople who go against the guide of modernity and the industrial process; they mind about their work, they care about it. If you ask me who am I making pots for, I’d have to say it’s for me. In designing and making pots, I’m trying to satisfy my own standards and criteria before I’m happy to present them to the customer; whilst I can’t ignore what the market wants, my work is product-led rather than market-led. When I have a cup of coffee from another potter’s mug, I like to feel I can commune with the maker, who may be someone I may already know, and although the coffee tastes the same no matter what I drink it out of, it’s a privilege to use a handmade object, and this adds an extra dimension to the experience.

I went to Dauntsey’s School, in Wiltshire, but I left school a very academically underachieved schoolboy. I loved school, but it was the sport I loved, and was in all the teams, so my parents were a bit disappointed with me. In about 1955/56, my father and mother moved to Bovey Tracey, and a year after that I left school and started my 5-year apprenticeship with my father. He’d helped set up a pottery at a Carmelite monastery in Kent, and I went there during my apprenticeship to work, which I really enjoyed. Then I went to work for a well-known potter called Ray Finch at Winchcombe in Gloucestershire, who’s a lovely, humble man, still alive at 96. And then I worked with my Grandfather, so that was four different potters over a 5 year period, all very exciting, and in the process I learned to both pick up and discard different approaches to the job, and find out what suited my own style.

After our son Benedict was born I was looking for a good job, before I settled down; I had no money to set up on my own. One came up in California, at a lovely place called Mendocino on the coast about 150 miles north of San Francisco, and I worked at the Art School, and helped set up a pottery. We were there 6 months, in 1963, so it was an interesting time. I remember a story in the San Francisco Chronicle at that time; a woman had run naked through the streets of St Ives, ending up tolling the church bell in a dramatic fashion. This presented the authorities with quite a problem as to how to restrain her, as her arms were firmly attached to the bell rope, providing them with no convenient parts of her to catch hold of. And of course the Beatles had just exploded on the scene, so everyone was saying how very exciting life must be in England. Then when we came back to England, my dear mother-in-law lent us £3000 and that enabled us to buy this place at Muchelney, in ’64, and build a kiln.

These were all old farm buildings, where once they made cheese, and stripped withies. Often it was the woman left at home who would strip the withy using a brake, a single post with a v-shaped device which stripped the bark as it was pulled through. At one time nearby in Kingsbury Episcopi there were several withy merchants; also a blacksmith mending farm implements, a boot maker, strappers who dug the ditches, three bakeries, two butchers, and a saddlery, so there must have been dozens of little live/work situations; there were also two pubs and two grocery shops. Originally we didn’t have a shop; everything more or less was sold wholesale, but it was clear that people like to buy from the source. So we took down the old traditional double pigsty that was here, saving the blue lias stone and some tiles, and in ’67 built the shop, so that we could retail. And then nearly 7 years ago we built the gallery, which despite turning out to be quite a lot of work, does keep the place a bit lively. We’re lucky here at Muchelney, which is comparatively well-known with the historic Abbey and the Priest’s House, so there are lots of visitors and we enjoy a sort of symbiotic relationship. I couldn’t operate from an industrial estate, which is maybe what the planners would have preferred.

In 1972 Nick Rees wrote to me. He was a teacher, a bit disillusioned with his work, and wanted to do a pottery apprenticeship. That was 39 years ago, and he’s still working here, and then Mark Melbourne, who was originally taught by my brother Simon, rejoined us 7 years ago. So from Monday to Friday they work for the business, producing the repeat ware from my designs, but as my grandfather did, I encourage them to make their own pots in their own time, which are then put through the kiln and sold through the gallery, keeping their own creative spirit alive.

In 1986 I bought 9 acres of land here behind the pottery, and two years later dug the pond, landscaped it and planted 500 trees. Then in ’91 planted a further 3500 trees, a mixture of indigenous broadleaf species. I’d been burning wood in the kilns, offcuts from sustainable sources, and I began to think about how much this country needs more trees, about how we’ve used up all our own indigenous forests over the centuries, and now we’re exploiting other countries’ resources. And then finally, I heard about the Yanomami Indians in the Amazon who in the ’70’s were ruthlessly cleared from their villages by beef or timber barons; they were in the way, they just didn’t count, and I was shocked. So what I’ve done with my little scheme is a speck, it’s nothing, but lots of people are doing it. What started as a conscience thing has now become an indulgence. I enjoy it, almost more than I can say, watching the trees and the wonderful myriad of species within the habitat grow and develop. It’s quite amazing how quickly it’s all happened, and now because of the dragonfly population it’s a designated County Wildlife Site.

As for our family, as well as my eldest son Benedict, there’s Jennifer, who incidentally married an American, Doug, and they live in Glastonbury, Connecticut; there’s also Karen, and Joe, and Tobias. Between them there are 10 grandchildren, and all of them except Jennifer’s children over in the States live within about 16 miles of here. So we’re lucky, with our family, the pottery, and the land; they’re all so very close by.