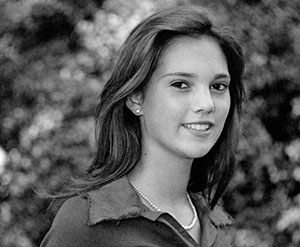 ‘My photograph was taken by Gordon Hall as a result of a silent auction to raise money for the church in the village where I live with my parents. My mother was the successful bidder.

I am 15 years old and currently a pupil at an independent  school for girls. I am in the upper 5th studying for my GCSEs this year, so I am having to work hard, but I try to find time to do lots of sport as I am very keen on lacrosse, tennis, swimming and gymnastics.

My favourite subject at school is art and I like photography and design. I was given a digital camera for my birthday which I use all the time. I like to be able to edit my photographs using a computer. I am hoping that one day I might be able to go to art school or university in London to study for a career in photography, perhaps in the fashion world, but I realise I have a long way to go yet.

I am very fortunate in that I come from an artistic background with several relatives, both past and present, who were or are artists. My mother is very keen on painting and my father makes pottery. The Tangye family, who are my relatives, were all very artistic and inventive and Derek Tangye is a well-known author who has written  many books.

My grandfather was also an author and my great uncle was the film director David Lean, who produced such epics as Bridge Over the River Kwai, Doctor Zhivago, and Lawrence of Arabia to name just a few. I hope that I have inherited some of their creative talents.

My parents and I moved to Somerset in 2001 with my dog, a Dandie Dinmont terrier called Hamish.  My half brothers and sisters are older and live in London and Cornwall and I like to visit them whenever I can. We came from West Sussex where we had lived since I was born and, at first, I found Somerset very quiet by comparison, but now I am used to it and I find the village where we live very friendly, and an interesting village too.

Before I went to my present school I was at Perrott Hill School in North Perrott which was the Manor House and previous home of the Hoskyns family, who still live in North Perrott and whose family have owned the manor since 1790. One of the stewards of the manor lived in my house during the Second World War, when the kitchen was used as the village hall because the real one was taken over by the army. W.I. Meetings were held in the house and unrationed meat pies were sold from a large sash window, with the villagers coming through the garden to buy them. The practice was stopped after several of them were taken ill with food poisoning!’ GH