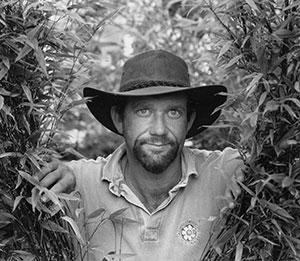 Kieron Bewes has lived in and around Sidmouth, Devon, all his life. After a short career in the building trade he developed a life-long passion for horticulture. Kieron takes up the story:

‘I was born in the Cottage Hospital, Sidmouth, in 1972. Growing up, I was always excited when we visited my grandparents; they loved gardening and grew nearly everything from seed or cuttings. My sister and I were always given lots of tasks to do in their garden and our reward was to pick the fresh strawberries, tayberries, runner beans or whatever else was in season. This is where my love of gardening started.

School was a bit of a survival game but I eventually came out unscathed, leaving at fifteen with just one GCSE in rural science. I followed my father into the building trade and started a City&Guilds course in bricklaying. I got a job with East Devon District Council’s repair team. I passed my driving test at eighteen and was given my own canary yellow Bedford Rascal van. I was sent out alone to fix anything from a leaky gutter to fitting lead trays above windows. I went to Plymouth to take my advanced brickwork exam; unfortunately we were all made redundant two weeks after I found out that I had passed.

When my mother told me about a gardening job at the local hotel where she worked, I applied. After an interview and a walk around the four and a half acre site, I got the job. I finished with the District Council on Friday and started my new career as a gardener the following Monday. I was like a fish out of water. It was the start of the bedding season and in the glasshouses were hundreds of trays of seedlings, which all looked the same to me. The Head Gardener, Maurice, was just fantastic; he told me that they might all look the same to me now, but over time I would begin to recognise them and learn more. We struck up a great friendship which still stands to this day, although with my busy life I don’t see him as much as I would like to.

Maurice told me I should get some qualifications, so I enrolled part-time at Bicton College. After five years I finally had qualifications under my belt. Maurice retired shortly after, and I stepped in to fill his boots as Head Gardener. But it wasn’t the same without him and with management changes it became a real uphill struggle. Every year our budget was cut and it was harder to find reliable staff. I stayed on as Head Gardener for about five years, then, one day, I got a phone call from my current boss, Ian Barlow. He had just bought Sidmouth Garden Centre and asked me if I would like to help run it with him. I jumped at the chance and it’s been full steam ahead ever since.

We knocked down the old shop and rebuilt a new one ourselves. We went on to build a restaurant and new car park, and have worked hard over the last four years to gain a really good reputation for customer care, high quality plants, and food.

Working at the garden centre has led on to many different things for me. I was asked to judge the East Devon District Council’s garden competition, and was driven around for two days by this most lovely lady. We hit it off straight away and one year later she became my wife. I also help with judging at Sidmouth in Bloom and at local horticultural shows. I teach horticulture and environmental studies at local schools, and I give talks and demonstrations on all aspects of gardening. I really enjoy writing about the subject that means so much to me, with my gardening columns for local newspapers and magazines.

I don’t have much spare time these days, but what time I do have I enjoy spending with my wife and daughter, walking our dogs in the beautiful East Devon countryside.’ PP