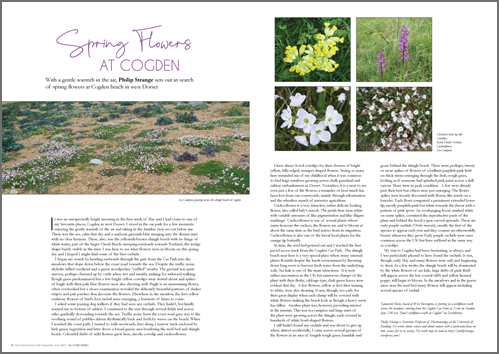 It was an unexpectedly bright morning in the first week of May and I had come to one of my favourite places, Cogden in west Dorset. I stood in the car park for a few moments enjoying the gentle warmth of the air and taking in the familiar view set out below me. There was the sea, calm that day and a uniform greenish-blue merging into the distant mist with no clear horizon. There, also, was the yellowish-brown shingle beach with its fringe of white water, part of the larger Chesil Beach sweeping eastwards towards Portland, the wedge shape barely visible in the mist. I was here to see what flowers were in bloom on this spring day and I hoped I might find some of the first orchids.
I began my search by heading eastwards through the gate from the Car Park into the meadows that slope down below the coast road towards the sea. Despite the traffic noise, skylarks trilled overhead and a green woodpecker “yaffled” nearby. The ground was quite uneven, perhaps churned up by cattle when wet and muddy, making for awkward walking. Rough grass predominated but a few bright yellow cowslips were dotted about and spikes of bugle with their pale blue flowers were also showing well. Bugle is an unassuming flower, often overlooked but a closer examination revealed the delicately beautiful patterns of darker stripes and pale patches that decorate the flowers. Elsewhere in the meadow, the first yellow cushiony flowers of bird’s foot trefoil were emerging, a foretaste of times to come.
I asked some passing dog walkers if they had seen any orchids. They hadn’t, but kindly warned me to beware of adders. I continued to the east through several fields and across stiles gradually descending towards the sea. Traffic noise from the coast road gave way to the soothing sound of pebbles driven rhythmically back and forth by waves on the beach. When I reached the coast path, I turned to walk westwards, first along a narrow track enclosed by lush green vegetation and later above a broad grassy area bordering the reed bed and shingle beach. Colourful drifts of wild flowers grew here, mostly cowslip and cuckooflower.
I have always loved cowslips for their clusters of bright yellow, frilly-edged, trumpet shaped flowers. Seeing so many here reminded me of my childhood when it was common to find large numbers growing across chalk grassland and railway embankments in Dorset. Nowadays, it is a treat to see even just a few of the flowers, a reminder of how much has been lost from our countryside, mainly through urbanisation and the relentless march of intensive agriculture.
Cuckooflower is a very attractive, rather delicate looking flower, also called lady’s smock. The petals here were white with variable amounts of lilac pigmentation and lilac filigree markings. Cuckooflower is one of several plants whose name honours the cuckoo; the flowers are said to bloom at about the same time as the bird arrives from its migration. Cuckooflower is also one of the larval food plants for the orange tip butterfly.
In time, the reed bed petered out and I reached the first paved access track from the Cogden Car Park. The shingle beach near here is a very special place where many unusual plants flourish despite the harsh environment by throwing down long roots to harvest fresh water from the underlying soils. Sea kale is one of the main attractions. It is now rather uncommon in the UK but numerous clumps of the plant with their fleshy, cabbage-type, dark green leaves were evident that day. A few flowers, yellow at first then turning to white, were also showing. It was, though, too early for their great display when each clump will be covered with white flowers making the beach look as though a heavy snow has fallen. Another plant was, however, providing interest in the interim. This was sea campion and large mats of the plant were growing across the shingle, each covered in hundreds of white bowl-shaped flowers.
I still hadn’t found any orchids and was about to give up when, almost accidentally, I came across several groups of the flowers in an area of longish rough grass, bramble and gorse behind the shingle beach. There were, perhaps, twenty or more spikes of flowers of a brilliant purplish-pink held on thick stems emerging through the drab, rough grass, looking as if someone had splashed pink paint across a dull canvas. Many were in peak condition. A few were already past their best but others were just emerging. The flower spikes were loosely decorated with florets, like jewels on a bracelet. Each floret comprised a prominent extended lower lip, mostly purplish-pink but white towards the throat with a pattern of pink spots. An overhanging hood, marked white on some spikes, contained the reproductive parts of the plant and behind the hood a spur curved upwards. These are early purple orchids (Orchis mascula), usually the first of the species to appear each year and they conjure an otherworldly beauty wherever they grow. Early purple orchids were once common across the UK but have suffered in the same way as cowslips.
My visit to Cogden had been fascinating, as always, and I was particularly pleased to have found the orchids. It was, though, early May and many flowers were only just beginning to show. In a few weeks, the shingle beach will be dominated by the white flowers of sea kale, large drifts of pink thrift will appear across the low coastal cliffs and yellow horned poppy will begin to bloom. In the meadows and in the grassy areas near the reed bed many flowers will appear including several species of orchid.

Tamarisk Farm, based at West Bexington, is putting on a wildflower walk across the meadows starting from the Cogden Car Park at 11am on Sunday June 12th (see “June’s wildflower walk at Cogden” on Eventbrite).