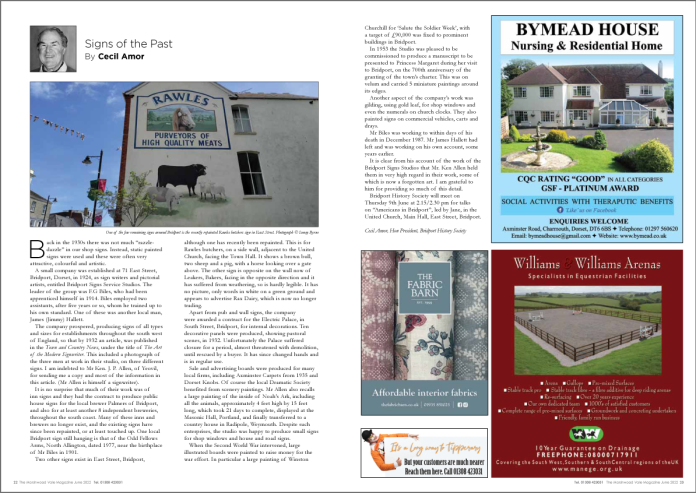 Back in the 1930s there was not much “razzle-dazzle” in our shop signs. Instead, static painted signs were used and these were often very attractive, colourful and artistic.
A small company was established at 71 East Street, Bridport, Dorset, in 1924, as sign writers and pictorial artists, entitled Bridport Signs Service Studios. The leader of the group was F.G Biles, who had been apprenticed himself in 1914. Biles employed two assistants, after five years or so, whom he trained up to his own standard. One of these was another local man, James (Jimmy) Hallett.
The company prospered, producing signs of all types and sizes for establishments throughout the southwest of England, so that by 1932 an article, was published in the Town and Country News, under the title of The Art of the Modern Signwriter. This included a photograph of the three men at work in their studio, on three different signs. I am indebted to Mr Ken. J. P. Allen, of Yeovil, for sending me a copy and most of the information in this article. (Mr Allen is himself a signwriter).
It is no surprise that much of their work was of inn signs and they had the contract to produce public house signs for the local brewer Palmers of Bridport, and also for at least another 8 independent breweries, throughout the south coast. Many of these inns and brewers no longer exist, and the existing signs have since been repainted, or at least touched up. One local Bridport sign still hanging is that of the Odd Fellows Arms, North Allington, dated 1977, near the birthplace of Mr Biles in 1901.
Two other signs exist in East Street, Bridport, although one has recently been repainted. This is for Rawles butchers, on a side wall, adjacent to the United Church, facing the Town Hall. It shows a brown bull, two sheep and a pig, with a horse looking over a gate above. The other sign is opposite on the wall now of Leakers, Bakers, facing in the opposite direction and it has suffered from weathering, so is hardly legible. It has no picture, only words in white on a green ground and appears to advertise Rax Dairy, which is now no longer trading.
Apart from pub and wall signs, the company were awarded a contract for the Electric Palace, in South Street, Bridport, for internal decorations. Ten decorative panels were produced, showing pastoral scenes, in 1932. Unfortunately, the Palace suffered closure for a period, almost threatened with demolition, until rescued by a buyer. It has since changed hands and is in regular use.
Sale and advertising boards were produced for many local firms, including Axminster Carpets from 1935 and Dorset Knobs. Of course the local Dramatic Society benefited from scenery paintings. Mr Allen also recalls a large painting of the inside of Noah’s Ark, including all the animals, approximately 4 feet high by 15 feet long, which took 21 days to complete, displayed at the Masonic Hall, Portland, and finally transferred to a country house in Radipole, Weymouth. Despite such enterprises, the studio was happy to produce small signs for shop windows and house and road signs.
When the Second World War intervened, large illustrated boards were painted to raise money for the war effort. In particular, a large painting of Winston Churchill for ‘Salute the Soldier Week’, with a target of £90,000 was fixed to prominent buildings in Bridport.
In 1953 the Studio was pleased to be commissioned to produce a manuscript to be presented to Princess Margaret during her visit to Bridport, on the 700th anniversary of the granting of the town’s charter. This was on velum and carried 5 miniature paintings around its edges.
Another aspect of the company’s work was gilding, using gold leaf, for shop windows and even the numerals on church clocks. They also painted signs on commercial vehicles, carts, and drays.
Mr Biles was working to within days of his death in December 1987. Mr James Hallett had left and was working on his own account, some years earlier.
It is clear from his account of the work of the Bridport Signs Studios that Mr. Ken Allen held them in very high regard in their work, some of which is now a forgotten art. I am grateful to him for providing so much of this detail.
Bridport History Society will meet on Thursday 9th June at 2.15/2.30 pm for talks on “Americans in Bridport”, led by Jane, in the United Church, Main Hall, East Street, Bridport.