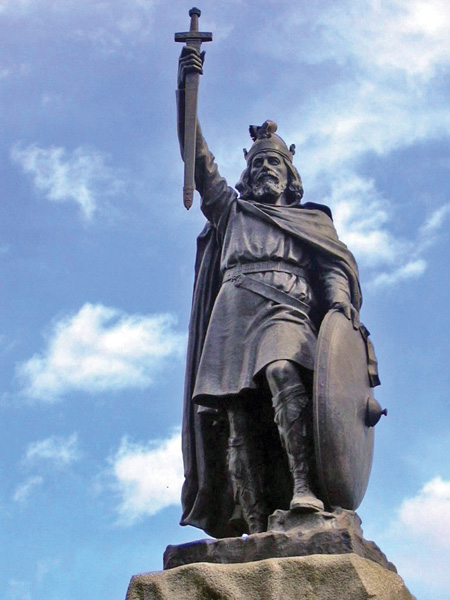 King Alfred was one of us, in that he fought for and made Wessex what it became. It is said that he was partly of Celtic blood and grew up in Anglo-Saxon Wessex.
Alfred was born in 849 AD possibly at Wantage, Berkshire, his father being King AEthelred. His mother was Osburga, who died when he was young. He was the youngest of six children, and his 3 elder brothers all became king in turn and predeceased him. Prince Alfred was taken to Rome to meet the Pope when he was about five years old, a common practice among his peers. Alfred married Ealhswith, a Mercian, in 868, in Gainsborough, Lincolnshire. After his brother AEthelred died, Alfred became King in April 871.
Around this time the Viking armies overwintered in England and around 870 and 871 the West Saxons lost five battles with them. Alfred fought the Vikings on the Great Ridgeway, but was beaten at Chippenham, in Wiltshire and retreated to the Somerset Marshes. He made a fort at Athelney, where evidence has been found of fires, possibly for sword making. Alfred then encamped with his army at Warminster, said to be three to four thousand strong. They encountered Guthrum and his Danish army encamped on a hill at Bratton, now near Westbury White Horse and a brutal fight ensued at Edington, Wiltshire, where Alfred and his men almost destroyed the Danes, chasing them back to Chippenham, in 878 .
As a result, Guthrum asked for baptism in the Christian faith and Alfred stood with him. Guthrum agreed the Treaty of Wedmore and settled in East Anglia and began to integrate with the Anglo-Saxons, Alfred and Guthrum having agreed a division of England. Alfred proceeded to conquer London from another Danish group, so that in 866 he then controlled all of southern England, in an area north and east of a line from London to south of the Mersey. Alfred then governed his land and established mints, producing silver coins, embossed with his head. His aim was to ensure that his subjects would be able to obtain coinage within a day’s walk. In Dorset this meant mints in Bridport, Dorchester, Shaftesbury and Wareham. Alfred also built walls around these mint towns, to improve their defences. Alfred would have known Bridport as Brydian, apparently.
Alfred considered how best to keep his territory safe and decided to build fortifications at strategic points, which were called Burhs, often on previous Iron Age forts. It is thought that near to present day Bridport was Bredie, at Danes Camp or Old Warren, in Little Bredy parish. This was not suitable to become a town, and so became neglected later, and the associated town became Bridport. Its purpose was to protect the land between burghs at Exeter and Wareham. The other Dorset burgh was at Shaftesbury.
The next act for Alfred was to form what we now call a navy, and he arranged the design of ships, twice the length of Viking ships and broader and so more stable. So these ships and the burghs protected the coast from attack from the sea.
Unfortunately Alfred suffered with his health, even on his wedding day. This was some internal problem, but what is not recorded. It did not deter him from attacking Danes in London and vanquishing them and establishing a mint there, with coins again bearing his head, increased silver content and embossed “Elfred Rex”.
It has been said that he learnt to read and write in middle age. Possibly he managed to find more time then! In 887 he called Bishop Asser to his West Saxon court, to teach him Latin and he was able to translate some Latin works into Saxon English. Asser became bishop of Sherborne, in Dorset, and recorded the biography of Alfred, in Latin. The “Anglo-Saxon Chronicle” was created probably under King Alfred’s wishes.
King Alfred died in 899, at 50 or 51 years, having reigned for 28 years. He is commemorated by a statue in Winchester, erected in 1901, Winchester having been described as Alfred’s favourite town. There is another smaller statue of Alfred the Great in the small Wiltshire town of Pewsey, erected at the time of King George V. King Alfred is also associated with the famous “Alfred Jewel”, probably a reading aid, to point at the word being read. It carried the legend “Alfred had me made”, in gold. It was found in marshes at Athelney, and has been suggested to have been a pendant.
There is only one question left to be considered, which is did Alfred actually “burn the cakes”, whilst in hiding in the Somerset marshes? As a child I was told that he took shelter, almost a vagrant, where a woman was baking and she asked him to watch the cakes. He was thinking of his strategy and forgot and the woman, not knowing that he was king, scolded him. This legend appeared somewhat later and may not be true!
The next meeting of Bridport History Society will be on Tuesday 12th of April, at 2/2.30 pm, in the hall and again on Zoom, when the speaker will be Rob Curtis, about “The Tolpuddle Martyrs”.