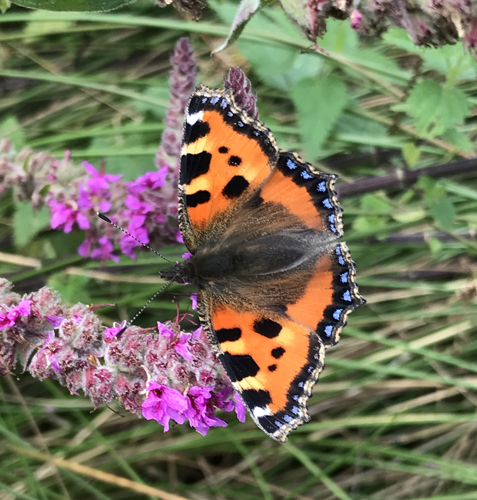 A community initiative for wildlife corridors in the Char Valley. By Owen Day and John Blanchard

As we emerge gradually from the lockdown, many of us are wondering what kind of future awaits us. It seems clear that our economy is headed for a very bumpy ride, and with no effective vaccine or treatment yet, we may still be in for some nasty surprises. But there is also a growing sense of hope that the recovery from this crisis might provide a much-needed opportunity to solve other problems too, and maybe start to heal our fractured relationship with nature and our planet.

A Green Recovery is on many people’s minds and increasingly spoken about by politicians of all persuasions. With the world hurtling towards climate breakdown and a collapse in biodiversity, surely a Post-Covid Green New Deal is a “no brainer”? Massive investments in clean technologies, renewable energy, regenerative farming and reforestation programmes, would create millions of jobs, kick-start our economy and help solve the climate and ecological crisis. Bring it on!
But while we wait to see what governments will do, many communities are taking action. One group of local people from around the Marshwood Vale have just launched a community initiative called Lifelines, designed to strengthen the health and resilience of our local wildlife and soils.
The Lifelines Project for the Char Valley starts with the insects—seeking to stop the decline in numbers locally and trying to encourage regenerative ways of managing that land so that insect populations—and the birds, mammals, reptiles and amphibians that feed on them—can revive and flourish once again. The project will start by mapping areas of land where pesticides—insecticides, herbicides and fungicides—are not being used*. It will then see how new areas of land can be added by finding anyone with land—from a small garden to a large farm or estate—willing to commit to managing their plot in ways that help insects. Farmers can join the scheme by including just part of their land, such as field margins and hedges to create corridors (see text box). A local farmer has demonstrated that hedges can be harvested profitably when coppiced for wood fuel on a 15-year cycle (1,2) thus helping wildlife and his business. To get the most benefit, these areas of pesticide-free land should link up to form wildlife corridors that can encourage wildlife and biodiversity. Natural England has already identified some of these “Priority Habitats”(3) and the Forestry Commission has also mapped the woodland inventory of England. Both of these are shown as layers on the Lifelines map.
At the heart of the project is an interactive online map that can be explored at www.thelifeline.site. Residents who manage their land without pesticides can join, and their fields or gardens will turn bright green on the map. As other residents learn about the scheme and decide to stop using pesticides, so these lifelines will spread across the map, like a colourful green mosaic, as the Char Valley starts to be restored to vibrant health, with more biodiversity and more resilient ecosystems. The map allows everyone to see how the project is going and get more involved in the management of their local environment.
So why focus on insects? In a nutshell, because they are very important and are in serious trouble. Healthy insect populations are essential to our ecology—skylarks, cuckoos, swallows, bats, frogs, hedgehogs and many other animals depend on them for food. They are also vital for our food supply, as orchards and many crops depend on them for pollination. A review of 73 studies (4) found that insects are in dramatic decline globally and that 40% of the world’s insect species could become extinct over the next few decades. The study’s authors conclude that “a serious reduction in pesticide usage and its substitution with more sustainable, ecologically-based practices, is urgently needed to slow or reverse current trends, allow the recovery of declining insect populations and safeguard the vital ecosystem services they provide. “
The 2019 State of Nature Report (5) found that insects in England are declining rapidly, both in abundance and distribution. Numbers of butterflies and moths, for instance, have dropped by 16% and 25% since the 1970s, with habitat-specialist butterflies declining by two-thirds over that period. The report lists the causes of the decline as linked to climate change, loss of habitat and intensification of farming, with the latter “having the biggest single impact upon nature in the UK over recent decades, with the great majority of that impact being to drive species’ populations downwards”.
The proliferation of pesticides in the UK, with over 400 varieties now permitted, was highlighted in recent report by the Soil Association (6). Farmers are often advised to use combinations of these and multiple applications. Consumers and wildlife are increasingly exposed to the “pesticide cocktails”, whose toxicity to humans has not been assessed. The herbicide glyphosate for example, a known carcinogen to mammals (7), is used on a huge scale and routinely found in food samples. Two thirds of our rivers contain over 10 pesticides, and 67% of soil samples contain multiple pesticides. About half of all bumblebees have two or more pesticides on their surface.
The Lifelines project hopes to be a small part of this movement to encourage more insects and wildlife back into our gardens, fields, and landscapes. It also hopes to foster discussions about how we can support our farmers in producing healthy food in an uncertain world, while ensuring a more resilient, greener and brighter future.
If you are interested in finding out more about the Lifelines please visit www.thelifeline.site or contact Owen at owenday@me.com

Note *. Except for occasional spot-spraying using an approved herbicide for the removal of harmful invasive and non-native plants as recommended by DEFRA
https://www.gov.uk/guidance/prevent-the-spread-of-harmful-invasive-and-non-native-plants

Lifelines and Farming
The participation of both organic and conventional farmers in the Lifelines project will be critically important to its success. It is hoped non-organic farmers will support the project and recognise the benefits to their business of having more biodiversity in the environment. It is well-known that high numbers of insects and bird in the margins of fields, reduces the impact of insect pests on crops and hence the need for expensive insecticides.
Biodiversity can help farmers reduce damage from pests and can also help them in other battles too, like the urgent need to have more climate-resilient soils – less prone to flooding, erosion and drought. Farmers are on the frontline in the battle against climate change, having to cope with extreme weather events, such as record-breaking rainfall followed by record breaking droughts. As these extreme weather events are projected to become more frequent and more intense in the coming decades, farming is also going to become much harder and will need to adapt. Flooding and soil erosion are already getting much worse, and poor farming practices are often blamed for aggravating matters.
Looking at changes to the Char Valley in the last few decades, it’s clear that criticism should not be levelled at farmers, but rather aimed at the misguided Common Agricultural Policy that has resulted in the current impoverished state of our environment, wildlife and soils. Fortunately, the CAP has now been replaced by the new Agriculture Bill 2020 that is currently under discussion, putting in place the framework that will hopefully align the interests of farmers with those of nature – allowing production that is truly environmentally sustainable, through what is called agroecology. From now on, public payments received by farmers will no longer be calculated based on their acreage and production but will be based instead on the “ecosystem services” they provide – public money for public goods. These services include maintaining soils, preventing flooding, increasing biodiversity and sequestering carbon in the soil. All of these critical ecosystem services depend on a healthy biodiversity – particularly insects.
The importance of biodiversity is at the heart of organic farming and regenerative agriculture, which are all demonstrating the possibilities of farming profitably, while providing healthier food (pesticide-free and nutrient dense) regenerating soils, preventing floods and absorbing carbon. Gabe Brown, one of the pioneers of regenerative agriculture and author of “Soil to Dirt” (8), says that by working with nature and by focusing on profit not yield, he managed to transform a loss-making conventional farm into a highly profitable and sustainable business. He and many other agroecological farmers are demonstrating how fertile soils can be built-up by using techniques such as no-till, multi-species cover crops and mob-grazing. Artificial fertilizers and pesticides are not needed, in fact they are positively excluded as they destroy the life-giving symbiosis that exist between plants, fungi and bacteria in healthy soils.
The amount of rainfall that healthy soils can absorb before they become saturated is truly amazing. A conventionally farmed soil often becomes saturated with half an inch of rain in an hour, but healthy soils can absorb water much more efficiently, sometimes an inch of rain in 10 seconds, and two inches in under 30 seconds (8). Healthy soils allow water to infiltrate so fast because they are full of channels and cavities made by fungi, worms and soil invertebrates. Scientists are only just beginning to understand the importance and complexity of soil ecology and its importance in flood prevention, sustainable food production and even in the fight against climate change. By dramatically increasing the amount of organic matter in their soils, regenerative farmers are pulling carbon out of the atmosphere and putting it back into the ground.
Society should recognise the huge challenges that farmers face with the vagaries of weather, markets and now government policy. Communities need to support their local farmers as they are asked to transition from a mindset dominated primarily on production, to one where food must be produced with greater consideration for wildlife and the climate emergency.