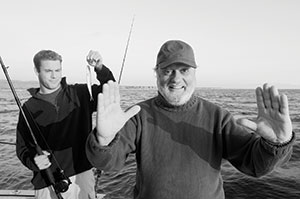 There are moments in everybody’s life when they know they’ve made a mistake. Commited an error of judgement. Backed a wrong ‘un. Laid an egg.  Bad choices are easy to make. The hard part is living with them.

When it comes to choosing people, to live with, to work with, or even just go fishing with, there is often a specific moment, an event, a feeling which indicates if you chose wrong or right. It might be a quiet inner-voice, whispering in your ear, or else a spittle-spraying shout in your face.

When I climbed on board a flats skiff in Florida to film an episode of Screaming Reels, and the skipper we’d rather hurriedly chosen, handed me a Baby Wet-Wipe tissue, to clean the soles of my shoes, a cold wave of dread drenched over me. I was about to spend the next twelve hours in the company of, and on-board the boat of, the most annally-retentive man on the surface of the globe.

Every thing about this man was precise. Exact. In its place. Every stitch of clothing, every molecule of tackle, was meticulously maintained and regimentally arranged. He wasn’t just neat and tidy, beyond the call of human endurance, he was also a one hundred and forty percent proof Know It All.

He could lecture on any given subject from ospreys to fluorocarbon monofilament. And lecture he did. He never once bothered to enquire how much I might know about any particular subject before launching into his fifteen minute lecture. It was as though he didn’t know or care what I knew or thought. It was of no interest to him. All he expected was that I would attend his floating seminar and sit in reverence to his wisdom.

The man drove me nuts. Sure, he knew where there were plenty of fish. And he could handle his skiff with skill and exactitude. I was lucky and caught plenty of fat redfish that day. But, I have to confess, I would have given up every last one of those redfish, and every single rod bending, reel screaming thrill, just to have had three minutes spent with my hands throttling his perfect soft throat and my socks stuffed in his pearly-white mouth.

Choosing a fishing partner is a sensitive issue which can’t be taken too lightly. Of course, there are different types of situation which call for different degrees of scrutiny. It’s a bit like the difference between dating and marriage. If you’re just flirting with a fishing partner, having a one-off day-out, then you can afford to take a risk. Share sandwiches with someone completely unusual. But if it’s a commitment to regular trips. If it’s forming a rod-bending relationship, you’re going to find hard to wriggle out of, then you need to be sure you have the measure of the man you’re intending to exchange maggots with.

Some of the mistakes I’ve made in choosing fishing partners, I’ve lived to regret. Some mildly, and some with more venom. One hopelessly enthusiastic lad I used to fish with eventually drove me mad because he would never shut up. He was pathologically incapable of silence. Now me, I like a chat. Like to enjoy the social and communicative aspect of spending a day with someone else. But my mate Paul could talk the legs off a herd of donkeys.

‘What’s the biggest fish you ever caught? What’s the deepest you ever fished? D’you think it’s going to rain? D’you think I should switch to a floating line? Have you ever tied a booby nymph? What’s it like in New Zealand? D’you reckon a daddy-long-legs would work now? Can I have a sandwich? What’s in the sandwiches? D’you think white bread’s really bad for you? Where’s the best trout river in England?’

Paul could ratttle off twenty questions in a minute. And the most aggravating thing was he didn’t even wait for an answer before the next question hit. Non stop. Sometimes I would sit in silence. Intentionally not answering him. Ignoring him. In a sort of silent protest. An indication of my lack of participation in this hamster-wheel style of talking. But it didn’t put him off. Didn’t affect him one iota. He just kept on firing off questions into the atmosphere, regardless of whether they were answered or not.

The Know It All, the Ear Basher and the Annally Retentive fishing partners can be annoying. But the one that really gets under my skin is The Competitor.

One of the first signs that you’re in a boat or on a bank with The Competitor, is his reaction when you hook a fish.

Quite a few times I’ve been out on a boat fishing beside someone, enjoying a chat, when I feel a bite, and I strike, then happily bend my rod into a fish and then a voice beside me says: ‘Oh, you bastard’.

This is a worrying sign. Now, don’t get me wrong, I’m not claiming to be perfect. Far from it. But I do feel that any fishing trip is a sort of team event. You take pleasure in your partner’s success. If he hooks a fish, even ten fish, you should be happy for him and take some joy in the realisation that the trip, even if you personally have blanked, has been a success.

So, when your partner says ‘Oh, you bastard’ as you hook into a fish, it suggests somehow he feels your success, is at his detriment. As though you’ve taken his fish. Or your good luck is his bad luck. He can’t just feel happy for you. This reaction gives me a very bad vibe.

Part of what I love about fish and fishing is the elements of our characters that it helps to bring out. Only sometimes the elements that get illustrated are the very things that make some men worth giving a wide berth.

And it’s the same story when a man lands a fish. Some guys talk to it lovingly, kiss it even, hold it aloft and look amorously towards the camera lens. Others simply chuck it on the grass and holler ‘gotcha ya bugger!’

You just never really know a man until you’ve watched him wet a line.