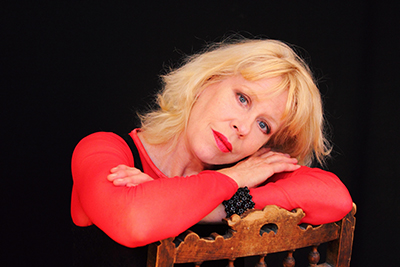 Songs like ‘Will You’ and ‘Eighth Day’ were huge hits for Hazel O Connor in the 80s, but along with the iconic film, Breaking Glass, they were all part of a difficult music industry journey. Prior to her visits to Ilminster and Eype, Fergus Byrne has been finding out what happened along the way.

Hazel O Conner sometimes introduces her 1981 hit, Will You, as the song that may have been responsible for the consummation of many relationships. ‘I think there were some babies born to this song’ she says with a smile. With its beautifully innocent lyrics and haunting melody, it was certainly unforgettable, perhaps one of the most powerful ballads produced in the eighties. Now, nearly thirty-five years later the song is just as powerful, just as relevant and who knows, perhaps just as effective. But then so are many of those that came later. Her most recent recording, Here She Comes, is the third album to emerge from her ongoing collaboration with jazz saxophonist Clare Hirst (The Belle Stars, Communards, David Bowie) and pianist Sarah Fisher (Eurythmics, Sax In The City). The threesome will play at The Square and Compass in Ilminster on April 10th and Eype Church Centre for the Arts on May 5th.

Hazel O Connor is one of those names that will forever be super-glued to the era that emerged from the bands that barged onto the music scene in the late seventies. It was a time when extended hair, extended guitar solos, and enlarged egos simply didn’t speak to a new generation of music fans. Hazel was launched onto the big screen in the film, Breaking Glass, which told the story of a band trying to make it in the music industry. They found that the big time is not all it is cranked up to be. The film, and Hazel’s subsequent career, had its fair share of highs and lows and years later she found herself telling her life story in her own unique way.

Cold-calling small theatres and concert venues around the country to try to book gigs for her Beyond the Breaking Glass tour in 2000, Hazel would introduce herself by saying ‘I was a little bit famous in the eighties for a film called Breaking Glass’. Her unpretentious approach and down to earth Midlands accent accorded no small measure of respect. Depending on the age of the person on the other end of the phone there might either be a painfully empty silence, the sound of memory banks kicking slowly into motion or an immediate shriek of recognition. Some people even broke into song whilst others took the time to relate their favourite moment from her career. However the most common response—and one that many music fans ask about dozens of singers and was, ‘Oh yes, whatever happened to …?’

In Hazel’s case the answer is ‘quite a lot’. When I talk to her at her home in County Wicklow in Ireland the first thing she says is ‘OK let me get comfortable.’ Not because she is settling in for a long chat—which actually she does—but because she is attached to a blood pressure monitor and warns me that it will go off every half hour, so could I please ignore the sound effects.

Like many musicians Hazel had a high point in her career and was then moved out of the limelight to make way for whatever new wave the music industry wanted to promote—however she never went away. Litigation over a contract stopped her from recording and gigging and gave her the kind of music industry experience that people as diverse as Tom Petty, Eminem and Michel Jackson had been through. A harrowing trawl through the courts for royalties.

The day before she was offered the starring role in the film, Breaking Glass, she had signed a contract with Albion Records that she alleges was offered when the company knew she was about to make a name for herself. ‘The signing of that contract screwed the rest of my career’ she explains, admitting that her lawyer had advised against her signing it. Having initially signed with the company for £1 and despite being described by one music hack as ‘a cross between Debbie Harry and Barbara Windsor’ she was getting nowhere, so she took a job answering the phone. One day a casting agency rang to say that they would like some information about one of the artists on the label called Hazel O Connor. ‘That’s me’ she cried and answered their questions. After she put the phone down nothing more happened and she forgot all about it, until one day she re-signed her contract based on what she described as the label’s insistence that she would never get a better offer. The following day the casting agency rang her at home to let her know she was top of their list for the lead in Breaking Glass. No coincidence she guessed, but buoyed by the excitement of the moment it was to be some time before she realised she was tied up in contractual knots that meant she wouldn’t see a penny of royalties for the next fifteen years.

In the meantime she played in small clubs doing jazz covers and made ends meet doing waitressing work with friends like Clare Hirst. She made an album with the late Martin Rushent whom she rated as ‘a genius’, but with what seemed like a never-ending tangle of litigation there appeared to be no future for her in the UK. ‘I got pretty much fed-up’ she said. ‘I wanted to have a life. It seemed to me that I had spent all my time chasing something that had come my way. I’d lost it, let it go, was ripped off, didn’t have anything to live on and was always living hand to mouth. So why don’t I go and have an adventure and live hand to mouth somewhere else.’ The somewhere else turned out to be Los Angeles. ‘People were offering me acting jobs’ she laughs, ‘so I decided I’d go to Hollywood.’ Hazel looked at it as an adventure and was picked up by an agent at the same time as the Hollywood writers’ strike.

During the writers’ strike she was about to make a TV series when suddenly the strike ended and TV companies went back to finishing the back-log of work that had accumulated during the strike. ‘In the business if you’re there at the right time and right place then happy days’ she says. ‘If things like that happen, then go to the back of the queue’. In the meantime she had a band and did a little busking on Venice Beach. ‘It gave me freedom. I didn’t become part of that Hollywood Schmollywood stuff.’

The Hollywood adventure came to an end when she was diagnosed (wrongly as it turned out) with an unusual cancer. Like a springboard the news bounced her back to reality and she decided to follow her long-held dream of living in Ireland.

‘I’d always imagined that I’d go to Ireland’ she remembered. ‘In my head I’d always thought if ever anybody gives me a nasty diagnosis of an illness—bringing the death knoll in—I would go to Ireland or somewhere like Ireland. Because I wouldn’t want to lose my body, as in die, in a shitty place like Los Angeles. And my imagined beautiful way to die was to die on the side of a green hillside looking up at the blue sky—mind you; you don’t often get a blue sky in Ireland.’

Despite having family there the person she turned to for help was someone who had been her agent many years before. When he was just nineteen, Louis Walsh, who later found fame as a judge on the X Factor had been the one who drove her from gig to gig. She phoned Louis and told him about her diagnosis and he organised a mortgage broker and helped her move, as well as find her a band. ‘And basically I moved within three months of the diagnoses.’ Then they phoned her from Los Angeles and told her that they had made a mistake. ‘When big things happen in your life’ she says ‘you make big decisions that change your life—and I think always for the better. Coming to Ireland was like fruition musically for me.’ She had worked with some fantastic soul musicians in LA but when she went to Ireland she linked up with what she said were ’some fantastic traditional musicians’.

From there Hazel’s musical journey took a direction that was more driven by her own will than by the whims of the industry. ‘I came here’ she says, ‘built up relationships with brilliant musicians and used to go to a sort of song-writers club in Dublin and people like Glen Hansord and Damian Dempsey would play  …and that’s why I stayed.’

As if to hammer home the need to carry on making music that came from somewhere deeper than a contract, she learned that her mother had been diagnosed with cancer. The news helped Hazel to see that she wanted her mum to see her performing music that she loved, but it also had a powerful effect on her attitude to her own life and future. ‘It’s a wake-up call for all the things that you dream of doing and you don’t do’ she says. ‘It doesn’t matter if they are commercially successful or not, it’s a matter of doing things that you love doing, with people you love doing them with.’

The result is beautiful collaborative work between Hazel, her old friend Clare Hirst and Sarah Fisher. Highlights from the recent album include In The Still Of The Night, Home, Don’t You Call Me Darling and Call Out Your Name—a heartfelt call to her late mother.

With influences as diverse as Tom Waits, Billie Holiday, Lou Reed and French chanson the description that the songs are ‘poignant with longing, loss, regret and unrequited love and delivered with unswerving resonance by one of the most distinctive song-stylists of theatrical pop’ is hard to argue with.

There is an earthiness and acceptance of her place in the world, in the Hazel O Connor of today. Perhaps she sums it up in her own description of why this new lease of life is so valuable: ‘As far as what I write, I want it to be authentic, real—otherwise I don’t want to do it.’