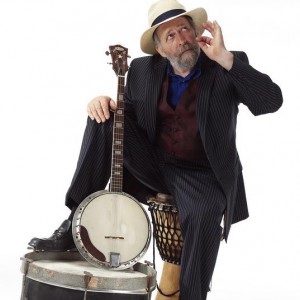 Wild Willy Barrett tells me he doesn’t beat John Otway’s head against the microphone for percussive effect on their song ‘Headbutts’ any more. He mutters something about Otway getting old and how it isn’t good for his health.

For many loyal fans that might signal the end of an era, but as it happens the dynamic duo still play occasional gigs together and stalwart followers and new fans are never disappointed. Anyone who saw the on-stage anarchy created by the relationship between Otway and Barrett in the late 70s witnessed something unforgettable. Headbutts was one of the many highlights from the duo’s ever inventive and far from predictable show. Their antics on stage, which inevitably included Otway having to extricate himself from rafters or nearby scaffolding, while Barrett alternated between musical genius and sawing an instrument in half – again purely in the interests of percussive effect – left enduring memories. It would be hard to find another musical duo that commanded such loyalty. One biker club has called themselves, The Beware of the Flowers Motorcycle Club after an Otway and Barrett song.

Today Wild Willy Barrett, a talented multi-instrumentalist, still with an eye for the wacky side of performance, produces much of his musical output in the folk circuit which shows off his talents so well. Taught to play as a toddler by his father, who played in a Hawaiian band, Barrett proved capable of learning any instrument he could get his hands on. Soon Willy’s music anthology, a 2 CD package covering recordings from 1968 to the present day (40 tracks), is to be released.

Apart from sporadic musical mayhem with John Otway, he also plays in a band called Sleeping Dogz with cellist Mary Holland and uilleann pipe player John Devine. Between them they play guitar, fiddle, cello, banjo, balalaika, uilleann pipes, whistles, harmonium and djembe, and that may be leaving out a few. The result is a fantastic and diverse blend of music from English, Cajun, Celtic and Moorish influences.

What many people don’t realise however is that Barrett is also an accomplished furniture maker. Before a recent gig in Glastonbury I helped him carry the harmonium into the pub and asked him about his musical beginnings. “Apparently I started when I was about three, on the ukulele”, he said. “My old man used to play in a Hawaiian band and I used to sit in on their rehearsals. That is how I got started – went on to guitar and fiddle, banjo, keyboards.” Exposure to Hawaiian music doesn’t seem to have stuck. Barrett remembers his early influences coming from an altogether different direction. “My dad had a very diverse collection, big-band stuff, country and western, jazz – all that sort of thing. When I was about 14 or so I discovered Delta Blues, which was unheard of in this country in the early 60s. And I was amazed that my old man had never come across it. People of his generation had never listened to it.”

Leaving the blues aside his musical development went the way of many budding performers – leaving school at 15 and playing the local folk circuit. He said “I had moved on to guitar by the age of 12 and I was in a band at school at 15, we used to do weddings and that sort of thing. I ran a club in Aylesbury for a while and Otway came to the club and sang a song. Eventually we recorded some songs in a studio near Maidenhead and it went from there.”

The Wild Willy Barrett produced ‘Cor baby That’s Really Free’ was the hit single that propelled Otway and Barrett into the limelight in the late 70s, and appearances on Top of the Pops and The Old Gray Whistle Test showed Barrett playing the first of the many unusual instruments that have become part of his repertoire. It was a guitar that had been made by his father. Barrett explained “That first song we recorded was with a guitar I called ‘the Les Dawson’. My dad had made it from an old scaffold plank. I came home one day and found this guitar hanging on the washing line. Funny old thing it was. He made another one, a slide guitar. He likes pedal steel and this was without the pedals. And that became the shitstick, me and Otway recorded Racing Cars with it. Dad’s 85 now and last year he made another one, another electric steel which I use with Otway. He’s like me, he likes making things rather than spend money buying them.”

Barrett’s introduction to making things didn’t come directly through his father’s influence though. Bizarrely it came about because he couldn’t afford to make sleeves for one of his albums. “I recorded an album called Organic Bondage. It was with a load of sculptured instruments made for me by some guys in Bristol. Unfortunately, we didn’t have enough money to make record sleeves. So I got all these sheets of plywood, made them into the album covers, and that’s how I got hooked on the woodwork.” One of his signature themes is to inlay unusual items into the wood, as Otway famously found to his chagrin one evening at the local pub. “Years ago, Otway left a Gibson Sg round at my place and it was kicking around for ages just getting in the way” remembers Barrett. “It was about six or eight hundred quid’s worth – so I inlaid it into a table. There was a pub asked me to make a table, so I inlaid this Gibson into it. I took Otway round for a drink there one night and he went ‘you b******!’ So that’s what started me using guitars in furniture. Now I saw guitars while I’m playing and that started with one of Otway’s guitars at Bray studios. So now I have these wrecked guitars that I can put into furniture. I had one commission from someone whose Dad was a musician, he used to play the trumpet and she had me make a lamp out of his old trumpet.”

These days Wild Willy Barrett’s life may appear to have a certain air of gentility. He lives on a barge on the Grand Union canal where communication comes through a postbox he made and stuck to a fence near where he is moored. I wondered how the word ‘wild’ came into his name. He said “The full story is that my name is actually Roger, and my English teacher, ‘Mr Spall’, called me a silly Willy in 1963, when I was messing around in school and it stuck, you know what kids are like. The ‘wild’ came later when I started working with Otway as a stage name due to a slightly misspent/educational period as a teenager.”

Uniquely talented and still wild, Willy Barrett has a wonderfully idiosyncratic view of the world and his wry humour is underpinned by a masterful musical ability.

Visit www.sleepingdogz.co.uk to find tour dates and purchase CDs. He and Otway will be playing a special one-off, ‘up close and personal’, gig at the Hawthorns in Glastonbury on 30 November. Tickets, which include a curry dinner, are limited so telephone 01458 831255 for reservations.