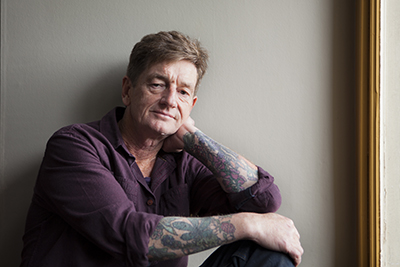 Nick Fisher’s first novel is due to be published in June. It is described as a dark and desperate tale of greed, crime, drugs, family and fear and is set in Weymouth. He talked to Fergus Byrne about where it came from and the characters involved.

A week ago Nick Fisher was deeply involved in a kidney transplant. This week it’s a heart transplant. It’s difficult to shake off a vision of his heavily tattooed arms peeking out from hospital surgery scrubs, his latex gloved hands raised in the air as a nurse helps ensure he is properly sterilized before entering theatre. Thankfully for Nick—and for me for that matter—it is all just theatre. He isn’t likely to be found wielding a scalpel whilst covered in another man’s blood. And his fingers, rather than sporting snugly fitting latex gloves, are more likely to be tapping out the whole gory scenario on a computer keyboard.

These days Nick is one of the core writers for the BBC’s Holby City, a British medical drama that airs on BBC One every week. Surgical transplants, car crash carnage and intravenous drips are all part of a day’s work for a man who has been writing TV scripts for decades. ‘Ah the kidney transplant’ he muses when I remind him of it. ‘That’s done now. Did she live or die? I can’t remember.’

Immersed in so much drama it isn’t surprising that in many ways such life-changing surgery could seem mundane and easily forgotten. But thankfully, when it comes to the detail Nick is surrounded by experts. ‘They’ve got very good medical researchers there’ he tells me. ‘Everything more or less comes from the doctor’s mouth. I’ve done so many; something like a kidney transplant is really quite basic. But what Holby loves is really exotic operations or very technological ones, and that’s when you have to do a bit more research.’ He recalls a recent heart operation that he worked on which had ‘only been done in two places in the UK so far.’ The operation used new technology and Nick had to understand the equipment involved, understand what it does and know why that’s different from everything else that’s been around for years. However, dramatizing it is something completely different. His job is to ‘make that information sexy, make the operation sexy and then make it go wrong and then go right.’ Giving the story its dramatic twists is the part that is most challenging, and that’s the part that makes use of his abundant talent.

It’s that talent and ability to pull viewers and readers into the engrossing and emotional depth of whatever scenario he is working on that makes Nick’s latest venture so appealing. In June he is publishing his first novel, Pot Luck. The book is based on a subject close to his heart and one with which Marshwood Vale readers may well be familiar. Described as “A dark, desperate tale of greed, crime, drugs, family, fear—and commercial crab fishing”, it is based in and around Weymouth and follows the antics of a cast of characters whose lives intertwine around an unusual catch during a fishing trip. As the man who hosted and wrote the TV series’ Screaming Reels and Dirty Tackle, and one who has written more words on fishing than JK Rowling has on Harry Potter, Nick is perfectly placed to spin a tale of intrigue on the choppy waters off the South Coast of England. Pot Luck introduces characters that are at times dysfunctional, opportunist, occasionally hilarious and often sad. However most of all they are very real and their adventures, or at least the adventure that brings them all together, has no shortage of twists and surprises.

In a show that he wrote many years ago I spotted a doctor named after a local person and mentioned this to Nick at the time. He explained that he often used real names when writing a character but occasionally forgot to change them when the script was approved. Thankfully it hasn’t led to too many awkward moments. In Pot Luck he admits that characters are definitely influenced by other people. ‘There’s a skipper in Weymouth that I gave it to read and he said he was going to look forward to watching all those Weymouth boys arguing about who’s who’ he laughed. ‘I have spent a lot of time on boats there and those kinds of characters are all around.’ The people in Pot Luck are not particularly descriptions of any one individual he says, but more ‘influenced by them.’ Even the boats reflect personality he explains. ‘From a gin palace to a barge on a canal. There are certain people that would love the barge and there are certain people that would love the gin palace. And then there are people that are forced to work on boats that they absolutely hate because they are ugly smelly things that aren’t working half the time, and it’s just about fitting characters in.’

Nick’s ability to write from within the mind of the person he is describing has the effect of sucking readers into the story that little bit more, enough to more than enhance their surprise at the unexpected. It’s an ability that he has honed through years of writing for television. ‘It’s kind of an extension of script writing’ he says. Using Holby City as an example, he explains that in every script you have guest characters, doctors, nurses and management. ‘You’ve got porters, you’ve got a whole spread of community and you have to write a voice for each one. And you have to write stories that resonate and relate to everyone. So you’re continually putting yourself into the head of other people. And I think with this book it’s the sort of writing that I like.’

It’s also the sort of writing that comes naturally to Nick. He wrote the bulk of the story, ‘which had been hanging around my head for years’, during a two week break from the day job of script writing. However with two thirds of the book written, he questioned what he was doing. ‘It wasn’t a vanity project and I wasn’t getting paid for it, so why should I finish it?’ he thought. If it hadn’t been for his family’s urging, that’s where it might have ended—on the writer’s equivalent of the cutting room floor. However, having read the first draft one of his sons tentatively asked how much it would cost to pay him to finish it. He was prepared to go out and raise the money to pay his Dad to complete the project. That did the trick. Nick finished it, coincidentally had a call from a publisher interested in his work and within days they had offered to take it.

There is a sweet poignancy to the story of Nick’s son offering to help pay to get the book finished. If the characters in his writing live very real and at times hair-raising or broken lives, they may pale in comparison to their creator’s experiences. Twice going through rehab, Nick has bared his soul and fought an army of demons to bring a solid structure back to his own life. ‘All my children know I don’t drink, they know I don’t smoke dope and they know why—with differing degrees of understanding’ he says ‘And they also know I go to meetings’. Explaining that he enjoys writing about how criminals mess up and make stupid mistakes, he describes himself as once being another useless criminal. ‘I had ridiculous pretentions of being a some sort of suave international drug dealer when I was younger and even more stupid’ he says. ‘My life all came very badly unstuck at an early age, with very dysfunctional, messy teens and early twenties, that involved getting busted for various things and messing-up quite badly. It wasn’t until my mid to late twenties that I ever really got writing or work together.’ And that despite his father, also a TV writer (Dixon of Dock Green, Hammer House of Horror and Dr Who) telling him, “Don’t ever become a writer”.

If Nick had followed his father’s advice and his own interests he might be a mechanic or a plumber now. ‘My sisters were very academic and I hated all that’ he says. ‘I didn’t want to go to university. Wasn’t clever enough. Instead I wanted a trade.’ The need to be different from his siblings and a wish to have an older brother character in his life led to an association and ‘apprenticeship’ with a heroin-addicted motor mechanic and years of petty semi-criminal activity. It all went horribly wrong for Nick Fisher when he was younger but with the help of those closest to him he eventually turned it around—unlike some of the characters in Pot Luck… But then you’ll have to read the book to find out about that.