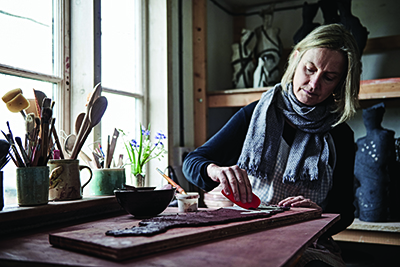 Sarah Hitchens is sitting in her garden studio, surrounded by her work, expressing an element of surprise at having finally arrived at this creative space. ‘Like many academic girls, I was discouraged from following art as a career’, she says. Describing herself as ‘an unhappy child’, she remembers spending a lot of time in her imaginary world—reading, writing and drawing—‘filling my bedroom with a riot of colour and disorder’. She recalls trying to continue her art education. ‘I did try to take Art as my fourth ‘A’ Level’, she says, ‘but it proved too much and I dropped it in the end’.

She ended up taking Art History at Warwick but quickly decided she ‘couldn’t bear the idea of a life spent looking at objects other people had made’, and concluded that it wasn’t the right career path for her. She then spent a number of years in London, doing whatever job came along, until a trip to India helped her to focus on the future.

It was after returning from her travels and spending some time on the Isle of Man, that she decided to train to become an acupuncturist. It was a career that spanned over twenty years, including a lot of community work offering affordable acupuncture sessions to people in Somerset. She describes loving the healing aspect of the work and the interaction with people, but ‘the urge to be creative was always biting at my heels’.

Sarah met her husband in 1994 and delighted in his creative family. ‘Their house was a fantastic universe of creativity with colour and form colliding with each other in every available space’, she says, ‘it was a place where it was the norm to create’. In 1999, she inherited her father’s kiln, wheel and all related equipment. ‘He had been a hobby potter’, she explains, ‘but suddenly I had everything I needed’.

However, it wasn’t until quite some time later that she finally bit the bullet and left her acupuncturist practise. ‘I was approaching fifty and feeling increasingly out of kilter. I knew I had to change tack and finally started to listen to the voice inside me that was screaming at me to express myself’. Having worked healing people over the previous two decades, she knew that you ignore those voices at your own peril. So, in 2012, she finally made the move from one career to another.

‘It was an exciting, challenging time’, she recalls, ‘I wanted to learn as much as possible, and set myself the task of throwing every day’. She sought out people who could help her and took classes with Tim Hurn (Master Potter), Chris Keenan (an apprentice of Edmund de Waal) and Sandy Brown. She also sought support from Somerset Art Works (SAW) and the Blackdown Hills Artists and Makers (BHAAM) art crit group.

Her hard work began to pay off when she was awarded a bursary to make new work for a group show with BHAAM. Encouraged by the shows’ success and fellow members of the BHAAM she started submitting work to open exhibitions. Very soon, her work was starting to gain recognition and was chosen to exhibit at Wells Art Contemporary, Salisbury Ceramics Open and, of course, The Marshwood Arts Awards.

Her work has changed since the beginning and she now finds herself drawn to slab work, that is assembling large blocks of black stoneware clay into shapes and doing less on the wheel. ‘The resulting forms were textured, haphazard, rough edged, raw and imperfect and I found huge satisfaction in them. I found myself encouraging the imperfections, delighting when the slab cracked or buckled and finding myself draw to the decay and imperfections of the world around me: rust on a fence, peeling paint, lichened bark, the faded bloom of mould on food’.

The coarse clay she uses contains grog—pieces of already fired clay, that give texture to the work. She also makes all her glazes from scratch, which are poured, splattered and randomly slip trailed; crawling and pitting are actively encouraged. ‘It is important to me to be as far away from smooth, white, perfect porcelain as I can take it’, she says.

Although her work is abstract, there is a subtle sense of the human form. There is a natural primitiveness about them which reflects her idea about stripping back to basics. ‘It is about us, in all our imperfect rawness’, she says. The cracks, textures and distress which appear on the objects represent the journey the piece has been on in its creation. The physical placing of the work is also extremely important to Sarah. ‘The work is about dynamic relationships’, she explains. The placing represents the physical form of the emotional intentions in our relationships.

Her greatest hope is that people feel empowered by looking at her work. There is no pretence, no traditional ‘beauty’, nothing ersatz in her pieces. ‘I want people to relate to the awesome, strong, unfettered beauty of the imperfect whole’, she says, ‘so in a way, I am still seeking to heal’. Sarah is also attracted to questions around authenticity—‘we are encouraged to lose touch with who we really are and make an enemy of the natural ageing process’, she says. The textures and shapes of a life lived, reflecting both the physical wear and the inner growth, are the subjects that interest her.

‘To me, being an artist means letting go of all the shoulds and listening intently to myself and the world around me’, she says. She looks for honesty in herself and others because, for years, she was so divorced from her creativity, she was unable to listen to herself. ‘As I grow older, there is no time to waste on living inauthentically’, she says.

Finally, she draws attention to her favourite quote by Louise de Bourgeois, pinned up on her studio wall. It reads—‘Art is a Guarantee of Sanity’. She expands by saying, ‘Art brings me back to my senses because in expressing what matters to me, I am able to be with myself and that is an incredibly healing place to be’.