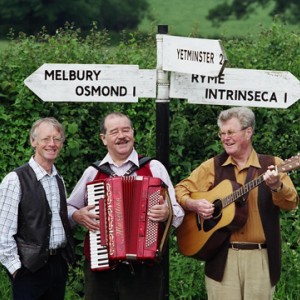 Bonny Sartin chuckles as he remembers one particular English teacher who had tried to get him to lose his Dorset accent. “I didn’t have a cultured accent as far as he was concerned” he says. “I’m very proud of Dorset; my family have lived around here for well over 300 years. I was born during the war, in a little cottage halfway between Sherborne and Thornford. No water, no electricity.”

For more than forty years, Bonny, along with his fellow Yetties, Pete Shutler and Mac McCoulloch, have probably done more to promote and educate the world about Dorset than anyone, especially that English teacher. His music teacher around the same time was just as unhelpful. “‘Oh you can’t sing. Sit down over there and read a book.’ he said to me,” remembers Bonny. “He wouldn’t even let me sing in class! I had the last laugh though.”

This year marks the 40th anniversary of The Yetties turning professional. It’s been an extraordinary journey and as is often said, you could write a book about their adventures along the way. Although they met in the Yetminster Scout Group and first sang together around the camp fire, the explanation that Yetties is simply short for Yetminster is not quite the whole story. Bonny remembers how it started. “The WI started folk dancing lessons in Yetminster Village Hall every other Tuesday night. On the other Tuesday it was modern dancing, the waltz and all that. Well the girls in the village came to join in and where the girls went, you know what ‘tis like, the fellas tend to follow. And we discovered this folk dancing was a contact sport – you could cuddle the girls without getting your hand slapped. We formed the Yetminster and Rhyme Intrinsica Junior Folk Dance Display Team and we used to go round doing dance displays around the village fetes and things like that. One time we were asked to go off and do a display in Hertfordshire in a place called Offley. So we zoomed off at the weekend in an old bus and the poor old bloke doing the announcing, struggling to get the name out said, ‘And now all the way from Dorset we have the Yetminst.. the Yetminster and Rhy… the what?.. oh the Yetties’, and the name stuck. We’ve lived with it now for nearly fifty years.”

A man who tends to look on the positive side of life, Bonny has seen many changes over the years. Not least of which is the change in the villages they once played at. He says, “A lot of places we do, like village halls, are spanking new now – probably thanks to a lot of Lottery money. Over the years we have performed in old village halls and then have come back to open the new ones! I tend to lean to the positive side of what’s improved rather than dwell on the losses.”

A lot has changed all the same and he remembers those early days with fondness. “The communication system has changed for a start,” he says. “When we got our first booking for the BBC Radio, the Light programme as it was in those days, 1965 I suppose it was. There was this producer from London – he’d heard about this band from Dorset from this funny little village of Yetminster and he was determined to get us on this live concert he was doing from London. But of course none of us was on the phone then! So what he did, he persevered and he actually rang the telephone box in Yetminster and fortunately the vicar happened to be passing, took the message, gave it to the publican in the White Hart who passed it on to us. So we went down there and put our thruppence in the slot and rang them back and that got our very first nerve racking radio programme.

“I was transport manager. I had a 1933 Ford 8 called Desdemona. But of course she wasn’t up to going to London. So we used to hire, for ten shillings a day – these big old cars from a chap, who was actually the signalman at Yeovil junction but as a sideline hired out these big old Vauxhalls. We used to hire those and beetle off to London. They were forever breaking down. “Then Mac and old Pete started playing the accordion. They had heard Jimmy Shand on the radio and fancied that. Actually what happened was that they bought two accordians – Mac played the Bass end and Pete played the right hand and then eventually Pete managed both ends. Then Mac bought a guitar, Bob played the drum and I kept dancing. It all developed from there.”
Prior to turning professional the boys set up a Folk Club in Yeovil in 1963. They booked people from all over the place – Julie Felix, Paul Simon “We gave him ten quid because he was so good” remembers Bonny.

“One day we had a letter from Jim Lloyd who was the front man for Radio 2 folk programmes, saying, I have heard you guys are working too hard and if you let me be your manager I could make you rich beyond your wildest dreams! He’s still a friend now and after thirteen years we parted, very amicably and he said ‘There you are I’ve made you solvent beyond your wildest dreams’. He was great. He got us our contract with Argo, part of the Decca set up. I’ve got the gold disc upstairs. We did thirteen or fourteen LP’s for them.”

Over the years although they have had adventures that have taken them as far as the wildest borders between Pakistan and Afganistan, where ‘life is pretty cheap’ as Bonny puts it, the music has changed little. He says, “The style in a way has not changed that much. Some of the songs we’ve been singing for forty years – some of the old traditional songs from Dorset. The turnover in material is actually quite low. Someone did a competition a few years ago about how many songs the Yetties actually recorded and at that time it was well over 600, and we’ve recorded quite a few since then. Now it must be 700 or so.”

So what about the future for the Yetties? “Well it’s a miracle the three of us are still standing with all the things we’ve done and some of the dodgy situations we’ve been in.” says Bonny. “When we turned professional forty years ago we thought ‘well we’ll give it three months and see what happens.’ You don’t know what’s coming round the corner and I like it that way. I’m coming up to retirement age but as long as they want me to stand up and sing I will. We’ll potter on and take things as they come. At a group WI meeting down near Taunton not so long ago, I had done this chat about the Yetties and our travels etc. and at the end asked if anyone had any questions. One lady in the front row, she said, ‘Well, it’s not really a question, but if you don’t mind me saying so, you’ve never grown up have you’. It was lovely and I thought ‘well no my dear and I ain’t gonna start now.’ So ‘tin’t all bad… ‘tin’t all bad.”
To find out about future concerts and other information about The Yetties visit www.theyetties.co.uk.